Turbo Install: We Add 200+ HP to a 5th-Gen. Camaro SS with a Turbonetics Turbo The 5th Gen Camaro SS (2010-2015 model years) left the factory loaded with power—425 ponies for a manual trans car or 400 in a 6L80E equipped 5th Gen. But even with all that power, the SS still has a lot of room to grow. Heads, cam, intake, and even larger displacement will net more power but involve major engine disassembly and down time.

Adding boost is an easy way to squeeze over 100 extra horsepower out of an engine without a complicated disassembly. While a supercharger, either roots/TVS/screw or centrifugal type, adds boost, they typically have heavy impacts on drivability in regular driving conditions when the extra power and boost isn’t needed.

The advantage of turbocharging (either with a single or dual setup) is the more controlled application of boost, easier tuning, and the lack of parasitic power loss to drive the turbocharger. While superchargers are driven off an engine’s crankshaft, turbochargers are driven by an engine’s exhaust. This means no engine power is expended to create boost, as opposed to a supercharger/blower. Turbonetics’ Reggie Wynn shared his thoughts with us on the recent increase in turbo popularity and the advantages they offer.

“Unlike blowers which require you to run a belt and adds more strain to the engine, turbos run off generated exhaust gases/flow. It’s also easier to adjust boost on a turbocharged application. Turbos are the way of the future. That is why you see more and more car manufacturers produce vehicles that come turbocharged from the factory,” Wynn said.

Traditional drawbacks of turbo kits were the fabrication for the feed and exhaust pipes and the mounting and space requirements under the hood. Turbonetics has made this a non-factor now with its new full system turbo kits for the Camaro SS. They include already-sectioned and pre-bent inlet and outlet piping, the necessary connectors to link everything up without need for welding, and the necessary accessories to relocate items underhood to make room for the whole works. And the new kits are 50-state-legal, and come with a preloaded tuner so you don’t have to find a shop for that later.

“This kit went through rigorous testing in the CARB Lab here in California, and it passed with flying colors,” Wynn said. “The key features that helped was keeping the factory cats, factory exhaust manifolds, and having the turbos get the exhaust after the cats. The kit comes as complete as you can get. It even comes with a tuner preloaded with an optimal computer tune for the car’s ECU.”

We took our 2011 Camaro SS test subject to Antivenom Performance in Seffner, FL, where Greg Lovell and Kyle Miller installed the kit and handled the before/after dyno testing. We got our Turbonetics turbo kit from Summit Racing. It included larger fuel injectors, special turbo plugs, and a preloaded tuner for the ECU.

Here are the before and after dyno results:

We picked up 211 horsepower and 213 foot-pounds of torque at the rear wheels, easily putting this SS on the same level as a ZL-1 or even a stock C6 ZR-1. Pretty impressive, especially considering that everyday drivability wasn’t compromised, and the power is smooth as silk when the turbo starts making its magic. And even better, it’s 50-state-legal.

See how the installation went below. 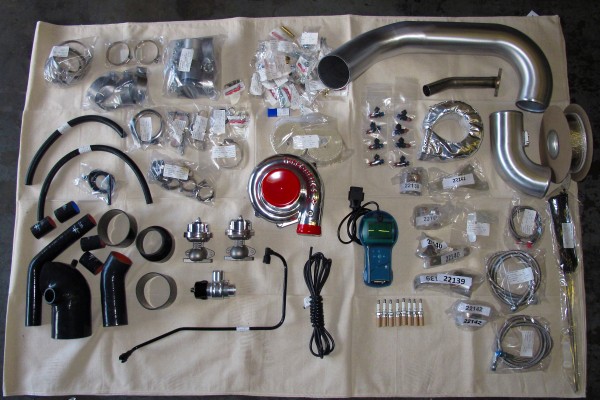 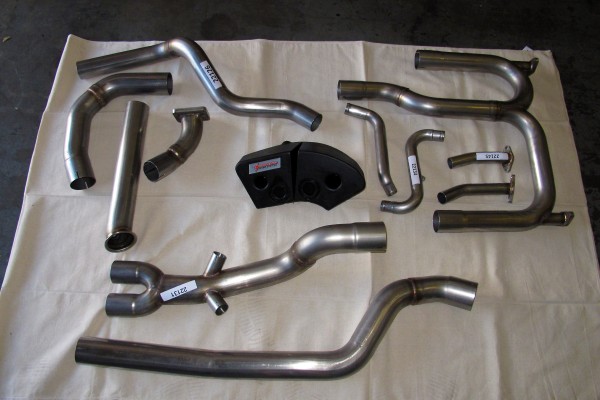 This is the complete Turbonetics kit and includes everything you need for the install, pre-bent piping, large fuel injectors, and a Diablosport tuner loaded with the optimal ECU calibration.

To get started the front nose cover has to come off the car, along with the actual steel bumper behind it, and the driver’s side headlight assembly. It’s all held in with clips and simple bolts, not difficult to remove.

The factory airbox is also removed to make space for the actual turbo. The filter and intake are relocated to the other side of the car.

The main fuse/relay box is also unbolted to be relocated. It’s a good idea to disconnect the battery during this install. The actual relay block removes from its retainer box so you can get to the bolts holding it on the passenger inner fender.

This elbow changes the position of the A/C pressure switch and is part of the kit.

The fuel rail needs to be pulled so the included larger injectors can be installed. This ensures you’ll always have plenty of fuel even when full boost is applied, greatly reducing the risk of a lean situation that could lead to detonation and engine damage.

Part of the install is splicing into the engine’s oil and cooling system to feed the turbo a steady supply of both. All the necessary fittings are included, along with precise instructions on how to install them without harming anything.

Coolant and oil are fed to the turbocharger to keep the bearings properly lubed and also cool no matter how hot the body gets from the exhaust passing through it. This greatly extends turbo life and reduces maintenance. BUT, it also means keeping up with your oil changes and regular cooling system flushes, and using quality products for both.

Because of the A/C and power steering lines passing so close to the exhaust feed piping for the turbo, we installed some Heatshield Products Thermaflect Sleeve to protect these lines from ambient heat damage, and keep the fluids inside them cool so neither would be adversely affected.

The air-to-air intercooler installs in front of the core support but will be behind the bumper. Everything in this area is a snug fit, but it fits without having to cut or grind anything.

Time to install the purveyor of magic and powah! The kit uses a T76 Ceramic Ball Bearing turbocharger that is controlled by two 35mm wastegates. It installs where the factory airbox used to be located.

The forward section of the exhaust system after the cats is cut away to make way for all the new turbocharger intake and exhaust piping. Everything is pre-cut and pre-bent for easy installation. The twin 35mm wastegates are located back here on each side of the car.

The more exhaust heat you have, the faster the exhaust gas velocity, and thereby faster the turbo spools up when it’s time for boost. That means keeping as much heat as possible on the hot side of the turbo housing is important. The kit comes with a standard turbo shield, but we upgraded to a Heatshield Products Lava Turbo Shield to keep even more heat in the system, and also cut ambient underhood heat even more. And, it adds some visual pop as well.

The stock washer fluid reservoir and radiator expansion/fill tank are removed, replaced, and relocated onto the driver’s side shock tower using the included new tanks.

The kit also includes new NGK TR6 spark plugs to replace the factory platinum plugs. When a turbo is used plug gaps are tightened from factory specs to make sure when boost is applied the spark isn’t “blown out” by all the extra air being forced into the combustion chamber. These are non-platinum plugs because they have to be gapped. Using platinum plugs is NOT recommended here because of their small electrode.

We performed a fresh oil change to go with the install, and upgraded to Royal Purple’s HPS 10W-30 synthetic oil and oil filter. High quality oil and filtration are a must for any turbo equipped engine, and Royal Purple’s materials are some of the best on the market.

The last thing to do is plug in the included Diablosport tuner and reflash the ECU with the specially developed turbo tune optimized for this system. The unit stores a copy of the car’s factory/stock tune in case you ever need it as well.

Once everything is all buttoned up, here’s how the engine compartment will look. Much more lively than before, the kind of engine compartment that will strip the paint off your house and give any bystanders a permanent orange afro. And until you open the hood, no one will have any idea the Hulk-level punch you’re packing because of the nice and quiet turbo versus an instantly recognizable supercharger whine.