If you own a 1979-93 Mustang or Mustang GT, you understand the limitations of the Fox-body Mustang’s four-lug hubs. Four-lug underpinnings limit your choice of aftermarket wheels and certainly tire size.

If you’re going to perform a four- to five-lug conversion on a 1979-’84 Mustang with the original 7.5-inch rear axle, it is suggested you also convert to an 8.8-inch rear axle. It’ll make the going smoother, and you’ll wind up with a stouter rear-end at the same time. Summit Racing has everything you’re going to need to get into five-lug durability and performance. We’ve opted for 31-spline direct replacement axle shafts from Motive Gear, which will provide durability and the convenience of five-lug performance.

Let’s get started! Scroll through the slide show below to see how the process went down. 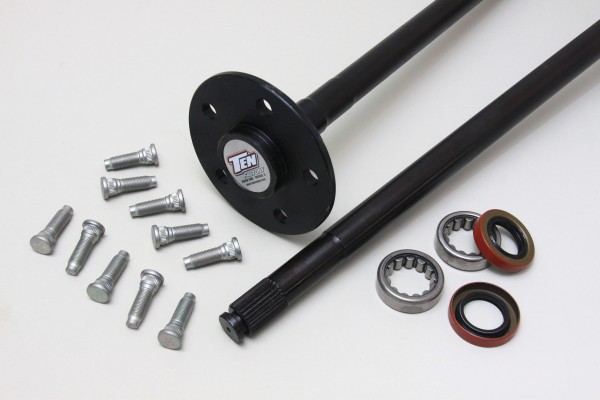 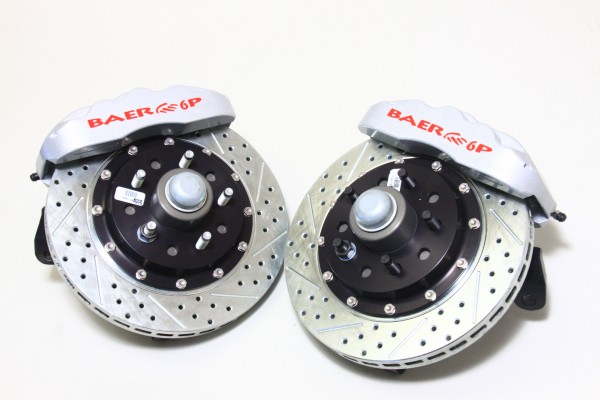 We’ve opted for five-lug 31-spline axles from Motion Gear for our five-lug conversion along with new bearings and seals. We’re going with longer studs to accommodate Baer disc brakes from Summit Racing.

In front, Baer 6-piston 14-inch disc brakes from Summit Racing make this four-to-five lug conversion a snap because the spindle and hub are included in the kit. All you have to do is remove the factory disc brake assembly and install these robo grip monsters.

This is the rear Baer Claw Pro+ disc brake kit from Summit Racing for the Fox body and SN-95 Mustangs with five-lug axle flanges. Rotors are drilled for 5 x 4.5-inch and 5 x 4.75-inch bolt patterns. The Baer Brakes Baer Claw Pro+ disc brake kits include brake rotors with zinc coated surfaces and a matched set of brake pads. The unique 2-piece rotors use an aluminum hat to reduce overall weight, allow for differential expansion of the rotor plates, and lower thermal transfer to the hub. Parking brake cables are not included with this kit.

These reinforced stainless-steel braided brake hoses offer stunning performance because they don’t budge under pressure. This affords you a firm brake pedal and optimum braking performance. Included in the Baer 6-Piston 14-inch binders is all the hardware needed for installation.

A look at the factory brakes.

Remove the factory single-piston calipers with the removal of two bolts as shown.

Bruce supports the spindle and strut as shown for spindle assembly removal. Remember coil spring pressure is enormous. Make absolutely sure the spring is contained and safe.

Factory spindle and backing plate are next to be removed.

Brake hose and line are disconnected as shown here. Make sure you have a catch pan for brake fluid. Never allow DOT 3 mineral-based brake fluid to touch painted surfaces. It will damage paint.

To accommodate the 14-inch Baer binders, we need larger wheels on the order of 16-inches and higher. Here are two examples — the 16-inch five-spoke and SVT Cobra wheel. Summit Racing offers a huge inventory of OEM and aftermarket wheels for your four- to five-lug project.

We like the ease of installation with the Baer 6-Piston. No bearings to lube and sweat out. Mount the entire brake and hub assembly, tighten castle nuts, and secure with cotter pins. Connect brake hoses and bleed brakes. It’s that easy.

We secure the spindle and brake assembly at the strut.

Castle nuts are tightened and secured with cotter pins.

Brake line connections must always have copper washers, which best compress and seal. Never use steel, aluminum, or brass washers.

Ford Mustangs didn’t get rear disc brakes until the SN-95 in 1994 — with the only exception being the 1984-'86 Mustang SVO. The SN-95 rear disc brake is fine as stock disc brakes go. However, nothing will stop you like a Baer. You can have your stock rotors re-drilled for five-lug, go with new five-lug axle shafts, or step up to Baer disc brakes.

Bolt and retaining pin are removed next to free up the C-clip and axle shafts. This pin keeps axle shafts seated and C-clip flush to where it won’t accidentally pop out.

C-clip is removed with a magnet as shown. This frees up both axles.

Four- and five-lug axle shafts side by side. If you’re staying with the factory drum or disc brakes, you will have to have the axle flange turned down by a reputable machine shop or have your four-lug flange re-drilled to five-lug using one existing bolt hole as a starting reference point.

With both Motion Gear axle shafts seated, C-clips are installed followed by the retainer pin and bolt. Be very careful with this bolt. The head is easily rounded off to where you will never get it out. Gently snug and torque.

Baer 14-inch rotors are installed next using spacers at the index to keep them centered on the hub.

When you step up to Baer or any other type of aftermarket disc brake and mag wheel, be prepared to install longer studs. You want at least ¼- to 3/8-inch of exposed stud once rotors and wheels are installed and tightened. If the stud doesn’t completely penetrate the lug nut with stud to spare, you need a longer stud.

Master cylinder size has no bearing on four- to five-lug conversion. However, if you’re stepping up to larger disc brakes, it absolutely does. Consult with your brake manufacturer to determine proper master cylinder bore and capacity size.