Off Your Rocker: 4 Reasons It Might be Time to Step up to Shaft-Mount Rockers 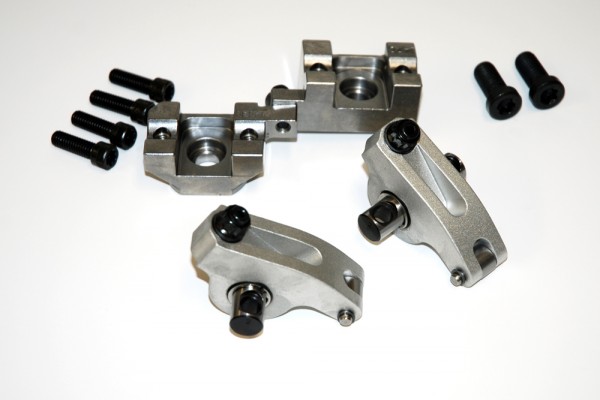 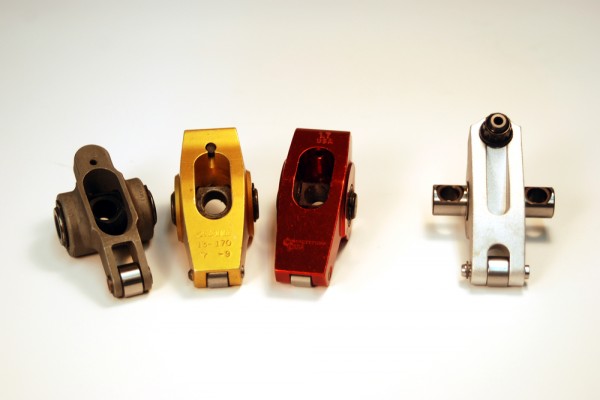 At first glance, most roller rockers look the same. What’s the big difference? Aside from the fact that the rockers on the left are stud mount and the rocker on the right is a shaft mount, there’s a bunch of difference. And yes, Summit Racing has all of the rockers shown available to you. More in the next photo…

This BBC Jesel shaft rocker might not look as fancy as a more common polished, anodized stud roller rocker, but looks can be deceiving. This rocker is machined from 7000-series aluminum alloy, and the surface has been shotpeened. Jesel notes “shotpeening induces an even, compressive stress layer in the surface of the rocker body.” What does that mean? Simple. It increases the rocker’s resistance to failure due to fatigue, which in turn, increases the cycle life of the rocker arm. FYI, you can also purchase shaft rockers manufactured from 2024 alloy or from steel.

Viewed from the bottom side, this rocker is “centered”. That means no offset has been built in. Typically, you can order rockers for just about any cylinder head combination out there. If the head is designed with a pushrod offset, then the rocker can be specified with a matching offset.

This Jesel big block rocker has a pivot length of 1.650 inches. It is a standard model with a lightening slot in the center. The weight is 202 grams. A solid body model tips the scale at 210 grams while a highly profiled rocker (Jesel calls those model series “Mohawk”) weighs 195 grams. In comparison, we weighed a common stud mount standard roller rocker, and complete, it weighs approximately 194 grams. There goes the theory that shaft rockers are way heavier than stud mount jobs.

The bearings for the shaft are most often of the needle variety (typical of most roller rockers, shaft or otherwise). This particular Jesel shaft rocker incorporates Timken bearings. There are also shaft rockers available today that operate without bearings. Instead, a special bushing is used.

There are several different tip roller setups used on shaft rockers. This is a standard roller but you can also specify needle-bearing roller tips in varying sizes (Jesel offers options of 0.250-inch diameter or 0.360-inch diameter). Needle bearing tips are designed for use in high lift, high spring pressure applications where in certain cases, the roller can “stall” (stop rolling) and consequently skid across the valve tip. Tips can be locked in place with a heavy c-clip device or they can simply be pressed into place, depending upon the rocker.

The adjuster system used on a shaft rocker is considerably different than that found on a stud mount rocker. In a stud mount rocker adjustment is accomplished right on the stud (which basically determines how much the rocker can move up and down on the stud). On a shaft setup, adjustment is set on the pushrod. Once you set the lash, the rocker simply rotates to take up the lash. There’s no real trick to setting lash on a shaft setup either--just like a conventional rocker, the feeler gauge goes between the valve tip and the rocker tip. Only the adjustment location differs.

Here’s an up close look at the jam nut and adjuster screw used on the standard Jesel rocker. The jam nut is a 12-point model (7/16-inch box end wrench) while the actual adjuster uses a 1/8-inch Allen key. Jam nuts are typically heat-treated alloy steel on standard and lightweight rockers. Several different types of adjusters are available, including tool steel ball lash adjusters, however most of those are used in NASCAR applications. Ball lash adjusters offer less friction than cup format adjusters, and they’re a bit stronger because they increase the adjuster area by eliminating the counter-bore for the standard cup. Keep in mind a ball lash adjuster mandates unique pushrods.

Jesel notes that the operating range for the lash adjuster is ¼ to 2 full turns out from the seated position. If the adjuster needs to be set more than two turns out, this means the pushrod must be 0.050-inch longer. If the adjuster is set less than ¼-turn turn from the seated position, that means the pushrod must be 0.050-inch shorter...

...That’s why a pushrod length-checking tool set (second photo) is included with many shaft rocker setups.

Stands for shaft rockers are configured for each type of cylinder head (and as you can imagine, the combinations are staggering).

Jesel includes a 3/8-inch drive Torx socket with each rocker shaft kit. In this application, there are several ports where the hardware protrudes into the port. Obviously, in each of these ports, sealant has to be used on the fastener to eliminate vacuum leaks. Additionally, if longer than stock valves are used, you’ll have to shim the rocker stands to maintain valve train geometry.

When Chevy’s small block debuted in 1955, it didn’t take long for it to be regarded as a marvel of performance engineering, particularly when it came to its innovative valvetrain. Its lightweight, ball and stud, stamped rocker arm configuration allowed it to turn unheard of (for that era) engine speeds. It wasn’t long before examples with solid lifter cams nudged the tach to 7,000 rpm or so on each of the gear changes. That was a bunch back then, especially for a pushrod engine.

Naturally, racers began to push the performance envelope even further with stiffer valve springs, more-aggressive camshafts, and poly-locks to maintain valve lash. Soon, rocker studs were pulling out of the heads. To remedy the situation, hot rodders would pin the studs or make the switch to screw-in rocker studs. Eventually, the stud girdle was invented to handle higher spring pressures and highly aggressive cam profiles.

Rise of the Shaft-Mount Rocker

The stud girdle essentially ties the valvetrain together and eliminates excess movement, but it can also create a headache when it comes time to set the valves. Typically, you first loosen the stud girdle, and then you lash the valves. The girdle is re-tightened and finally most folks check the valve lash once more. If the studs are the least bit out of alignment, tightening the stud girdle changes the valve lash. If you have one, you know the drill (and it’s not fun). And then there’s the issue of clearance on some combinations—the rockers and girdle can touch and cause a whole lot of grief!

And here’s something else to ponder:

In a small block Chevy application, the stock rocker has a relatively short pivot length. This implies the arc it travels in is small, particularly in comparison to other engines (Jesel notes that the stock small block has a rocker pivot length of 1.40 inches; the big block has a pivot length of 1.65 inches). This means the stock small block rocker arm tip scrubs across the tip of the valve as it opens. While this isn’t much of an issue at lower gross valve lifts, you’ll encounter a huge problem when you dramatically increase the lift and/or spring pressure: increased friction.

Obviously, a considerable reduction in friction is huge, but a shaft rocker also offers far more stability at high rpm.

Using the small block Chevy as an example, the pushrod, the rocker stud, and the valve are not always in line. This isn’t much of an issue with stock stamped rockers and low valve lifts, since the stock rocker can more or less compensate. However, a conventional stud mount roller rocker replacement cannot “fix” the misalignment on more aggressive engines. Since shaft rockers allow you to adjust geometry, they are inherently more stable at higher rpm.

Reliability is a big bonus with shaft rockers, too.

A stud mount rocker slides up and down the stud, taking up the valve lash prior to opening the valve. At high engine speeds, the rocker acts like a slide hammer trying to peel the rocker stud right out of the head. Shaft rockers tend to be much easier on valve guides, valve seats, and valve tips, since the longer pivot length in a shaft rocker doesn’t side-load the valve as much as a stud mount rocker.

Ratio choice is another big benefit.

Rocker arm ratio is determined by the relationship between the pushrod cup, the rocker shaft centerline, and the roller tip. In a shaft rocker, assorted pivot lengths can accommodate a wide range of ratios from 1.5:1 through to 2.25:1. That wide range simply isn’t practical in a stud mount rocker.

So is increased rocker ratio important?

Absolutely. That’s why a number of engine builders in all forms of motorsports (drag racing, oval track and endurance racing) turn to the rocker arm instead of the camshaft as a means to increase valve lift. The use of varying ratio rocker arms allows for finite “tuning” on a per-cylinder basis. Plus, it allows you to test the power levels of varied net valve lift without the cost and time constraints of cam swaps.

The biggest bonus with shaft rockers is the ultimate improvement in the geometry of the valvetrain.

In order to change valvetrain geometry you have to move the rocker’s pivot point. Again, that is simply impractical with stud mount rockers; however, with a shaft system, the rocker pivot is moved further away from the valve to allow a longer rocker “pivot length.” In some shaft rocker systems (Jesel systems, for example), the manufacturer lowers the pivot point as well for a low pivot arc from half to full-valve lift—right where spring pressures are the highest. This improved geometry eliminates much of the friction caused by the rocker “scrubbing” across the valve tip. Obviously, the big gains here are in both power and reliability.

In the end, today’s rocker arm technology just may be the primary reason why the “old-fashioned” pushrod engine is still hugely competitive today.

3 responses to “Off Your Rocker: 4 Reasons It Might be Time to Step up to Shaft-Mount Rockers”