565 To Go: How Summit Racing’s 565 Big Block Anvil Came Together 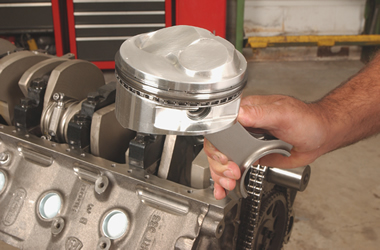 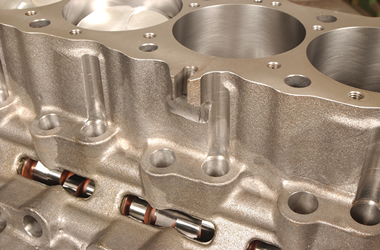 By the time we got to Marco Abruzzi’s shop, the Eagle Specialties steel crank, seven Eagle/JE rod and piston assemblies, and the COMP Cams roller cam were already in the Dart Sportsman block. Marco did save one rod and piston assembly to show off. The rods are 6.385-inch Eagle steel H-beams fitted with ARP 2000 rod bolts; those bolts make the Eagle rods good for 1,200 horsepower. The off-the-shelf JE forged pistons are gas-ported to improve top ring seal and reduce friction. The ring package is .043-inch top, 1/16-inch second, and 3/16-inch standard-tension oil; they must be file-fit to the cylinder bores. Compression is 13.9:1.

The Dart Sportsman block comes fully machined, including deburring and finish plate-honing and decking. Even the cam bearings and freeze plugs are installed. The lifter bores accept .903-inch diameter roller lifters (stock big Chevy lifters are .842-inch). The larger lifters allow the use of more aggressive cam profiles without sacrificing reliability. That boss in the center is for one of the blind cylinder head studs; there are two on each head.

After tapping the last rod and piston assembly into its bore, Marco torques the rod bolts to 75 ft.-lbs. Want to know what the biggest difference between the Sportsman block and Dart’s Big M block is? The Sportsman uses these ductile iron caps, while the Big M gets steel caps.

900 horsepower + oil starvation = bad juju. That’s why Summit Racing specified a Moroso billet aluminum high volume, high pressure oil pump for the 565. It features an efficient spur gear drive, anti-cavitation slots and feeder grooves, and an enlarged bypass area in the housing that bleeds oil back to the inlet side of the pump.

This photo gives you a good look at the Eagle Specialties crankshaft. Forged from 4340 steel, the crank is heat treated, stress relieved, and shot peened. It is crossdrilled and has chamfered oil holes to improve main bearing oiling. A .125-inch radius on the main and rod journals prevents stress cracking. The crank and rods are available from Eagle fully balanced for use with the JE pistons used for this build, saving you a trip to the machine shop.

Marco degrees in the COMP Cams Drag Race Series roller cam. The solid roller stick specs out at .277 degrees/.292 degrees duration @ .050” (.310 degrees/.330 degrees advertised) and .800 inches of valve lift. The cam is “4/7” grind—cylinders 4 and 7 switch places in the firing order. The idea is to add a few extra high-rpm horsepower and more importantly, reduce crankshaft harmonics for longer engine life and reliability.

A Summit aluminum timing cover is bolted into place. The die-cast, one-piece cover has extra-thick gasket rails for rigidity and optimum sealing. Underneath the cover is a Cloyes Hex-A-Just double roller timing set. The Hex-A-Just features billet steel gears and the ability to adjust timing virtually anywhere, up to +/- 6 degrees.

Care to guess whose cylinder heads studs were used? The ARP Pro Series head studs are rated at 190,000 psi tensile strength—not much short of a nitrous pop or blower meltdown will hurt them. ARP assembly lube is used on the threads.

Here’s how the blind head studs attach to the block. The aluminum retention blocks are included with the Pro 1 cylinder heads.

If Crower stainless steel shaft mount rocker arms sound like overkill, consider the tremendous abuse the valvetrain sees at 7,000 rpm. Shaft rockers won’t flex like stud mount rockers do—and Crower’s stainless shaft rockers are as close to bulletproof as you can get. That means more stable valve timing and longer valvetrain life. The 1.7 ratio rockers are a bolt-on for the Dart Pro 1 heads—no machine work is required.

MSD supplied one of its Flying Magnet crank triggers and this Pro-Billet Crank Trigger distributor. Since the crank trigger takes care of ignition timing, the distributor’s job is simply to route spark to the plugs—the only component underneath the low profile cap is the rotor. Other features include a CNC-machined billet aluminum housing, an oversized steel shaft and Rynite base to handle high voltage, and dual O-rings at the housing base to prevent oil leakage.

Big cubic inches need lots of cooling. This CSR electric water pump delivers 35 to 37 gallons of water per minute and draws just 5.8 amps of electricity to do it. The pump weighs a mere 5 1/2 pounds and features a CNC-machined billet aluminum housing, a stainless steel shaft, an RF suppression circuit, and a removable center section that allows access to the timing cover. CSR also supplied a Platinum Pro high torque starter and a SFI 29.1-approved Torque Master steel flexplate.

The TCI Rattler looks like a harmonic damper, but don’t let TCI hear you call it that. The company calls the Rattler a vibration absorber—it utilizes nine internal rollers to literally absorb torsional crank vibration and twist throughout the engine’s rpm range. That means a smoother running engine and longer crank and bearing life.

One 565-cubic-inch racin’ engine, ready for a trip to the dyno at Ross Racing Engines. Sharp eyes most likely noticed the Moroso vacuum pump on the passenger side cylinder head. The pump’s mounting bracket is designed for use with a front motor plate, but space issues forced Marco to mount the pump on the head and cut the crank mandrel to get the accessory pulleys to line up.

The first power pull showed the 565 clearly wanted more fuel, so Ross and Tony Lombardi progressively rejetted the Quick Fuel carburetor. #97 jets on primary and secondary sides did the trick—the 565 made 920 peak horsepower at 7,500 rpm, and 726 foot-pounds of peak torque at 6,300 rpm. The torque curve was especially impressive—over 600 ft.-lbs. from approximately 4,600 rpm up to redline.

Convinced the 565 had more power lurking within its cast iron guts, Summit Racing tapped Willy’s Carburetors for one of the company’s Holley Dominators. Rated at 1,250 cfm, the carburetor features patented metering blocks with adjustable, external metering valves. A simple turn of a hex head knob lets you rejet both primary and secondary sides without the hassle of removing the fuel bowls.

Dyno results are cool and all, but the proof is in the time slip. Marco bolted the 565 into his IHRA Top Dragster and took it to Quaker City Raceway, where he won class in the track’s Saturday night program. At a test and tune at Summit Racing Equipment Motorsports Park, the 565 rewarded Marco with a 7.48 second/176.60 MPH pass. And at an 1/8-mile, run-what-ya-brung Quick 16 event, Marco gave the big block a 250-horsepower shot of nitrous and qualified third with a 4.44/157 (approximately 6.85/190 in the quarter-mile). “I was competing against some serious players with really big cubic inch engines,” Marco told us. “People were impressed that my “little” motor ran as hard as it did.” There’s no higher praise for a race engine than that.

Drag racers can be a discontented bunch. If a car is quick, it’s still not quick enough. Running five miles-per-hour faster is cool, but a couple more would be cooler yet. Cut a .010 reaction time? Gotta be a .005 next round.

That urge to do better naturally extends to horsepower. Things like reliability and cost are important factors, of course, but it’s horsepower and torque that get bracket heroes and Pro Stockers alike all jazzed up.

Summit Racing Equipment noticed there was a place for an engine package that would meet the power, durability, and affordability needs of bracket and sportsman-class racers. The company enlisted two-time IHRA Top Sportsman champion Marco Abruzzi to help spec out the combination.

Why 565?
Since the big block Chevy is used in more classes than any other (including its small block brother), engine choice was a no-brainer. Marco and Summit Racing’s Kirk Heinbuch, a longtime drag racer, settled on a 565-cubic-inch setup (4.600-inch bore, 4.250-inch stroke, 6.385-inch rod). They listed several good reasons for their choice:

Marco and Kirk focused attention on durability and ease of assembly.

“Horsepower is useless if the engine is always breaking parts,” Heinbuch said. “We built a lot of durability into our 565. For example, we used Crower stainless steel shaft rocker arms. They cost more than stud-mount rockers, but they provide rock-solid valve control and will probably outlast the rest of the engine.

“Another thing that we took into account is machine shop work. With our 565, the machining is already done—the block is final honed and decked, and the reciprocating assembly is avalable already balanced for the recommended JE pistons. Other than fitting pistons on the rods, file-fitting the piston rings, and normal prep, you can begin assembling our 565 the day you get the parts.”

Let’s take a look at the basic components in Summit Racing’s 565:

On the Dyno
Marco assembled the prototype 565 in his home shop; he added a CSR electric water pump, starter, and flexplate before hauling the engine to Ross Racing Engines in Niles, OH for dyno testing.

On the initial power pull, the 565 made 866 peak horsepower and 682 ft.-lbs. of peak torque. Ross Racing owners Ross and Tony Lombardi knew power was left on the table. They progressively richened the jetting on the Quick Fuel carburetor, eventually settling on #97 jets all around (equal jetting on primary and secondary sides). That did the trick—peak horsepower climbed to 920 at 7,500 rpm, with peak torque coming in at 726 ft.-lbs. at 6,300 rpm.

Kirk then added a new wrinkle—a 1,250 cfm Holley Dominator from Willy’s Carburetors. Well known for its circle track and NASCAR-spec carbs and fuel systems, Willy’s also does the Dominators for Summit Racing-sponsored Pro Stock drivers Greg Anderson and Jason Line. The company wanted to test a prototype of a new drag race carburetor it had developed, and Kirk volunteered the 565 as a guinea pig.

Swapping the Willy’s carb for the Quick Fuel air/fuel mixer produced results—942 horsepower at 7,200 rpm and 746 ft.-lbs. of torque at 6,200 rpm. The only tuning needed was setting the metering block valves two clicks richer.

At the Track
After the dyno sessions, the 565 (with the Willy’s carburetor) went into Marco’s Undercover Chassis Top Dragster for some real-world track testing. On his first outing, Marco won class in IHRA-sanctioned Quaker City Raceway’s Saturday night program. During a test and tune session at Summit Racing Equipment Motorsports Park in Norwalk, OH, the 565 rewarded Marco with a 7.48-second/176.60-mile per hour pass.

Summit Racing has all the parts you need to build this very engine on its shelves right now You buy the components separately, or in combos for the cylinder heads, valvetrain, and induction/ignition. That means you can build an engine just like this one, freshen an existing engine, or piece together a different combination. Considering the dyno and track results, though, it’ll be pretty tough to outdo Summit Racing’s 565 To Go.