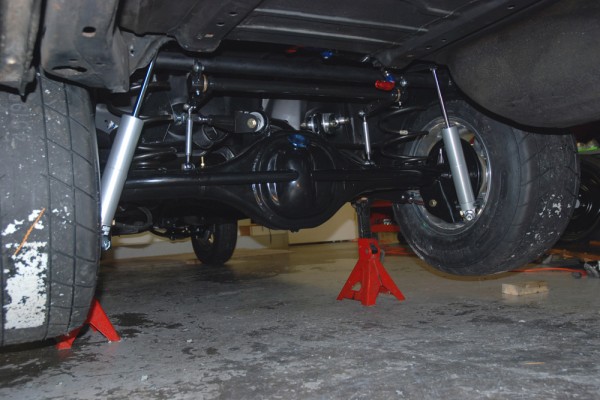 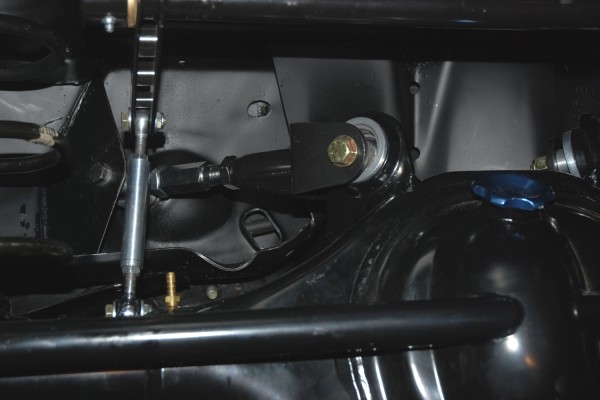 Here’s a look at an adjustable upper trailing arm fitted to a GM G-body. The adjuster is at the front of the bar. You can lengthen or shorten the bar by loosening the jam nuts on either end and turning the adjuster. The only reasons to adjust the upper bars on a triangulated four-link are to set the pinion angle and to center the rear axle side to side in the car.

The upper trailing arms are pretty much in the stock location. Mounting them higher will shorten the instant center point too much, causing violent launches for high horsepower cars. See the text for more information.

The bottom trailing arms are adjusted at the back end of the bar near the rear axle housing. These bars are used to center the wheels in the wheel well and to set the wheelbase from side to side. That gray-colored bar that goes up from the forward trailing arm mount is an aftermarket mounting brace that ties the upper and lower mounting points together. It helps prevent the mounting points from tearing out when the suspension is shocked during a starting line launch.

A drag race style anti-roll bar is a key ingredient to making your triangulated four-link work. In simple terms, it keeps the body from roll rotating on the launch. Bars like this are typically welded into the chassis and tied to the housing by adjustable links. An anti-roll bar can also be mounted on the rear axle housing.

These are BMR upper trailing arms for 1979-2001 Mustangs. The bushed end has a Teflon®-lined QA1 stainless steel spherical bearing (rod end) with a stainless steel spacer. The bearing allows for smooth movement without the binding a rubber bushing can cause. Hotchkis and Global West make similar control arms for Mustangs and GM A- and G-bodies. Photo courtesy of BMR

If you have a Fox-body or SN95 Mustang, a 1980s GM G-body (Grand National, Malibu, El Camino, etc.) or something like an early Chevelle or a GTO, it has a triangulated four-link rear suspension. This type of suspension has coil springs and upper and lower trailing arms (also called control arms). The upper arms are angled to form the triangle that gives the suspension its name. Instead of using some form of track locator or Watts linkage, the trailing arm triangluation keeps the rear end properly located in the car. That saved the factory some money.

The system works well enough on the street, but not so well when it comes to hooking up at the drag strip, especially with big horsepower. So how do you make it work? There are three items to address: shocks, anti-roll bar, and adjustable trailing arms.

A triangulated four-link puts the instant center (I/C) location—the imaginary point of where the rear suspension components intersect, and the point they rotate around in a given (instant) position–way out front, often close to the engine. The instant center is also rather high; the angles of the bars can raise it somewhere above the front wheel spindle.

That’s not necessarily bad. Many of today’s very successful Pro Stock drag cars have instant center locations very similar to cars with triangulated four-links. Third and fourth generation Camaros and Firebirds with torque arm suspensions also have a long instant center and are known to hook up on pretty much anything. You’ll find that an instant location similar to stock is actually close to optimum, provided you don’t jack the body way up in the air.

The problem with some trailing arms made for Mustangs and GM’s A- and G-bodies is they tend to create a very short (further from the engine) instant center by changing the angle of the bars. That can work for a mild street or bracket car, but will make a high-horsepower car react violently at launch. Just as bad, some of the top-mount arms (ones that physically raise the upper trailing arm location on the rear end housing) have a tendency to hammer the trunk floor when you get on the throttle. Avoid these types of trailing arms for drag racing.

Adjustable trailing arms will allow you to set the static pinion angle. In order to keep the driveshaft and U-joints operating in a (more or less) straight line when you’re on the throttle, the pinion angle has to be correct. As the suspension in a car “wraps up”, the pinion is driven upward. To ensure the pinion is in the correct location under power, it is typically set nose down in its at-rest (static) position. Pinion angle is measured between the pinion gear flange and the driveshaft.

Preload is another tuning tool to counteract body roll rotation. In a high horsepower car, engine torque tends to rotate the car so the right rear tire has more bite. In turn, that bite tends to move the car toward the left. You can counteract this force by preloading the suspension. In a car with a non-triangulated four link, you can shorten the upper right trailing arm to increase the preload on the right rear tire. If you lengthen the same bar, more load is placed on the left rear tire.

On cars with triangulated upper control arms, you can’t set preload with adjustable arms. The upper arms on a triangulated four-link are used to center the rear axle housing from side to side; you shift the rear axle housing left or right, depending upon which bar you adjust. Adjustable lower bars are used to center the tires front to back in the wheel well and to make small wheelbase changes.

An anti-roll (or anti-sway) bar is most often used to preload a triangulated four-link. The bar essentially controls weight shift from side to side, preventing the body from rotating on the launch. That helps equalize traction to the rear tires.

Following the anti-roll bar, you can use adjustable shock absorbers (front and rear), front suspension limiters, and to a lesser degree, specific coil spring rates to get the car to hook up. But as you’ll see in the photos, adjustable trailing arms are the first—and best—method of setting up a triangulated four-link for drag racing.