How to Choose an Alternator 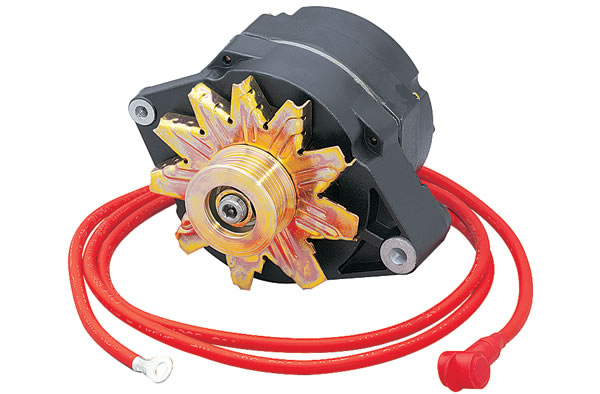 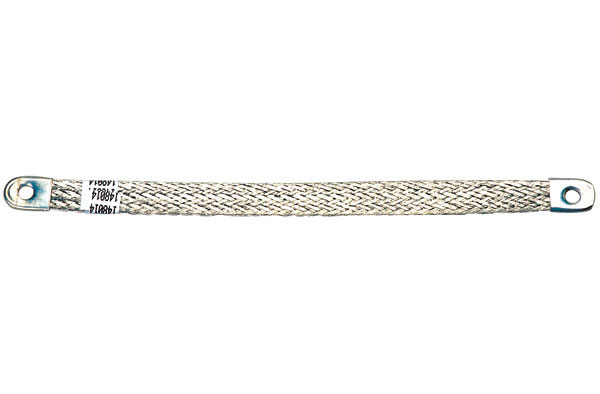 This Powermaster 140 amp alternator (PWM-8-57140) comes with a unique one wire regulator to make installation easy. The only thing required to hook it up is a charge wire from the battery terminal on the alternator to the positive terminal on the battery-your stock wiring harnesses can just be secured out of the way. It fits a wide variety of Ford trucks and Jeeps. Powermaster also has 200 amp alternators for late model 4.6L V8 applications.

A high-amp alternator's output can be negated by a charging wire or cable that is too small to handle it. The more amperage an alternator produces, the bigger the cable required. A 140 amp alternator, for example, requires a cable from 2-gauge to 00 gauge depending on the length (refer to the Charging Cable Gauge chart in the story). This Taylor Diamondback cable features a multistrand copper conductor with a polyethylene insulator, braided alloy cover, and solid brass terminals.

Any alternator can deliver "feedback"-feeding the electrical system power even when the system is shut off. That's what causes the infamous engine run-on when you switch off the ignition. Painless Wiring makes this Alternator Shutdown Kit (PRF-50105) for high amp alternators. It has a 250 amp solenoid that prevents the alternator from feeding voltage back to the electrical system. It's recommended for racing and should be used with a master battery disconnect switch.

Even a big honkin' alternator needs some help when it comes to handling power-draining audio/video systems, digital ignition systems, neon lighting, and more. That's where a battery with a large reserve capacity comes in. This Optima Group 31 battery has a 155 minute reserve capacity, plus 1,125 cranking and 900 cold-cranking amps of power. You could probably light a small town with the thing!

The fact is, not having enough amps to properly feed your vehicle’s electrical accessories can DOA a typical OEM electrical system. While it does have some reserve power for small accessories, the extra amperage draw created by a high-power audio system (or race electronics, or lighting, etc.) can cause a stock electrical system to literally melt from the inside out.

Luckily, a simple alternator upgrade can prevent such a catastrophe. We’ll guide you through the alternator selection process, how to decide whether you need an upgrade, how to find the proper size alternator, and tips for getting the most out of your new alternator.

Do You Need a High-Amp Alternator?

Deciding if you need a more-powerful alternator is easy once you understand exactly what kind of power, or amperage, you need.

Most factory alternators are rated at 65 to 100 amps and are capable of handling a vehicle’s basic accessories—headlights, gauges, fuel pumps, transmission, A/C, etc. While many alternators have a 10-percent to 15-percent power reserve to handle additional accessories, this is often insufficient capacity to power high end audio systems or other high-amperage items.

For example, a typical 500-watt stereo system draws upwards of 60 amps when cranked. A stock vehicle’s electrical accessories draw an additional 60 amps total. To run 120 amps’ worth of goodies with an 80-amp alternator, it will have to run at 100-percent capacity—and draw reserve power from the battery—with no cool-down time. The result is predictable—drastically reduced alternator life.

If you’re looking for hard evidence that you need to upgrade your alternator, take a look at your voltmeter. When you are drawing reserve power from your battery, the voltmeter will read below 12.7 VDC. If your voltmeter spends a lot of time below that figure, you are surpassing the maximum capacity of your alternator.

Choosing the Right Alternator for Your Vehicle

Selecting the right alternator comes down to figuring out your vehicle’s total electrical load. The most accurate way to determine electrical load is with an ammeter. With the engine off and the battery charged, connect an ammeter in series with the battery’s ground terminal. Switch each electrical component on and off, noting their amperage draws. Add up the total ammeter readings. Your alternator output should be 50 percent greater than that figure.

If you don’t have an ammeter, you can estimate electrical load by checking the accessory fuses. The amp ratings will be slightly higher than the highest draw of each component , but the sum of all fuse ratings will give you a general idea of the vehicle’s electrical load.

This chart shows the amperage draw of common electrical accessories:

Amp Draw of Some Common Accessories

A good-quality, high-amp alternator can also help you gain horsepower. While most alternators are only about 75-percent efficient (some power is lost in the form of heat and wind resistance from the cooling fins), a higher amp alternator will recover lost horsepower by allowing your electrical system to run at maximum voltage.

Getting the Most From Your Alternator

Here are some ways you can get optimum performance from that new alternator:

Like most things, an alternator is a compromise. It strike s a balance between drawing power from the engine (via the drive belt) and delivering back that power by helping the ignition system perform at its peak. By using the proper size alternator, you can tip the balance of power in your favor and create a horsepower gain.

By using the following formula, you can determine the amount of power it takes to operate an alternator (where 745.7 equals one horsepower and a 25-percent alternator efficiency loss is assumed):

Let’s apply the formula to an alternator that produces 57 amps at 14.9 volts:

As the formula shows, this alternator doesn’t take much horsepower to operate. And by supplying the proper voltage to your electrical/ignition system so it operates at peak efficiency, the alternator can actually help your engine produce more power—more power than it takes to operate the alternator itself.

Keywords
how to choose an alternator
Share this Article

43 responses to “How to Choose an Alternator”