Meet the hidden gem that helped start the LS-swap craze.

The LM7 (along with its L59 FlexFuel E85-capable brother) are the Gen. III, 5.3L iron block truck engines you can pick up in wrecking yards for about $600.

There were a couple key areas where the LM7 excelled:

1. It makes sense for engine swaps.

Fully dressed, it’s a bit lighter than Gen. I/II engines and easier to find one in good shape. Even bottled up and 25 cubic inches smaller, it matched the power and torque of the F-body LT-1’s. The later 2004-07 versions were right there with the C4 Corvette’s LT1. With the availability of engine swap kits, it just makes good sense to use Gen. III/IV engines.

The aluminum blocks made good power naturally aspirated, but they aren’t the best choice with big boost and nitrous. Although the iron block LM7 is a bit heavier, you can really pour the coals to it. Because of their strength, these engines are likely to see a power-adder sooner than later. 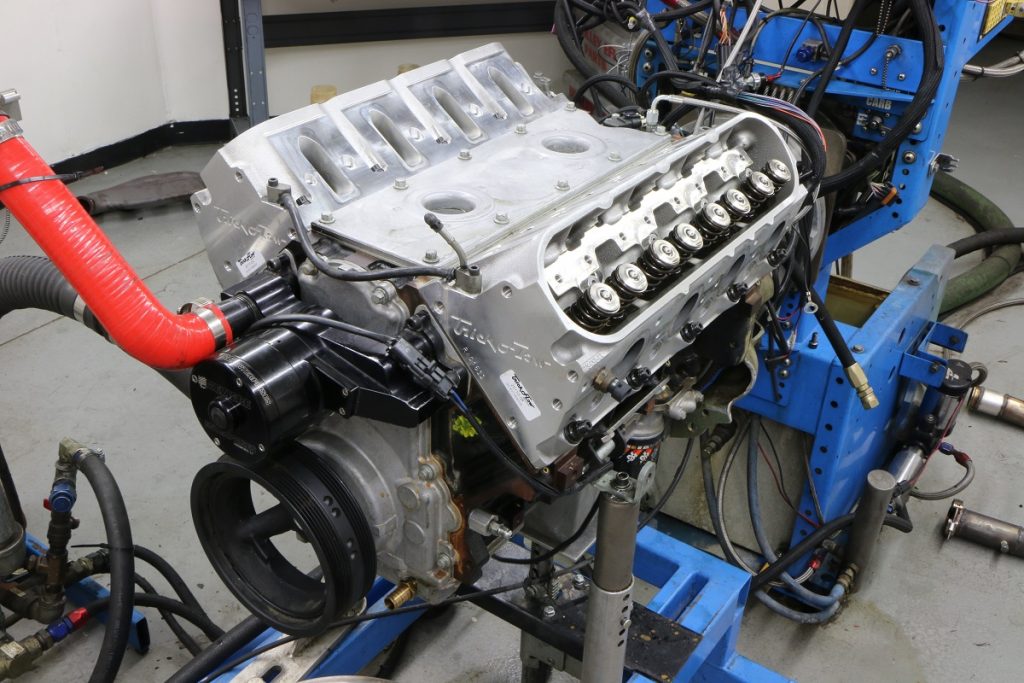 How to Get More Power From Your LM7

These engines started life in GM trucks, but there’s just as much of a chance today that you’ll spot them under the hood of a turbocharged drag car.

This article is focused on the power-adder pathway for upgrading the LM7, whether it will remain in a truck or be swapped into a car.

The LM7 is one of the most popular LS engines for several reasons:

Do they have a downside? Just one. At 216 pounds, the block is 100 lbs. heavier than the aluminum LS1 block.

Trucks are the everyday hotrods of the 21st century.

Many people start off adding a cold air intake and aftermarket exhaust.

The problem is that the engine starts to sound REALLY good and owners find themselves wanting to go faster.

Trucks often come with mechanical fans that sap horsepower. An electric fan kit will free up the power. All these can be done in the garage, but the tune won’t be optimized.

At this point, we recommend you talk to your chassis dyno tuner and decide on a computer programmer. Whether you’re towing on low-octane or springing for good fuel, a tuner can dial-in the ECM and take it to the next level.

Shift points can be raised which also makes it easier tune for a bigger cam and injectors later. Additionally, installing a colder thermostat will open up the tuning window.

Below are more upgrades that will improve LM7 engine performance.

Upgrading the LM7 Camshaft and Valvetrain

If you only do one thing to the engine, make it a cam swap.

An LS3 or LS9 cam makes good power, but not where you want it, if the engine remains in a truck.

What you need is a cam that delivers a gut-punch right where the converter hits. We recommend a dedicated truck cam.

If the engine is going in a lighter car with gear and converter, you can be more aggressive.

What’s the difference between a truck cam and car cam?

To maximize torque in the mid-range in a truck cam, manufacturers close the intake valve at about 40 degrees (@.050 in.) after bottom dead center and alter the intake valve opening to set the idle quality.

The bigger the engine, the smoother it will idle for any given cam, which is why you’ll see the 5.3L LM7 getting slightly smaller cams than the 6.0L engines.

What if you have a power adder?

Drop-in .500-in. lift cams are popular, but LS6 springs allow you to run .550-in. lift and extend the rpm range. Spring life isn’t a problem because trucks generally don’t spend a lot of time at high rpm.

The stock rockers are good up to 175 lbs. of seat pressure and 450 lbs. open. You will want to install a trunnion kit for added reliability.

There are a few other parts needed for a LM7 cam swap such as an LS2 timing chain, LS7 spec lifters, LS2 timing chain damper and adapter, as well as .080 in. wall pushrods.

In general, most LM7 owners will add boost or nitrous before they begin serious cylinder head work. Before we get into the power adders, there are a couple of things to address.

1. A 4-corner steam kit reduces hot spots that can cause the piston rings to butt and snap the piston’s ring lands.

2. Any power will put you well past the limitations of the stock injectors and fuel pump. We’ll address those in the next section.

Now for the fun stuff:

Plan on upgrading to larger fuel injectors to meet the fuel demands of increased power.

Custom tuning will be required to properly adjust the fuel and ignition timing. Truck manifolds had 1.9-in. injectors versus the longer Gen. III car injectors or the shorter Gen. IV injectors. The connectors are different as well, but adapters and spacers can be used to fit car injectors on an LM7.

When running boost, you can use a water-methanol system to supply extra fuel and lower-charge air temps.

The factory pump is good to about 430 whp. Many fuel system upgrade options are available. Drop-in fuel pump modules and external pumps are popular. Other options to maintain or increase pump pressure include electronic voltage controllers and hotwire kits.

The factory truck-style manifold has long runners for better low-end torque. Porting the intake is an option and a good value.

If you’re looking for more power and torque, the Trailblazer SS intake is a step up and a larger 90mm 4-bolt throttle body can be fitted.

Ask your tuner about going with a Speed Density tune. Doing so removes the MAF restriction and will give you a bit more power.

[Trying to find an LS or LS-based Vortec engine for a swap or build? Check out Part 1 and Part 2 of our LS Spotter’s Guide.]

As mentioned before, the pistons are a weak point and you probably know a guy that’s popped one. A set of forged pistons should be high on your priority list. They have stronger wristpins, thicker ring lands, and the added valve reliefs allow you to run big cams. If you’re going over 800 horsepower, a set of .200 wall tool-steel pins is a good idea.

There are exceptions, but Gen. III rods start getting dicey around 750 whp and the bolts don’t like much more than 7,000 rpm. The 2004½-07 modes were bushed for full-floating pins and were stronger. If you’re getting forged pistons, it’s best to also get forged connecting rods with 7/16-in. rod bolts.

The LM7 crank was cast but strong. They’ve been known to handle over 1,000 whp. The main reason for going with a stroker forged crank is for the added cubic inches. The extra cubes bring boost on quicker which means you can use bigger turbos.

Performance rotating assemblies are available in many combinations.

If you’re running boost and nitrous, most will just hone the blocks to 3.800-in. or up depending on piston and ring availability.

The blocks have been known to withstand 1,300 whp with proper machining, racing fuel, and an excellent tune.

Head and main studs are advised if you’re making more than 850 whp. Four head bolts per cylinder aren’t optimal, but you can O-ring the block if you’re aiming for 1000+ whp.

The factory main caps aren’t doweled. It’s better to reduce ignition timing and compensate with added boost to reduce the cylinder pressure spikes that lift heads and cause the main caps to dance.

NOTE: You can find engine specs and detailed engine upgrade advice for every LS and LS-based Vortec truck engine in one place: The Definitive Guide to LS Engine Specs and LS Engine Upgrades.