This is especially true in big-power, street-strip machines that combine lots of horsepower with a small torque converter and steep rear axle ratio. Engine rpm is up across the board, and the automatic transmission builds heat. This is also true for trucks that haul heavy loads or tow trailers battling tough conditions such as long grades, high altitudes, or desert heat. In any case, loads coupled with stop-and-go traffic increase the heat level in an automatic transmission.

How Hot is Too Hot?

The ideal operating temperature for automatic transmission fluid is somewhere between 175 and 225 degrees F. Here’s what can happen above this range:

How can that happen?

If the vehicle in question has a thermostat that opens at 195 degrees F, once warmed to operating temperature, the transmission cooler will have a tough time reducing the heat of the ATF below 195 degrees F. At the same time, if the transmission is overworked, it might raise the operating temperature of the ATF to 250 degrees F or more. This heat can be transferred to the engine coolant resulting in a potential boil over.

So what’s the answer?

You can add an external cooler. But before you rush out and buy the first cooler available, here’s an example to ponder:

Decades ago, we built an L88 powered 1969 Camaro complete with a turbo 400, a 12-bolt filled with 4.88:1 gears and an 8-inch torque converter. It was a street-driven car, but even with a big, four-core rad, the combination was always ready to melt the transmission fluid. In a conversation with Bob Fouts at Earl’s Performance, we garnered this critical kernel of information: It is virtually impossible to overcool an automatic transmission, especially one in a high performance application. Naturally, this might not apply to vehicles operating near the Arctic Circle, but in the rest of the world, it basically holds true.

Typically, there are two types of cooler styles available: “tube-and-fin” and the “stacked plate” cooler. A conventional tube-and-fin cooler is the most common type you’ll find. Generally speaking, this cooler configuration consists of fins that are placed over aluminum tubes, which are laid out in “S” patterns. The idea is to have air flow over the fins, which in turn creates a heat sink effect. This effect draws heat from the ATF. Tube-and-fin coolers are inexpensive and easy-to-build.

The other type of cooler that is available is the “stacked plate” design. This cooler is laid out in much the same manner as the radiator in your car. Rather than using a tube to carry the ATF inside the cooler, the fins actually form the passage for the fluid to pass through. This is almost identical to the process Detroit uses to build modern radiators. This type of cooler configuration is much more efficient than the tube-and-fin style. And if you search the Summit Racing website, you’ll see all sorts of good options, including top-of-the line versions from Earl’s Performance.

The stacked plate, or “modular” cooler, has been in use since prior to WWII. During the early 1930s, it was first developed for use with the Rolls Royce Merlin engine that powered the Spitfires and Hurricanes in the Battle of Britain. It was ideal because of its dense air fins and “turbulator plates” which provide maximum liquid side (internal) and airside (external) surface area. The collector or end tanks ensure minimum flow restriction, while the fully brazed construction results in the most efficient possible thermal transfer between liquid and air. This old Rolls Royce Merlin design is the most thermally efficient liquid-to-air heat exchanger format available.

Now, you’re probably saying: “there’s a big difference between the conditions seen in an aircraft and those experienced by my street driven car.” That’s true, but these old war birds were subsonic and piston powered. In today’s terms, those old aircraft were dead slow, and because of that, heat exchanger technology has more in common with today’s trucks and cars than you might think. Plus, a heat exchanger or cooler doesn’t know if it’s cooling engine oil, hydraulic fluid, or ATF. When this basic, modular design is utilized, and the oil flow and air speed of the vehicle is taken into consideration, then the optimum heat exchanger can be produced.

When it comes to heat exchanger construction, what’s best: copper and brass or aluminum? In most cases, the aluminum exchangers are nearly as thermally efficient as the copper and brass versions, but significantly lighter. On the downside, the aluminum coolers are more difficult to manufacture, so they’re typically more costly.

Another thing to consider is the paint. The common black paint that is preferred by most local radiator shops can act as thermal barrier instead of promoting the transfer of heat. A proper aluminum heat exchanger will either be anodized, or it will have a very thin coat of baked, heat exchanger paint (typically grey, silver, or black in color).

According to Earl’s Performance Products, the cooler must be mounted in a stream of moving air at ambient temperature to operate efficiently. It is not a good idea to mount the oil cooler behind the radiator where it will receive only heated air. It is not enough to lead air to the cooler; the heated air must have somewhere to go after it passes through the core. Air naturally flows from a region of relatively high pressure to a region of relatively low pressure, so you should mount your cooler in the airstream ahead of the vehicle radiator. That way, it will always be subject to high pressure at the face, and the engine fan will always provide a region of low pressure behind the cooler.

There are a number of ways to mount the cooler; however, Earl’s offers a slick system for their coolers. This aluminum bracket is designed to hold the cooler securely without damage from vibration. Included is a pair of brackets (with integral rubber cushions) and e-coated aircraft quality hardware with rubber insulators spacers.  Earl’s offers this bracket system for all of their Temp-A-Cure cooler models.

Port configuration is usually a matter of preference. The Earl’s coolers incorporate -10 AN O-ring boss ports. From here, you simply select the AN adapter that suits your needs. It’s no secret AN fittings are less prone to leakage and obviously much more secure than pipe thread examples. A -6 AN arrangement is most common for an automatic transmission. 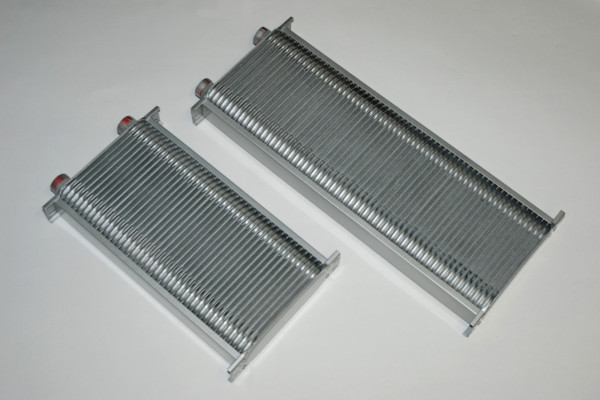 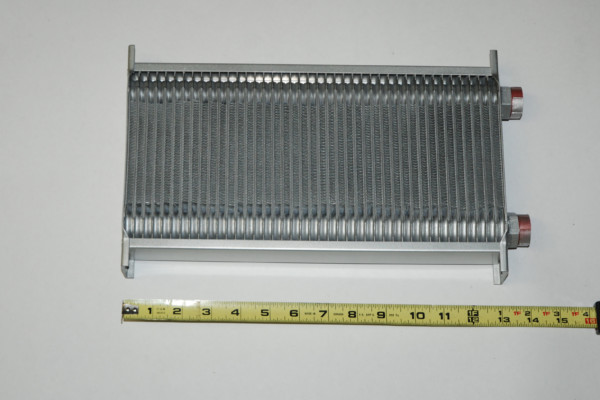 When mounting your cooler, keep in mind that heat exchanger (like engine radiators) do not work well if the liquid side is filled with air. Coolers should never be mounted so that both the inlet and outlet ports are on the bottom. The best method is to have the ports on the top. If this isn't possible, the next best scenario has the cooler mounted on the side so that the ports are arranged horizontally.

Earl’s coolers are manufactured with -10 AN female O-ring ports. From here, you simply use an AN adapter to go to your cooler hose size (which is typically -6AN – Earl’s #585106ERL shown here).

Up close, you can see the "modular" construction format. This type of cooler features dense air fins and "tubulator plates" that provide maximum liquid side (internal) and air-side (external) surface area. The collector or end tanks ensure minimum flow restriction, while the fully brazed construction results in the most efficient possible thermal transfer bath between liquid and air.

Although there are a number of ways to mount the cooler, one of the best that we've seen is the cushioned aluminum mount arrangement used by Earl's (Earl’s #1302ERL for the narrow coolers shown in the article). Manufactured from aluminum, this bracket is designed to hold the cooler securely without damage from vibration. Included is a pair of brackets (with integral rubber cushions) and e-coated aircraft quality hardware with rubber insulators.

The backside of the aluminum mounts (extrusions) is permanently fitted with rubber cushions. These cushions protect the heat exchanger from unwanted vibrations. Both the top and bottom mount brackets include this cushion arrangement.

This is how the mounting arrangement looks assembled on the cooler. It’s stout, secure and light.

For high performance street cars or trucks that are subjected to heavy loads or towing, bigger is always better. As we’ve already mentioned, it’s impossible to overcool an automatic transmission.

The nature of the Earl’s Temp-A-Cure cooler (shown in the slideshow) allows it to be manufactured in countless different sizes. In fact, Earl’s offers a wide array of coolers to suit almost any application. The narrow 8¼-inch wide coolers are available in heights ranging from 2 to 18½ inches. Along with the narrow coolers, you can purchase wide body coolers. The “extra wide” coolers from Earl’s have a width of 15¼ inches and heights range from 2 to 18½-inches. Finally, Earl’s manufactures curved coolers that have a width of 11.562-inches and a height from 3.05 inches up to 4.919 inches. Basically, any cooler with a face height up to 18½ inches can be created.

In the end, money that’s spent on a proper cooler is like money in the bank. Not only will your transmission live longer, it will also be more efficient.