Lateral control is how the rear axle housing is kept in a side-to-side alignment with the chassis as the rear suspension moves through its travel.

And it’s more important than you think.

Lateral control is essential when installing a traction device on any vehicle with a live rear axle, with the exception of a car with conventional leaf springs. Case-in-point is a very common four-link, coil-over spring suspension package. Here, there is absolutely nothing to hold the rear axle housing from moving from side to side. Without some form of lateral control, the housing could shift itself right out of the car.

To truly understand the importance of lateral control, you must first grasp the concept of chassis roll center. On a drag car, the chassis rolls at about the crankshaft centerline because all of the components that create the twisting forces spin on this axis (see illustration below).

This torque-induced roll is very common on any car, but with the big power most drag cars have, it’s very noticeable. Jerry Bickel tells us that designers of road race and stock cars do not ignore torque induced roll, but they are equally concerned with chassis roll that is induced by lateral acceleration.

“When a car makes a turn, a sideways force called lateral acceleration is applied to the chassis through the tires,” Bickel said. “Upper and lower control arm angles, rear centering link location, stabilizer bar stiffness, and center of gravity coordinates all affect how the chassis rolls in a turn.

“The confusion [for drag racing applications] begins when you apply lateral acceleration roll analysis to drag cars that only accelerate in a straight line. It is possible to conclude that the [rear axle] centering link location in a drag car affects chassis roll. It does not.

“On road race and stock cars, the rear centering link establishes the rear roll center height when cornering. The lower it is located, the farther it is from the center of gravity. This causes the chassis to roll more while making a turn. If you raise the centering link, the opposite happens and the chassis rolls less.

“Fortunately, we don’t have to concern ourselves with roll due to lateral acceleration. In a drag race, if you find yourself sliding sideways you’re in a lot of trouble anyway. Other than forces created by nominal sway movement of the body, there is no lateral force acting through the tires and centering link to create chassis roll.  All chassis roll in a drag car is torque induced and originates along the driveline.

“A couple of years ago, I moved the rear wishbone bar (centering link) from the bottom to the top of the differential. This has the stock car guys scratching their heads, but I did it for two reasons (see illustration below). It makes it a lot easier to change a third member and it’s equally effective on a drag car no matter where you put it.”

So what are your options for controlling this motion?

Let’s look at your choices.

Common on many production GM cars, along with a number of Ford products (Fox bodies as well as others) with coil spring live axles, this setup holds the rear-end in place by way of angled trailing arms. Typically, two of the four trailing arms attach to the center of the rear axle housing and skew outward. This system is light in weight, yet very strong when properly designed (the mounting points are typically loaded in shear rather than in bending). It does not require any form of lateral locator.

You can get a more in-depth look at this setup in our earlier post on triangulated four-links.

A Panhard bar is a link between the axle housing and the frame. Panhard bars are simple, effective, and reasonably lightweight (although the mounting brackets are usually large and heavy). In order to keep the arc produced by the bar as small as possible, the Panhard bar must be built as long as possible. The arc created during suspension travel makes for slight side-to-side movement of the axle housing (you’ll typically see movement of between 1/16-inch to 1/8-inch).

If you have a car that has large amounts of wheel travel and you run a Panhard bar, then increase the length of the Panhard bar. A long Panhard bar must be built in such a way that it clears the differential. This can sometimes create bracket and mounting problems since the brackets have to be beefy in order to handle the side-to-side loads.

The most important factor when installing a Panhard bar is to ensure the bar is parallel to the rear-end housing at ride height. For a closer look at a really good Panhard bar setup, climb under any 1982 or newer Firebird or Camaro. You’ll find the size and heft of the associated bracketry is considerable.

A Watt’s linkage arrangement eliminates the small side-to-side movement found in a Panhard bar.  The downside is a Watt’s link is often difficult to package at the appropriate height for a drag race chassis.  It’s also difficult to mount on the nose of the housing, although it is possible.

A Watt’s link must make use of some sort of bell crank system in order to work. If the Watt’s link is mounted behind the axle, then the brackets must be extremely stout. This is because the loads present can be very high — as much as 10,000 pounds, according to some experts. The need for some hefty components, along with complexity of a Watt’s Linkage setup, has made this design rare today.

Compared to a Watt’s Linkage, a diagonal bar is an extremely simple component that connects between the respective lower links of the suspension. By connecting the bars diagonally (and by using rod ends on either side of the diagonal bar), the housing cannot move from side to side, but it’s free to move up and down. In some applications with considerable travel, there will be some side-to-side deflection. With a diagonal bar installed in the car, it means that at least one end must be removed in order to service the third member.

It’s also important to note that you should not use diagonal links in any application that sees cornering forces. As you go around a corner with a car using a diagonal link, the loads placed upon the front of the bar are incredible. Diagonal links will sometimes bend when used in a street car application.  For that reason, a Panhard bar is the best option for most street cars.

A wishbone bar typically connects to a pair of brackets on the chassis and one on the rear-end housing.  Rod ends allow the wishbone bar to pivot as the rear end housing moves up and down during suspension travel. The single rear rod telescopes as required in order to prevent binding, but it cannot move laterally.

Wishbones are really the best choice for applications where the frame is narrow; however, you need to consider the clearance in the slip joint. The joint must be machined to keep clearances tight or you’ll definitely get some amount of side-to-side movement.

A negative with wishbone bars is poor third member access when conventionally mounted under the housing. Here, the wishbone is sometimes more difficult to remove than something like a diagonal bar.  In addition, a bottom-mounted wishbone is susceptible to damage on the telescope rod from track debris. That’s why Bickel prefers to mount the wishbone above the third member. 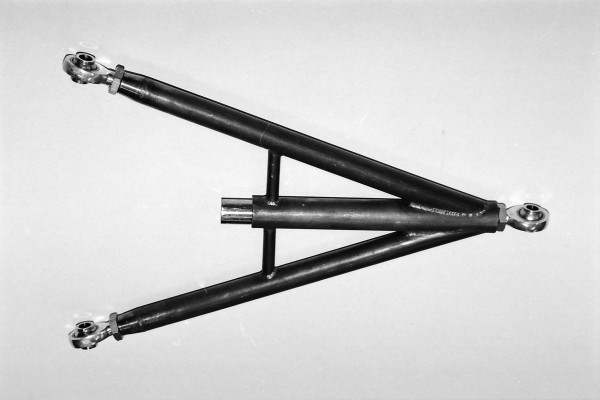 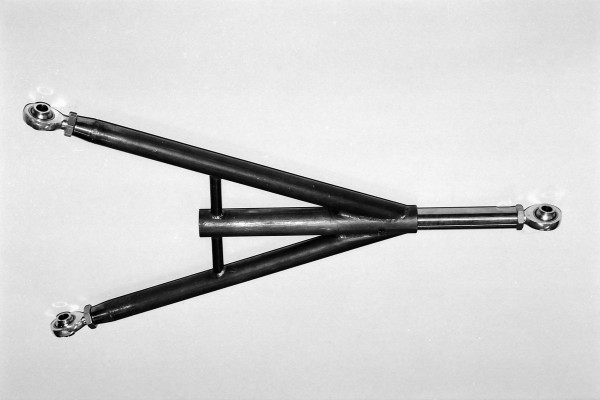 Take a look at this photo of a wishbone track locator and compare it to the next photo. The difference between the two is how the wishbone telescopes. As the suspension in the car "travels" up and down, the center shaft moves in and out.

Notice how the center shaft telescopes.

The entire shaft (which fits inside the receiver) is precision machined. The reason is the fit must be as close as possible. If it isn’t, then and the wishbone is loose, then the car will eventually experience some side-to-side axle housing movement. That can (obviously) translate into handling issues (or more).

Notice the flats machined on the shaft? They’re put in place so that you can tighten the rod end jam nut. Obviously, you don’t want to grab the end of the shaft with a vice grip in order to install a rod end.

How strong must a wishbone track locator be built? Check out this out. This is the end of the shaft hidden within the wishbone receiver.

The receiver must also be double strong. According to several sources loads on a track-locating device can sometimes exceed 5 tons!

A high misalignment bearing such as this is regularly used in a wishbone. This allows for relatively large angles of misalignment.

This is an adjustable “J” style Panhard bar from Allstar Performance (sold by Summit Racing). It’s a beefy piece complete with honking ¾-inch rod ends. Don’t underestimate the loads something like this sees.

Summit Racing sells a full line of BMR track locators. This is a replacement fully adjustable setup for a 3rd or 4th generation Camaro/Firebird.

When it comes to lateral control devices in a drag race car, the best choice depends on the intended use of the car, frame rail width, and to some degree, the amount of power you’re producing.

Pick the right parts for your application.