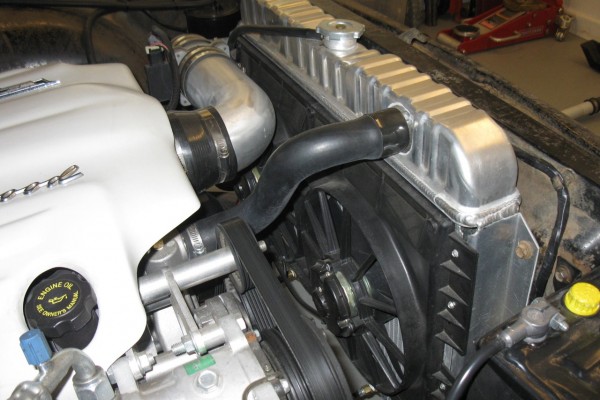 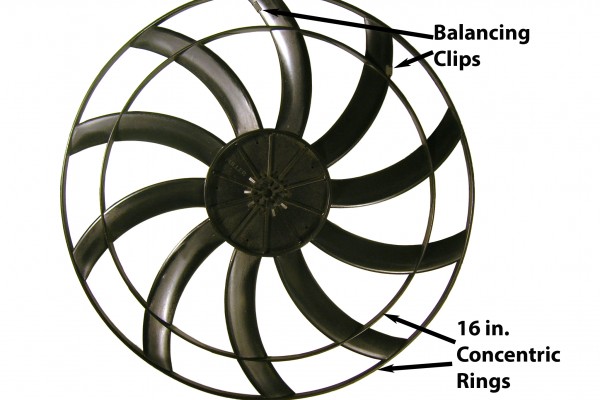 This 1960 Chevy station wagon has an LS engine swap—and a Maradyne dual electric fan to keep things nice and cool. “Our fans can perform and survive the punishment of TORC Off-Road racing and the Nationwide and Cup series, proving that they can handle the toughest conditions,” said CJ Clayton, national sales manager for Maradyne.

Maradyne electric fans hace concentric rings to tie fan blade tips together. 16 inch fans like this one have one outer and one inner ring to add stiffness to the blades and prevent them from flexing rearward into the shroud at high RPM. Smaller 12 to 14 inch fans have one outer ring preventing blade flex and distortion. The rings also reduce noise by preventing harmonic vibrations that can occur when individual blades rotate at high speeds.

Balanced blades prevent additional stress and wear on the motor, which can shorten its lifespan. Maradyne uses snap-on clips to balance the blades. They work on the same principle as wheel weights when balancing a wheel and tire assembly.

Maradyne electric fans have motors that are sealed to withstand dust and hunidity. The motors that range from 130 to 225 watts; motor power determines the amount of cubic feet per minute (cfm) of air a fan delivers.

The heat generated from stop-and-go-driving, racing, and towing can kill engines. A well-designed electric cooling fan is critical to prevent engine overheating—a good fan will provide the airflow needed to dissipate excess engine heat with the least impact on horsepower and fuel economy.

Without airflow, a radiator is not much more than a holding tank for hot coolant. Optimizing the air movement across the fins of the radiator is essential to prevent overheating—a task that electric fans can often handle better than engine driven fans. The key advantage of an electric fan is increased engine cooling at idle when it is most needed. In addition, replacing an engine-driven fan can increase horsepower and improve fuel economy by eliminating the drag of the engine-driven fan.

We contacted the engineers at Maradyne to learn more about what makes good electric fan design–and what you should look for when choosing a fan. Maradyne electric fans are spec equipment for several NASCAR Nationwide and Cup Series teams—a demanding application where cooling is critical to winning. Maradyne uses that same racing technology to build electric fans for daily drivers, street rods, muscle cars and off-road vehicles.

According to Maradyne, factors such as blade width, blade pitch angle, number of blades, and blade velocity impact a fan’s overall performance. Taking these factors into account, Maradyne engineers calculate the optimal angle of airflow through its fan at three points—the hub, the middle, and outer blade tips.

The next step is to make the fan design fully functional by optimizing fan blade pitch at the static pressure and rpm conditions that replicate most automotive applications. Essential aspects of high performance fan design include:

Here are some factors Maradyne considers important when choosing a electric fan:

Check out this Maradyne video that goes into more detail on choosing the right fan.

12 responses to “Electric Fan 4-1-1: Everything You Need to Know About Electric Fans”