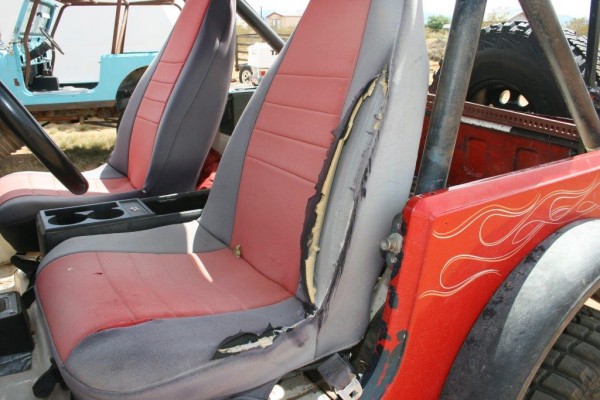 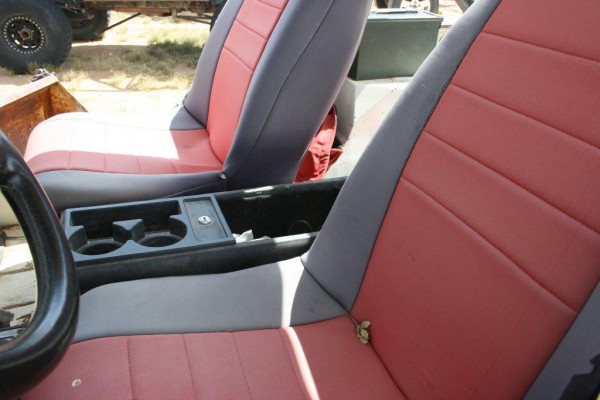 As you can see, our seat covers are falling apart from twenty years’ exposure to the Arizona sun. The seats are in much better shape underneath, but are still very worn and lack cushioning.

The old console had lost its lid and was becoming weaker with each trip into the outback. On the freeway, we were constantly worried about the console’s contents being blown out of the Jeep.

We had to do some minor modification to the Summit Racing Sport Seat brackets to get them to fit the Jeep’s seat pedestals. We made two straps from flat stock to widen the seat mount. A strap was carefully secured to each side of each seat mount, then welded in. The straps are drilled to match the factory seat pedestal mounting points.

The Racequip Latch and Link harnesses feature premium nylon webbing and drop forged steel hardware. The harnesses have a pivoting hammer or “duckbill” that locks all belts into place by snapping down into a detent.

You can use the Jeep’s OEM mounting positions and bolts to install the Racequip harnesses. This is the interior location on the transmission hump. The bolt is secured in a captured nut beneath the floorboard.

The other harness mount position is just behind the door. The Jeep’s OEM captured nuts and bolts meet the required D.O.T. safety specifications.

We slid the shoulder harness through the seatback to determine how high the roll bar mount had to be.

We marked both sides of the factory roll bar to locate the harness mount bar location. We made the mount bar from 2 x 4-inch steel tubing. After removing any paint and surface rust, we welded in the mount.

We had to make a front console mounting strap that matched the curve of the transmission hump. Normally the console would mount to the higher step on the hump but my shifter is in the way. We used the rear mount that came with the Rampage console to secure it to the floor.

Attractive, safer, and more comfortable, the Summit Racing seats and Racequip safety harnesses are shown off by a member of our off-road club.

Just like suspension components and tires, a Jeep’s interior will begin to wear eventually–especially after years of off-roading on rugged trails. Take this 1982 Jeep CJ-7, for example. The Bestop seats had been in the Jeep for more than twenty years—a good long run—but the Southwestern trails had mashed the padding down and worn the covers thin.

The Jeep’s seats ended up hard and unforgiving when the Jeep hit a rock or rut too hard, and several small cuts and scratches in the original covering material were becoming too big to ignore. The older seat belts and center console had also seen better days. The console lost its lid a few years ago when the wood frame became too weak to hold it. The seat belts’ couplers were so worn they were quite difficult to release and we were worried they could stop locking at any time.

Time to place a call to Summit Racing for a CJ interior rehab.

We chose Summit Racing’s Sport Seats. The deep racing-style seats have rolled up sides that cushion and cradle the occupant on both sides, from the knees to the shoulders. The seat backs have access openings for shoulder harnesses. The simulated leather seat covers are soft and the padding is very comfortable. These seats make us feel much safer on the trails and during mud bog and tough truck racing. We also got the matching seat brackets.

The Racequip four-point harnesses have three-inch wide lap belts and two inch shoulder straps. They keep us in our seats no matter how rough things get, and the added width is much more comfortable during long hours on the trail.

We fully expect these seats, safety harnesses, and center console to keep us safe and comfortable for at least another two decades!