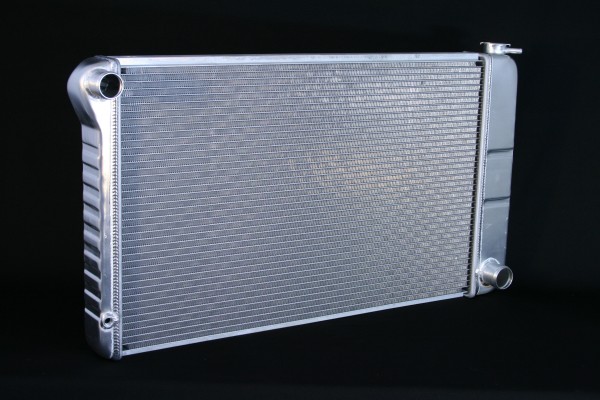 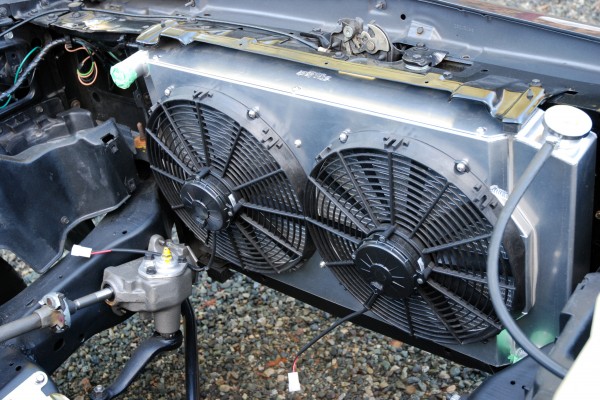 Once the province of racing, aluminum radiators have been standard equipment on new vehicles since the 1980s and are available for high performance street machines, classic muscle cars, and light trucks. This radiator from DeWitts Radiator is a drop-in replacement for 1968-72 Chevelles with a big block. DeWitts radiators feature two-row cores made without epoxy, which can turn brittle and fall out, resulting in leaks. The press-formed end tanks are hand TIG-welded to the cores to eliminate the chance of leaks at the joints. Most applications are available with a built-in transmission cooler for cars with automatic transmissions.

This is a high-capacity aluminum radiator made for a Buick Regal with a 572 cubic inch big block Chevy. It has dual electric puller fans and is well sealed with a complete shroud. The shroud forces the air to pass through the radiator core, improving cooling efficiency.

Copper/brass radiators are still popular for restorations on classic vehicles and musclecars where originality is crucial and a black-painted aluminum radiator won’t do. While copper/brass radiators are heavier than aluminum, a properly-sized one will do a good job of keeping a stock or mildly-built engine cool. This Spectra Premium radiator is an OE replacement for 1963-66 Chevy trucks with six-cylinder and V8 engines. It also fits 1961-66 full size Pontiacs.

This is a well-built copper/brass reproduction radiator for a vintage ‘60s Camaro with a 427. While it has serious cooling capacity, the aluminum radiator in Photo 2 not only outcools it, but weighs less too. Still, copper/brass is the way to go if you’re restoring a classic vehicle or musclecar back to stock.

Straight or “soft bend” inlets and outlets rather than sharp bends can make quite a difference in cooling. That’s why high quality radiators use formed bends like this. The same thing applies to hoses. Use the correct formed hoses rather than generic fits-all hose whenever possible.

It’s no big secret that big horsepower means increased heat. But high performance engines, like other internal combustion powerplants, aren’t really all that efficient. Roughly one-half of the total heat energy produced by an engine is not put to work, but simply transferred back to the cooling system. If your cooling system—especially your radiator—is not up to snuff, that heat won’t be properly dissipated to the atmosphere. That can leave you stuck on the side of the road with coolant burbling out of your radiator.

Here’s what happens to the coolant inside your radiator. As the coolant approaches its boiling point (for example, the boiling point of plain water at sea level is 212 degrees F), internal pressure begins to build. Since the cooling system is closed, the pressure continues to build without any opportunity to escape. As that pressure increases, so does the coolant’s boiling point.

If coolant temperature continues to rise and pressure increases past the radiator cap’s pressure rating (measured in pounds), the radiator will boil over and makes a mess. If the radiator boils over when you’re on the throttle and coolant gets under the tires, you know what happens next. The radiator is basically a huge tank that allows large amounts of hot coolant from the engine to come in contact with an equally large amount of cool air. The coolant is first forced into the radiator side tank (or upper tank if it’s an old fashioned non-crossflow system). The coolant makes its way through rows of very small copper or aluminum tubes in the radiator’s core, where it is cooled by air flowing over and beside the tubes. The heat is transferred from the tubes to fins that are in contact with the tubes. As air passes through the fins, the heat is carried away. The coolant then goes into the radiator’s second side tank and is returned to the engine.

The actual number of fins on the radiator is very important. As a rule of thumb, a conventional radiator will normally have 8-14 fins per inch. When more fins are added, the radiator can dissipate more heat to the surrounding air. The downside of more fins is the radiator is more easily plugged with bugs, dirt, and other gunk that reduce its efficiency.

Most modern radiators are made from aluminum. An aluminum radiator is more efficient and weighs up to one-third less than a comparable copper/brass radiator of the same dimensions. The main reason for aluminum’s greater efficiency is the ability to use wider tubes in the core. Larger tubes mean more tube-to-fin contact surface area (up to 20 percent over copper/brass), which provides better heat dissipation. That’s why an aluminum radiator with two rows of tubes can out-cool a copper/brass equivalent with four rows of tubes by as much as 30 degrees F.

That’s not to say there isn’t a place for a copper/brass radiator. They’re a must if you are restoring a classic vehicle or a 1960s-70s muscle car to stock or near-stock specifications. But if you’re turning up the horsepower wick, aluminum is where it’s at. And with the selection available today, there’s an aluminum radiator for just about every vehicle.

For even more information on selecting a radiator, be sure to read our How to Choose a Radiator post.

5 responses to “Radiators 101: A Basic Guide to Aftermarket Radiators”