Team Summit drivers have spent part of each of the last two Novembers visiting with American troops stationed at Ramstein Air Force Base in Germany. In this post, which originally ran on November 24, 2010, two-time Pro Stock champion Jason Line takes you inside the Auto Hobby Shop, where the base’s car guys hangout and wrench on vehicles. 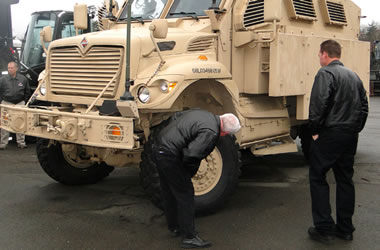 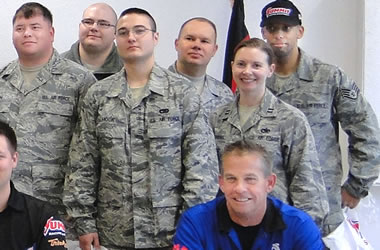 Jason Line takes time out with some fellow gearheads.

Warren Johnson gets some camera time with troops from the Auto Shop.

Ramstein Air Force Base, Germany—Our final day in Germany seemed to be centered around things that would naturally appeal to this group, as the groups we visited handled the mechanical aspect of the base’s operations. For example, our first stop was the 86th Services Squadron Auto Skills Customer Service Center, which is also known as the Auto Hobby Shop. Upon our arrival, we were introduced to the manager, Eddie Forest, a Mississippi native with over 30 years’ experience in the field. Eddie was kind enough to give us a tour of the shop, an immaculate facility that is divided into two wings.

The first side, which is where we entered, offers people on the base an area where they can rent a bay to work on their cars inside and on a lift, whether they are interested in performing simple maintenance or making a few modifications. Not only do they offer the convenience of an internal parts department, but the staff can also provide guidance for those who request it. In this manner, base personnel can avoid having to deal with the language and currency barrier presented when dealing with dealers and/or repair shops off the property.

The current hot ticket at the Hobby Shop is switching over to snow tires for the upcoming winter season, with the next available appointment two weeks away. However, should the customer not be interested in being their own mechanic, the shop also offers a full-service repair facility on the other side. Naturally, once we finished our tour, we signed some autographs for the staff, as well as the customers who came in to see us.

From there we moved on to the 86th Vehicle Readiness Squadron, a sprawling repair facility responsible for every official vehicle used on the base, as we would soon see. Upon meeting our contact Sgt. Sean Tremblay, we moved into a room where we were greeted by a large group of soldiers attached to this facility. In a reversal of our pattern from the last three days, we signed autographs and chatted with the troops for about an hour before being shown some of the highlights of the operation.

Escorted by the Operations Officer, Captain Stevens and 1st Sergeant Owen, we walked over to the auto repair shop, which looks and acts much like your local dealership or auto repair facility. Once again, we were all impressed by just how immaculate and organized it was, almost as if there was never any work done (despite the fact that the mechanics were hard at work when we arrived).

Our next stop was a real treat, as we were taken into the parking lot and shown a Mine Resistant Ambush Protection vehicle, more commonly known as the MRAP. Costing a cool $1.5 million, this behemoth is designed to protect our troops from IEDs, which are the leading cause of casualties in the Middle East. It is truly an imposing vehicle, weighing in at just over 53,000 pounds due to the extensive armor it carries. Just opening the 900-pound doors takes an incredible effort.

Although we were instructed not to take pictures of the interior or the undersides, they graciously allowed us to climb in and take a look, which was amazing. It seems indestructible, but, most importantly our guide Sgt. Gonzalez, relayed how he had been able to witness its performance in person down range, and assured us it was the real deal. As far as I am concerned, if it keeps our troops safe, it’s worth every penny.

From there, we walked across the parking lot to the Special Purpose Vehicle Shop, which handles everything from jetways used at the airport to the de-icers which keep the massive C-17 and C-5 clear during inclement weather. Sgt. Hesler took us through their biggest de-icer, which is used primarily on the C-5. It carries an on-board 3.4 million BTU heating system, which heats the ethylene glycol mixture they use. It is then pumped through an intricate plumbing system to the boom-mounted cab, which is capable of rising over 76 feet in the air. Once in position, it is able to deliver the de-icing fluid at a staggering speed of over 700 miles per hour. Naturally, these units require extensive maintenance, which is where Sgt. Hesler and his unit come in.

After a quick lunch, we headed back over to the BX/PX at the Kaiserslautern Military Community Center for our second autograph session, where we handed out goody bags and signed hero cards for the families who were out shopping. While doing so, I was approached by this young lady named Molly who mentioned that she was from Minnesota and that she believed we were cousins. We talked for some time and I believe she might be right.

Of course, I wanted to make sure to have our picture taken together so I could send it to my family, and noticed her last name was now, of all things, Anderson! It just shows you what a small world we live in. Here I am signing autographs in a mall at an American air base in Germany and I run into a relative. Still, it was pleasant surprise, and I’m glad I was able to spend a little time with her.

Our last stop on this tour was over at the Ramstein PAX Terminal, which is where the troops fly in and out of Ramstein. Unfortunately, we just missed the two biggest hops of the day, so after spending time with the troops still waiting for their flight to come in, we headed back to our hotel, where after changing, we spent a little time in the mall getting souvenirs for everyone back home.

Finally, we enjoyed our last night together by having another tremendous dinner at the Hofbrau Haus in Kaiserslautern, where Wayne and Dieter presented us with certificates of appreciation while our driver Wayne’s wife delivered a delicious and gorgeous Summit cake for dessert—a nice touch.