Ask Away! with Jeff Smith: Camshaft and Cylinder Head Recommendations for a Ford Windsor 302 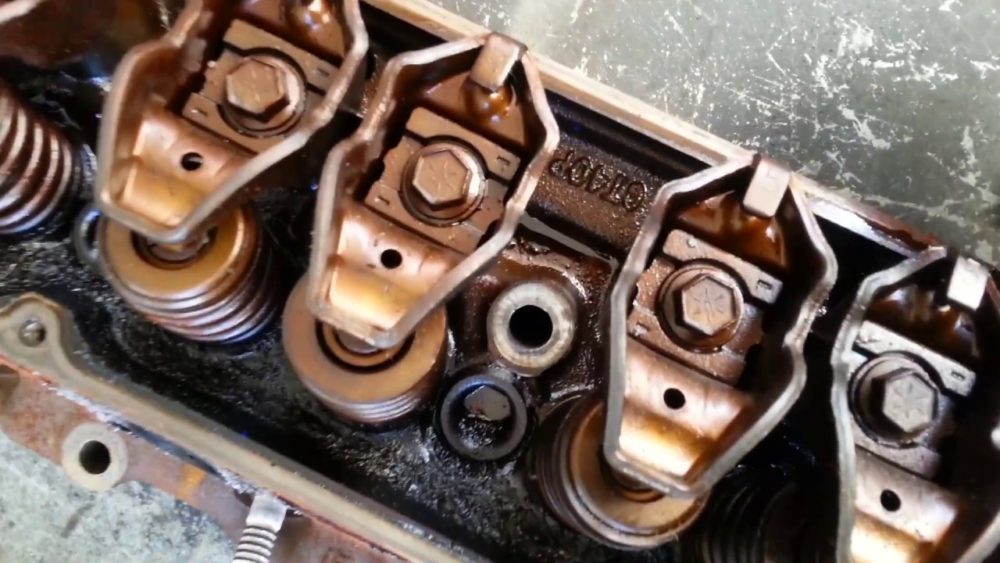 These are Ford iron GT-40P heads. You can find them on later model Mercury Mountaineers and several other Ford SUV applications. These are a great head but do need some machining mods to make they really work well. (Image/Harrison Creamery)

I have a 302 Windsor V8 EFI engine that I converted to a 600 cfm carburetor with a Street Warrior intake manifold. It runs smooth but seems lazy. I’m now thinking of adding a cam to match the carb. Can I run the new cam with the same roller hydraulic lifters or do I have to change the lifters too? — K.S.

Jeff Smith: It would have been better to know a little bit more about your combination, but the short answer is yes—with a hydraulic roller camshaft, assuming the lifters are in good shape and the roller wheels show no unusual wear, they can be re-used on a new cam with no danger of adverse effects. The best thing to do would be to use a specific break-in oil for the first 200 to 300 miles of use to reduce the change of a potential problem with undue wear.

As usual, there is much more to this story. You didn’t mention what camshaft you would be choosing or exactly which 5.0L Ford Windsor engine you are working with. We’ll assume it is a 5.0L with stock heads. We’ll also assume that this engine is running stock exhaust manifolds. Our recommendation would be, rather than change the camshaft, you might want to look into adding a set of long-tube headers and a dual exhaust if the engine is not already so equipped.

There are a couple of reasons for this suggestion. First, adding headers will improve power on the existing combination. Early Windsors tend to have fairly restrictive exhaust manifolds, making the addition of a set of headers that much more efficient.

What you are trying to do is to increase the amount of airflow through the engine in order to make more power. The headers will improve this airflow throughout the entire rpm range—adding more torque and horsepower. Adding the headers may also require a slight increase in secondary (and possibly primary) jetting to ensure the proper air-fuel ratio, but that’s also an easy tuning change.

Once the headers are in place, then you can consider if you still want more power. Keep in mind that swapping camshafts is a fairly extensive effort. The entire front accessory drive and timing chain cover must be removed, along with the distributor and intake manifold.

You didn’t mention the car this engine is in, but let’s assume there is enough room to remove the radiator and any other coolers and perhaps some or all of the front grille and/or brackets before the cam has sufficient room to exit the front of the engine. If there isn’t room without disassembling half the front clip on the car, then it might be easier to remove the engine and do the conversion that way.

You didn’t mention which cam you had in mind. There are literally a dozen or so camshaft companies that offer a mild hydraulic roller cam for a 5.0L Ford. We’ll offer one as an example.

Again, assuming this is a nearly stock 5.0L with stock heads, the Weiand Street Warrior dual plane intake and 600 cfm carburetor, it’s important to not become overly aggressive and choose a big camshaft. This is a common mistake with first-time cam buyers who don’t necessarily appreciate that the cam is just one component of the overall engine package.

Since the engine is nearly stock, we would want to choose a relatively mild camshaft with somewhat more lift and duration than stock, but again not going too aggressive. We did a quick search for hydraulic roller cams and landed on a COMP camshaft that looked promising.

Many years ago, a friend bought a used 2001 Mercury Mountaineer 5.0L that was equipped with a set of really decent GT40P style iron heads.

These are among the best of the iron Ford Windsor heads as they tend to flow much better than earlier castings. If you wanted to make your engine feel strong, these would be a decent investment, but they will require some modifications.

Their weak point is that the rotator used on the exhaust valve is very thick. This needs to be removed and different exhaust valves, retainers, and valve springs added to turn this into a decent street head. This will cost additional money but is still worth it, in our opinion. This is just a quick overview of the changes that need to be done. If this is beyond your technical ability, you could ask a local machine shop to perform the modifications. Most of them are aware of what changes need to be completed. Or, you could invest in a new set of heads that would also do the same job but you can expect to spend quite a bit more money.

Assuming this will be a daily driver engine, a short duration camshaft, especially when combined with a four-barrel dual plane intake manifold and headers, will deliver extremely snappy throttle response and the whole combination will increase the torque and peak horsepower by somewhere in the neighborhood of 20 to perhaps 35 horsepower.

A COMP hydraulic roller cam we found works well with this combination. The specs are a conservative 212/218 degrees of duration at 0.050-inch tappet lift but offer a really nice 0.512-inch valve lift for both the intake and exhaust. The combination of this cam with your intake and headers will produce a very nice street engine.

When compared to the new generation of performance engines on the market today like the 5.0L DOHC Coyote engine, your engine will not come close. This is not a criticism but instead consider it to be more of a heads-up. The older pushrod engines just don’t offer the same kind of power potential for their displacement and it all has to do with cylinder head flow.

For 2018, the Coyote makes 460 hp. The reason this new generation of Ford engines make a ton more power is they also enjoy fantastic cylinder heads and four valves per cylinder. Assuming the above configuration—a pushrod 5.0L will potentially make between 250 and 260 hp.

But don’t think that adding a bigger camshaft will make more power. In order to make Coyote-type power you will need some expensive, high-flow cylinder heads with a short block that can withstand spinning in excess of 6,500 rpm. Actually, making around 240 to 250 hp with a near-stock Windsor 302 will feel pretty good.

14 responses to “Ask Away! with Jeff Smith: Camshaft and Cylinder Head Recommendations for a Ford Windsor 302”