Ask Away! with Jeff Smith: Can Direct Injection and E85 Live Together in Harmony? 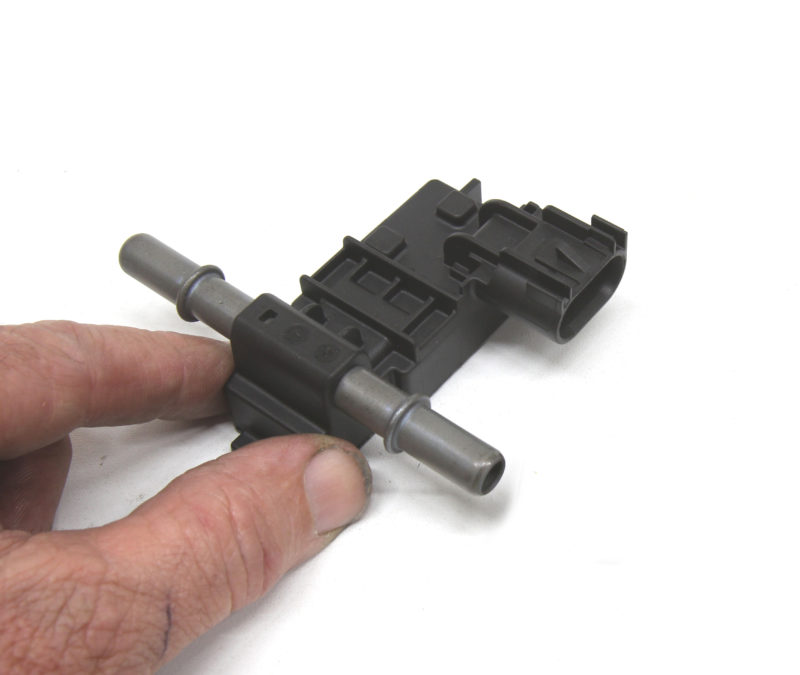 This is the GM flex fuel sensor that can plug into the fuel line. It measures the percentage of ethanol in the fuel and then, with the proper software in the factory ECU, adjusts the injector pulse width to compensate and maintain the proper air-to-fuel ratio. The fittings on this sensor are factory 3/8-inch quick disconnects. (Image/Jeff Smith)

I drive a 2014 Corvette Stingray LT1 7 speed manual with a cold air intake and dyno tune as the only performance mods thus far. In my quest to add more power, I see guys converting their fuel systems to burn E85 and netting somewhere around 25–30 wheel horsepower.

It is an excellent dollar per horse power upgrade. However, at what cost do they enjoy the extra power? Any idea if Stingray direct inject fuel systems and E85 can live together in harmony? For example, will I run into corrosion issues, or is that a misconception? I’m not afraid of working on my car and improving it, but I also keep it pristine and appreciate reliability. I also appreciate a professional’s advice such as yours. – J.D.

Jeff Smith: I think this is a great idea. The corrosion issues are exaggerated and created by the petroleum industry in an attempt to dissuade this country from demanding higher ethanol content in gasoline, because that means the petroleum companies sell less gasoline. From my research, it appears there are very few negatives for late-model cars to use some blend of ethanol and gasoline. The biggest real-world negative of using E-85 is a drop in fuel mileage.

I will admit that I’m a proponent of mixing ethanol with gasoline. I’ve interviewed people from the ethanol industry and much of the talk about corrosion is aimed mainly at older cars, where there are some minor issues that can surface. However, the ethanol industry’s research indicates that problems more frequently can be traced to the additives in gasoline called aromatics (such as benzene, xylene, toluene, and a few others). These are the real offenders.

I’ve performed an admittedly backyard test where I have soaked a small piece of untreated aluminum sheet and an old Holley carburetor zinc metering block in an E85 bath for a period that has now extended to 18 months. I’ve allowed that fuel to evaporate and then refilled the plastic bin with fresh E85 at least a dozen times. I allowed these metal components to be exposed to air for long periods of time before again immersing them in the E85. The only corrosion I’ve found was a couple of small spots of iron oxide rust on the aluminum plate that somehow found their way onto the aluminum. In 18 months, I have found zero corrosion issues on these sensitive components.

Regarding ethanol’s advantages, I’ve learned that blending ethanol with gasoline does not produce a linear scale of results. Lighter blend loads of E30 (30% ethanol and 70% gasoline), for example, can produce a fuel with an octane rating of around 95, especially when blended with premium 91-93 gasoline. An E50 mix can push the octane rating to around 98 for much less than it costs to purchase 100-octane unleaded race gasoline. As the percentage of ethanol increases above 50%, the octane gains are less pronounced–which is typical of the law of diminishing returns.

It’s also worth noting here that the new official government definition of E85 is any blend of ethanol with gasoline that can legally range from 51-83% (E51 to E83). This is intended to accommodate the blending changes that occur from winter to summer. This means the percentage of ethanol can now legally be anywhere from 51 to 83%! The only way to know is to test it. There are inexpensive testers you can buy that produce fairly accurate results.

The major advantage to blended E30 to E50 is this can be used with the engine’s existing injector size. Better yet, the increased octane allows the engine to take full advantage of the existing timing curve, both at part and wide-open throttle (WOT). In the summer, when inlet air temperatures are much higher, the detonation sensors pull timing back from the maximum, which limits power. A major advantage to ethanol is that it enjoys a much higher latent heat of vaporization compared to gasoline. This means it will pull heat out of the incoming air. Testing reports that I’ve seen indicate that even though you have a direct injection engine where the fuel is injected into the cylinder, there are still benefits to ethanol fuel that make more power.

I don’t have any personal experience with the LT1 engine on E85, but we did run one on the dyno at Westech as a test for Street Rodder magazine. Our test was performed with the accessory drive removed and replaced with an electric water pump and a set of JBA Camaro headers installed on an otherwise stock engine. With a minor Westech Performance tune, the engine made 518 hp at 5,800 rpms and 521 foot-pounds of torque at 4,600 rpms. The stock LT1 is rated (conservatively we think) at 460 hp, but that is using the more conservative OE horsepower correction factor.

Our testing also leaned the WOT fuel by roughly a half ratio, which is typical of most late model engine factory tuning. This is done to reduce the heat in the catalytic converter so it doesn’t get hot and begin to melt.

The point here is that this engine makes really good power to begin with and enjoys the highest static compression ratio (11.5:1) of any Chevrolet production engine ever. Engines with higher compression need higher octane fuel to ensure good power. This is what everyone seems to miss when evaluating ethanol as a fuel. Straight ethanol (E98) has a rated anti-knock index (R+M/2) somewhere around 115 octane. Blend this with a high quality premium gasoline and you have an excellent race gas for very little investment.

I would start by finding a shop that has some experience with blending ethanol for the LT1. I spoke with my friend Andy Wicks, who owns DynoTune USA, a performance center in Watertown, SD. He has a ton of experience with E85 and said that the last stock LT1 Corvette that he tested with E85 responded with a 15 hp improvement. He added that the injector size is such that there’s plenty of “head room” or injector capacity to allow the use of E85.

If you can find a shop that has the capability, Wicks said that it’s possible to purchase the GM flex fuel sensor and wire it into the existing factory ECU. By establishing the electronic pathways in the software, this essentially creates a flex fuel conversion for the Corvette. The key to this is that the sensor measures the percentage of ethanol in the fuel and then changes the air-fuel mixture ratio to compensate for the level of ethanol in the fuel. It might be worth contacting Wicks to find out more about how this can be done. Summit offers several GM flex fuel sensors that are easily located for different applications.

As we mentioned, the percentages of ethanol in pumps marked E85 can change rather dramatically, so having a sensor that will measure the exact blend of ethanol and gasoline is a great way to optimize your engine’s performance even as the blend ratio changes. Tuning will probably not be optimized in all conditions, but the advantages certainly are there.

3 responses to “Ask Away! with Jeff Smith: Can Direct Injection and E85 Live Together in Harmony?”