Ask Away! with Jeff Smith: Choosing a Flywheel for a Gen VI 454 Chevy Big Block 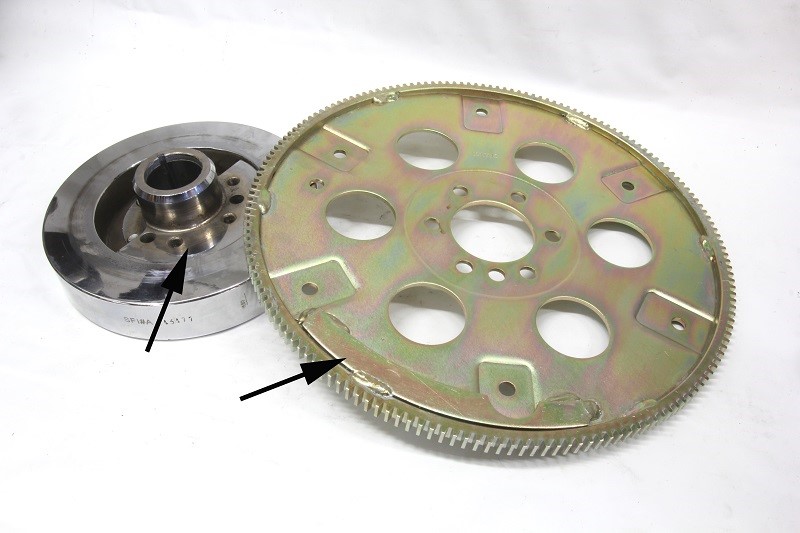 This photo illustrates the offset weight found on a flexplate and the harmonic balancer for an externally balanced big-block Chevy 454 as indicated by the arrows. On a flywheel, the offset weight is often a series of drilled holes around the outside of the flywheel instead of a fixed weight. (Image/Jeff Smith)

I purchased the economy version of the engine with a flexplate. I have a cast iron crank casting number 10114188 and I’d like to run a manual transmission now.

From all the research I have done, I cannot get to the right answer. I have found that there is a difference between the flywheels between cast and forged steel cranks, but I cannot find the part number for the flywheel that would mate to my cast crank. I hope you can clear this up. — R.O.

Jeff Smith: There appears to be a very slight difference between the forged steel cranks used in Chevrolet Performance’s Gen VI ZZ454 and 502HO engines and the cast crankshafts used in regular production replacement 454 Gen V and VI engines. The difference is 0.8 of an inch/ounce external weight. This represents less than 2 percent.

First, as followers of this tech column already know, we should dive into the basics.

In this case, we’ll limit this discussion to just the externally balanced big-block Chevy. When Chevrolet built the original 396 and 427 c.i.d. Rat motor, they designed the rotating assembly to be internally balanced. This means the harmonic balancer and flywheel/flexplate are zero balanced.

When the 454 came along, there was no room left inside the crankcase to fit larger counterweights on the crankshaft to accommodate this engine’s larger bore and longer stroke. To make all this work, Chevy engineers added the additional counterweight externally on the flywheel and harmonic balancer as eccentric weight. This created what is called an externally balanced engine. The production 400 c.i.d. small-block Chevy is also externally balanced engine.

The original spec for this external balance was called out as 33.0 ounce-inch. An ounce-inch is defined as the moment of force of one ounce acting at a distance of one inch from the centerline of movement. So this particular spec would be the equivalent of 30 ounces of eccentric weight placed one inch from the crank centerline.

This external weight called for a different flywheel or flexplate for the original 454 compared to the original 396 and 427 Chevy big-blocks.

To make things a bit more cumbersome, the crankshaft bolt pattern remained the same between these two applications so you really needed to be sure about the rotating assembly before bolting on a new flywheel or flexplate.

Then, to add further to the variables we must keep track of, Chevy redesigned the big-block as the Gen V in 1999 and later as the Gen VI. These versions eliminated the original two-piece crankshaft flange, replacing it with a one-piece rear main seal. This one-piece configuration made it impossible to include the small eccentric weight next to the crank flange. This increased the external balance offset from 33.0 to 42.5 ounce-inch. However, the crank flange bolt pattern remained the same so now we had yet a third different flywheel spec.

Then, when Chevrolet Performance came out with the 454 HO and 502 c.i.d. Gen VI engines, these engines used forged crankshafts that called out a yet different ounce-inch spec, changing from 42.5 to 41.7 ounce-inch. While this is a very small change, our friend Will Baty at Centerforce told us that not only is there a weight difference, but also the location of the weight shifted slightly. The combination of These factors makes it important that the proper flywheel is used.

Even small imbalances can be felt at almost any engine speed but it becomes a much more serious difference as rpm increases.

To put this in perspective, there are 28.3 grams in an ounce. One ounce of imbalance located one inch from the crank centerline will create an imbalance force equivalent to 31.9 pounds at 6,000 rpm. At 2,000 rpm, it would be 3.5 pounds of force. It’s possible that you could feel that imbalance even at 2,000 rpm.

This has probably been the long way around the answer, but it would appear from this information that you will need to find the proper flywheel for your engine. Essentially you will be looking at a choice of two basic flywheel materials. A stock flywheel that would accommodate your flywheel is normally offered as a nodular iron piece for normal street driving. This would be a 42.5 ounce-inch spec externally balanced offset weight.

The second option is a SFI-spec steel flywheel. Most of the high performance clutch manufacturers would offer one. As an example, Centerforce lists an externally balanced, 36-pound steel SFI-spec flywheel made from high quality steel and legal for use in NHRA drag racing and but may be a bit overkill for a mild street application. For a stock replacement flywhweel, we found a LUK version at Summit Racing that would work that is less expensive.

A new flywheel is best matched with a new pressure plate and clutch assembly. It’s also a good idea to break-in the new friction surfaces with easy driving for at least the first 200 to 300 miles and avoid towing until sufficient heat has been built into the clutch. While this might sound like a bunch of extra work and expense, the result will be a smooth operating clutch and flywheel assembly that will work well for a long time, long after you’ve forgotten the slight sting of the added expense.

9 responses to “Ask Away! with Jeff Smith: Choosing a Flywheel for a Gen VI 454 Chevy Big Block”

Video: How to Bleed a Hydraulic Throwout Bearing