Ask Away! with Jeff Smith: Achieving an Efficient Charging System in a ’70 Camaro 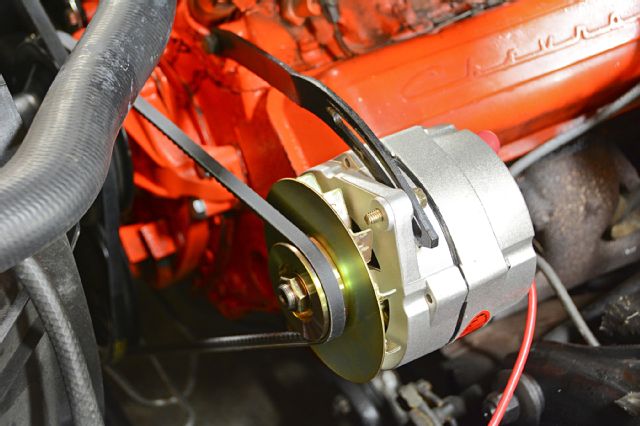 I am looking to change my stock 1970 Camaro alternator with an external regulator to a one-wire internal regulator with 150 amps to run my dual electric fans and other accessories. Any recommendations or tips on how to do this? Thanks. — D.S.

Jeff Smith: This is a great way to upgrade your Camaro for several reasons. The dual fans will probably keep your engine cooler over a wider range of operating conditions and yanking that mechanical fan will also offer a slight power improvement and perhaps even a small mileage gain.

As for the alternator, I don’t know all the electrical components on your car, but to size an alternator, it’s best to first make a list of all the electrical components on your car and then add them up to evaluate the maximum potential load on the charging system. We assembled a short list of the most common devices that might be on your car. We assumed an EFI system instead of a carburetor because EFI and an electric fuel pump will draw a significant amount of electrical power. We’ve included the list. Adding up just the minimum loads from all these components operating simultaneously, we came up with an amperage draw of 83 amps.

On the surface, that 150-amp alternator should be more than capable of handling the load. But let’s look a little closer at how alternators operate. That 150 amp rating is the alternator’s maximum output, but alternator output is a little like an internal combustion engine in that it takes some rpm in order to make maximum power. At idle speeds, an alternator will generally output roughly 1/3 less power than it will at maximum rpm.

All alternators are over-driven compared to actual engine crankshaft speed, but they still require some engine rpm in order to achieve maximum output. We’ve included a chart that lists the power output of a 140-amp Powermaster alternator at idle versus cruise versus peak alternator output. These are numbers supplied by Powermaster on a dyno sheet supplied with the alternator.

Also note the second column in the chart that lists output at operating temperature. All alternators (not just Powermaster) are rated at their maximum output at ambient temperature because they are more efficient there. But street cars run with under-hood  temperatures that can be 120 to 130 degrees F. Heat induces resistance into all electrical circuits and alternators are no exception. Powermaster says that this efficiency loss is no greater than 20 percent. If we use 15 percent as our efficiency factor, then that same 140 amp Powermaster alternator at idle is really only capable of slightly more than 87 amps at idle. As you can see from our simple load chart, that’s almost exactly the same as the amperage load you might experience on a wet night with the engine running, headlights and the defroster fan running.

All of this still makes your 150-amp alternator selection look good, but more of that power can be lost if you don’t pay attention to some simple installation details. The biggest mistake we see committed with many charging systems is that while the alternator is often more than capable of supplying the power, that the main charge wire leading from the alternator to the battery is undersized. We have yet a third chart that lists the proper charging wire size for varying output alternators combined with the length of the charging wire.

Let’s assume that your battery is located under the hood combined with a 150-amp alternator. From the chart this application sits right at the cross-over point between either a 6 AWG or a larger 4 AWG. Now that 4 AWG wire is massive, roughly 5/16-inch in diameter while a number 6 AWG is still a solid ¼-inch in diameter. These numbers are the outside diameters including the insulation. These are generally going to be much larger wires than you typically see, but this is what you need in order to maximize the amperage output while minimizing the voltage drop across the charging system.

There’s a very simple way to evaluate the charge wire efficiency by using a volt-amp meter. The procedure is to bring the vehicle up to operating temperature and turn on as many electrical devices as possible—especially all the big draw items like the electric fans. At idle, measure the voltage at the output terminal on the alternator. Let’s use the example that the alternator is capable of 14.0 volts.

Now take a voltage reading directly off the battery posts. Let’s say the voltage has dropped to a reading of 13.1 volts. This indicates that in the short span between the alternator and the battery—a distance of perhaps three to four feet, the system has lost 0.9-volt. The standard for this simple test is 0.40 to 0.50-volt. So it should be obvious that the charge wire is undersized (which is common) or it’s a combination of a too-small wire and poor wire terminal connections. All of this adds up to lost voltage.

The solution to this issue is to minimize the resistance in the charge circuit between the alternator and the battery. This means a large charge wire as well as high quality connections. The net result will be the entire electrical system will run at or near the required 13.5 volts with all the accessories running. If you’ve equipped your car with a voltmeter as part of your gauge package, look for a running voltage reading of at least 13 volts with all the accessories running.

Another way to evaluate this is to turn the accessories on one at a time while watching the voltmeter in the car. This will give you an idea of which accessories require the greatest amperage load. Usually, this will be the electric cooling fans.

Another important step is to ensure there is a good ground between the body, the engine, and the battery. Poor grounds can cause excessive voltage drop because the circuit experiences resistance on the ground side. As an example, on an older Chevelle of ours, we noticed one day that the voltmeter lost nearly one volt when the headlights were turned on with the engine running. This was only a load of perhaps 8 to 10 amps, which is very low. The real reason was a poor chassis ground between the gauge package and the charging system that became obvious when the headlights were turned on.

Hopefully with these recommendations, you can produce a very efficient charging system that will have all your lights burning bright and your engine running very crisply.

10 responses to “Ask Away! with Jeff Smith: Achieving an Efficient Charging System in a ’70 Camaro”