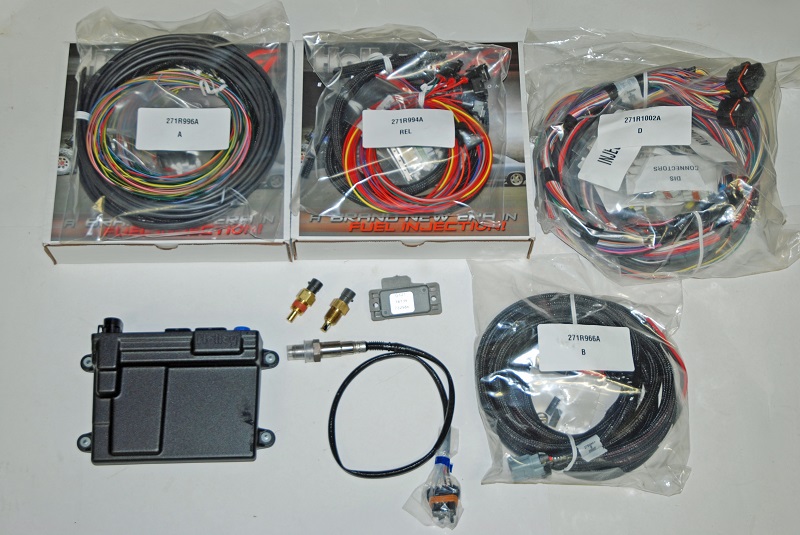 We’ve taken a good look at many of the Holley (and MSD) fuel-injection systems available.

They range from the basic, to over-the-top, in terms of function and capability.

You May Want to Read:

But one proven, seasoned system we have yet to look at is Holley’s HP EFI system.

HP EFI is actually the backbone of the fuel-injection package used on COPO Camaros. It also provides the basics for the EFI used in NHRA Pro Stock.

It’s easy to see that this is no shrinking violet when it comes to capability. In terms of potential, it’s outpaced only by Holley’s own Dominator EFI, and if you don’t need all of the Dominator features (like the ability to control an automatic transmission, or several optional outputs/inputs, or drive-by-wire), then the HP reigns supreme. 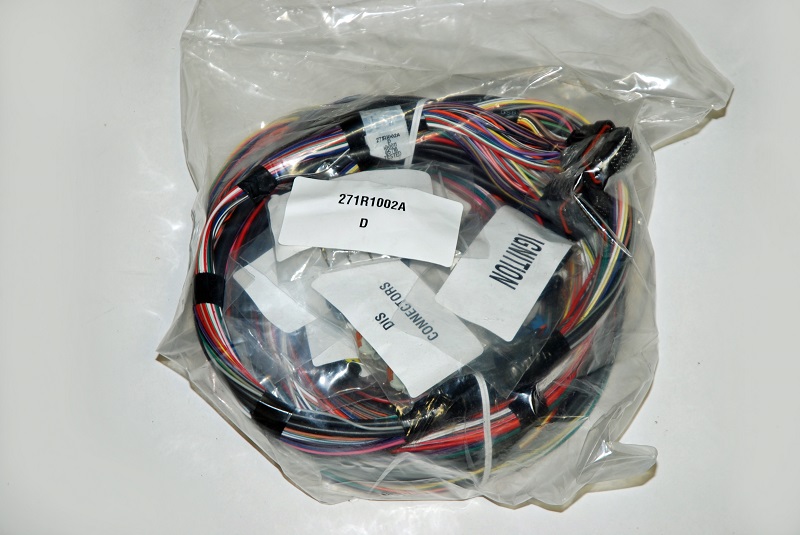 This is the primary wiring harness assembly required for use with the Holley HP series EFI system. With this particular HP EFI system, one end is un-terminated. (Image/Wayne Scraba)

So why is the HP EFI package the system of choice for the COPO Camaro, and why was it selected as the mandatory system for NHRA Pro Stock? Simple. It’s a highly tunable, full-featured package, and designed to be easily controlled by laptop computer.

Should the race team elect to use an O2 sensor for closed-loop operation, there is a specific sensor from Holley on the ‘legal’ list, but we suspect few teams actually use it. With this arrangement, Pro Stock engine tuners can pretty much play with all parameters except the rev limiter (which is restricted to 10,500 rpm per NHRA rules).

Just because the system is sufficiently sophisticated to run something like a supercharged COPO engine or operate a maximum effort Pro Stock engine doesn’t mean you can’t use it. In fact, Holley’s HP EFI system is just as happy running something like a heavily optioned, air-conditioned street rod or street machine (AC inputs are included in the base tune setup package) that will never see drag strip duty.

Like all of the Holley EFI systems, the HP includes EFI self-learn. In essence, you begin by setting up a base tune that includes inputs on engine displacement, camshaft specifications along with any power adders your car might have. The self-learning system constantly adjusts the fuel tables to the air/fuel ratio you select. More on the base tune-up later. 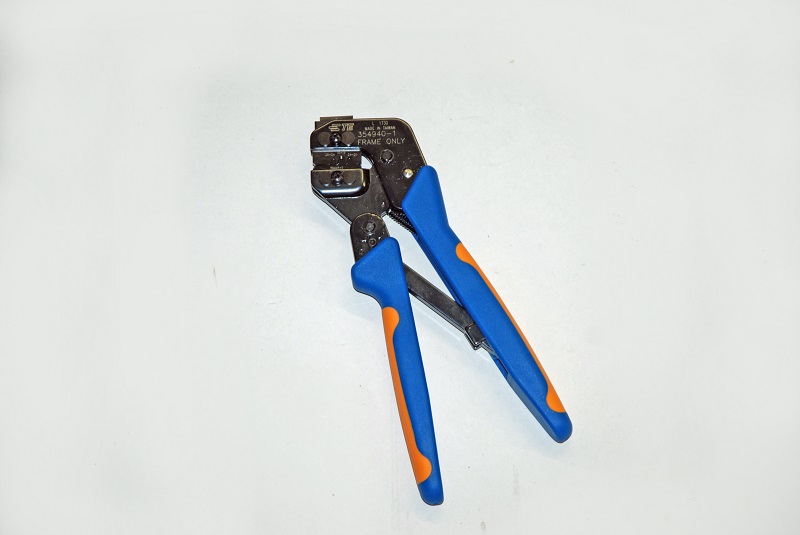 Along with the basic functions of controlling fuel and spark (right down to individual cylinder control), Holley’s HP EFI includes progressive nitrous control (up to four stages) along with water/methanol control. The system also includes an integrated single-channel wide band oxygen sensor control that works with NTK sensors or Bosch sensors, an integrated boost control, eight-channel Distributorless Ignition (DIS) outputs capable of directly driving ‘smart’ ignition coils or Holley DIS coils (for example, the setup found on Chevy’s LS power plant), up to a four-stage progressive nitrous control, as well as the ability to work with an external traction control system.

Holley’s Time Based Traction Management Systemis a great fit. The HP system also has the capability to operate a coil-on-plug system (for example, the setup found on Chevy’s LS power plant) and it also has the capability to control the fuel pump(s) and cooling fans. The Holley software allows you to create inputs and outputs for just about anything you might need. Case-in-point are engine safeguard shut-off controls for low oil pressure or high temperature. You can even use these outputs to control something like nitrous bottle heaters. 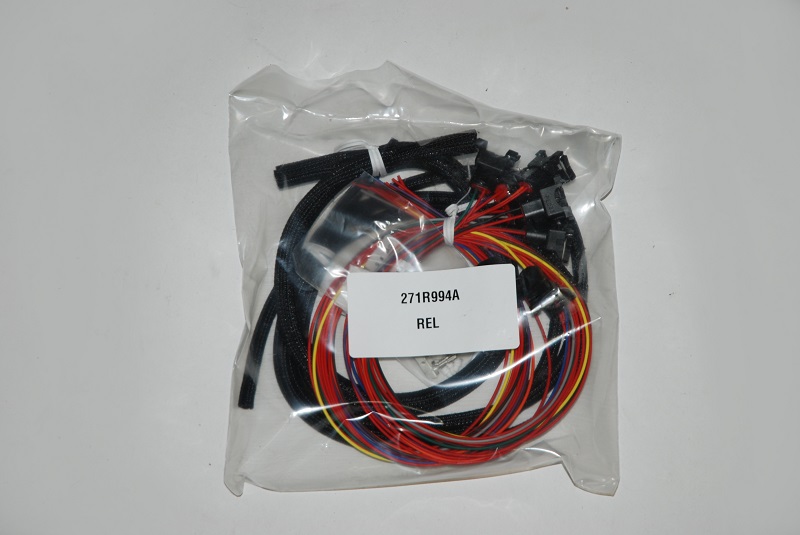 Technically, the HP system and the all-conquering Dominator system use the same software. Holley notes that the software has a “check box” if an HP is used. It can be found by selecting ‘Toolbox’ and ‘Preferences’ at the top of the software menu (once installed) on your computer screen.

According to Holley: “If you are using an HP ECU, select the ‘ECU is HP EFI’ checkbox. When you connect to an HP ECU, this will automatically be checked. If you are using a Dominator ECU, make sure this is not checked. This checkbox will hide the inputs and outputs that are not available on the ‘Pin Map’ for the HP ECU.” 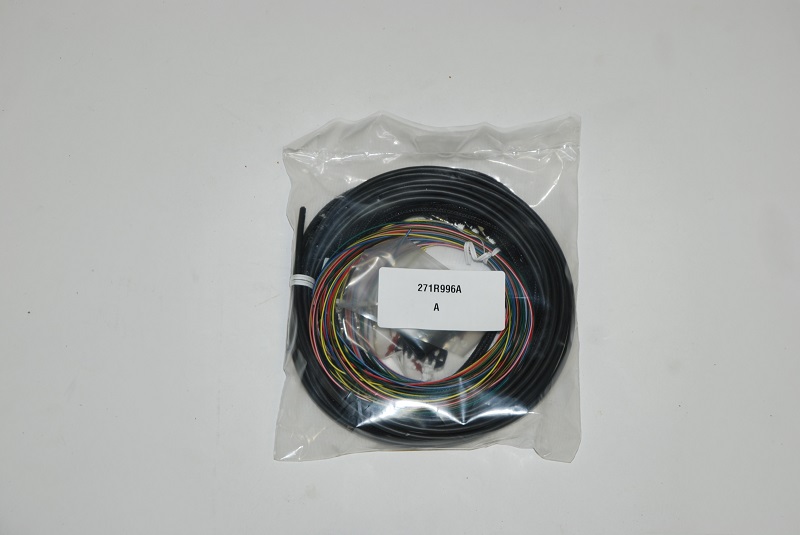 This is the ignition harness used in the universal HP EFI kit. Holley includes the wire jacket to cover the harness once it has been terminated. (Image/Wayne Scraba)

Meanwhile, both systems share the same firmware. The hardware is similar too.

Both systems (Dominator and HP) include Data Logging capability. With the HP, there is up to 2 GB of data logging available on board. Because of this, the HP eliminates the need for extra controllers since they are all self-contained within the ECU.

And just like its big brother—the Dominator, the HP EFI system Data Logging package surveys all sensors at a rate of 100 samples per second.

According to Holley: “Data Logging is extremely useful for not only reviewing race history, but for trouble shooting as well. Holley EFI can perform both PC and internal logging (when a laptop can’t be present). The number of items being logged as well as the rate of logging can be adjusted in the Datalog dropdown. Logging can be triggered by an engine start, immediately with an adjustable max on time, or triggered. It can be triggered by any input including RPM, TPS, nitrous activation, oil pressure reading, or a toggle switch just to name a few. Holley EFI has a data overlay feature, which allows for a data log to be traced on any screen in the tuning software. The internal logger has a huge 2GB of memory, and samples all channels up to 100 samples per second. This high sampling rate can be helpful when trying to diagnose a malfunctioning sensor. Each view can be saved separately for quick reference.” 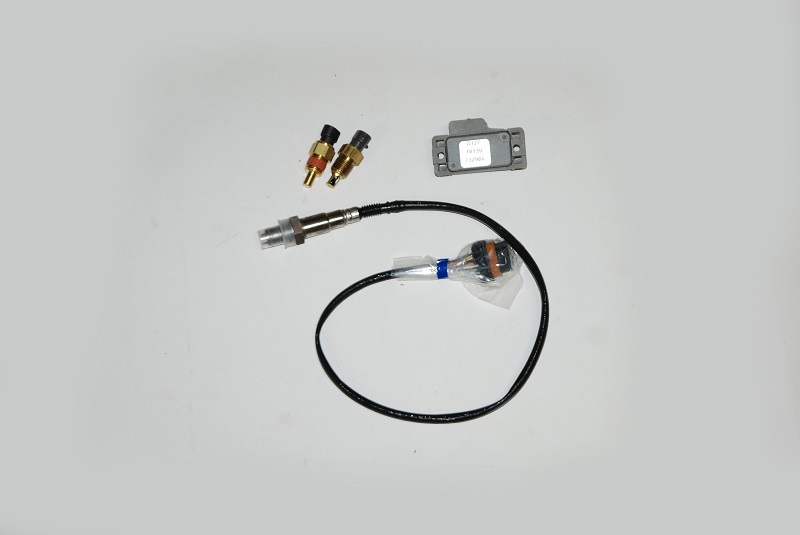 Primary sensors are included when you specify an HP system with a harness. Here you can see the wide band oxygen sensor (bottom) along with the manifold air pressure (MAP) sensor, manifold air temperature (MAT) sensor and coolant temp sensor (top, right to left). (Image/Wayne Scraba)

As far as the main wiring harnesses are concerned, they’re identical between both systems. But one part of EFI that regularly frightens folks is the maze of wiring required to hook it up. When you open up the box (we’re referring to the universal kit with partially un-terminated wires, there are several complete wiring harnesses to deal with.

But with a little time following a look through Holley’s detailed instruction manual, you’ll find it’s not very difficult. You’ll discover that all components are clearly marked and so are each of the wires in each of the specific harness assemblies.

Each connection differs from the others, so there is really no confusion with regard to which wire hooks up to which component. Many of the parts install into existing locations within the engine. Certainly some items, such as a header oxygen sensor or an air temperature sensor, might require a bit of fab work (such as drilling and tapping), but other bits are essentially plug and play. 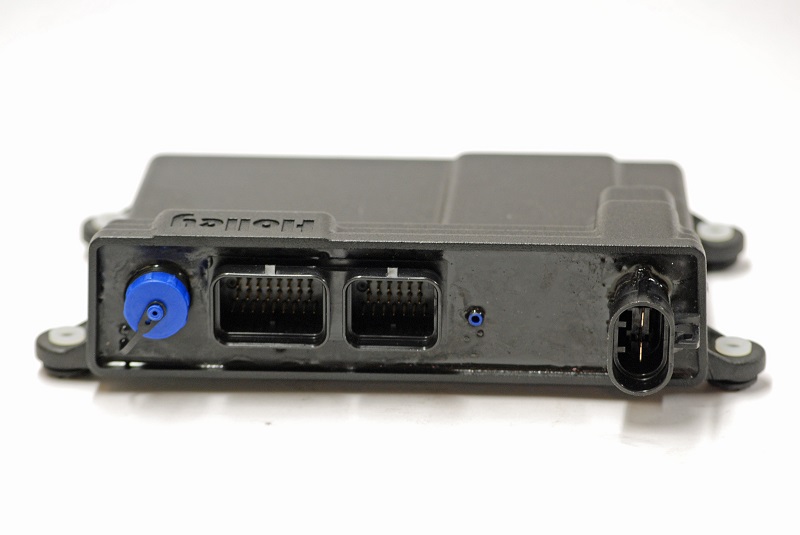 This is the business end of the Holley HP ECU. The main harness assemblies plug into the two ports on the left (they’re designated J1A and J1B). The main power harness hooks up to the port on the right. The little blue port just left of J1B is the barometric pressure sensor (no hook up is required). (Image/Wayne Scraba)

You know that check box system we mentioned above?

Holley uses that same arrangement to come up with the base tune for the system.

We’ve noted this with the other Holley EFI systems, but it’s worth repeating: The first step in the system setup is to select a base map from Holley’s anthology (there’s a collection of sample base maps stored within the EFI software included with the EFI package). You simply pick the combination that closest to what you run (or plan to run). These are the most basic fields, but Holley tells us one spot you can’t guess on is the fuel injector selection along with fuel pressure values. The reason for this is because of injector “pulse width.”

Holley explains: “When a signal from the ECU is delivered to the fuel injector, it opens and sprays pressurized fuel into the intake runner. The duration of time that the injector is open (this is called pulse width) is proportional to the amount of fuel delivered. If you’re not accurate with the injector sizing and fuel pressure values, then your basic tune won’t be right.”

Along with the pulse width portion of the inputs, you’ll also have to answer several simple questions about the sensors fitted to the engine along with several ignition related questions.

Like the Dominator, the HP system also looks after the ignition system. The first step is to fill out the “Ignition Parameters” section in the menu. In this case, the ignition type is designated.

The HP system is designed to function with four-, six-, and eight-cylinder four-stroke engines.

Ignition is a simple plug and play with GM LS engines (non-VVT), GM HEI, Ford TFI, along with magnetic, Hall effect triggers and coil negative systems (for non-timing controlled applications). Included are custom settings that can be configured for other applications as well. You can continue to use an existing ignition setup (case in point is something like a MSD 7AL2 box coupled with a crank trigger). The Holley EFI is compatible. 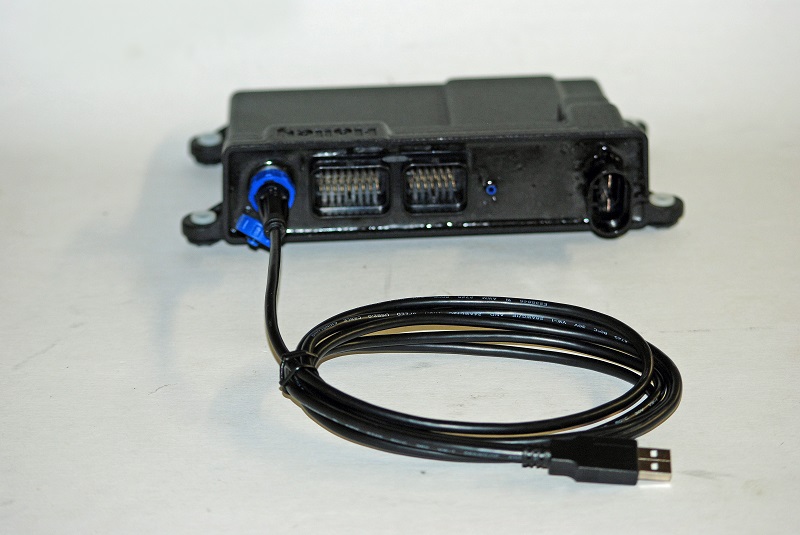 Holley supplies the cabling to hook your computer to the ECU. As you can see, the cable simply hooks up to the backside of the ECU and is linked to your computer by way of a standard USB port. (Image/Wayne Scraba)

With the basic questions answered in the setup menu, the HP EFI system will allow the engine to start and run off of the base calibrations mentioned above. According to Holley, ‘learning’ is when the ECU discovers the difference between the base calibration and what it actually senses in your particular engine.

As we’ve pointed out in past articles, with the Holley software, it’s possible to disable (or even slow the rate of learning). But for most of us mere tuning mortals, setting the “learning gain” to 100-percent is the easiest and quickest way to obtain a great running, electronically fuel injected engine.

You’ll find that the HP system can be set up and tuned for things like Startup Enrichment (Automatic Choke for EFI), Idle Quality, and Acceleration Enrichment, along with tuning by way Base Fuel Maps. We’ve covered those in detail before in our look at the Holley Dominator EFI system (linked at the top of this article). 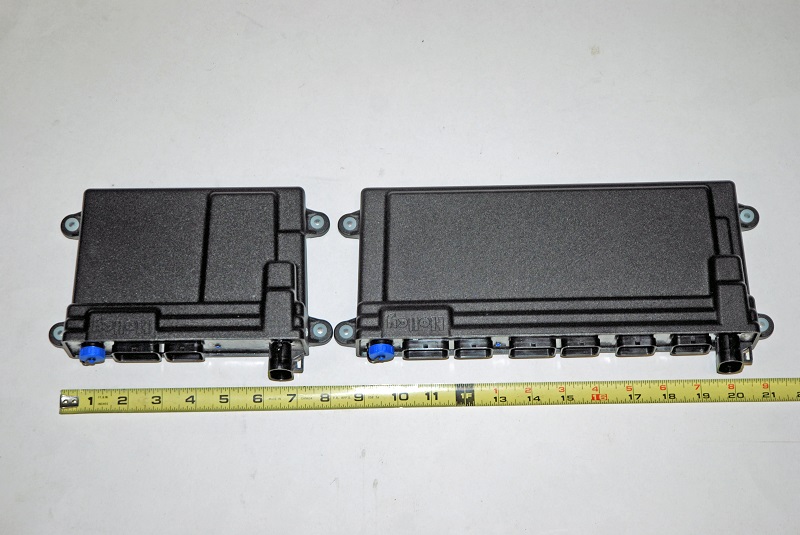 As you can see in these photo, the Dominator ECU has more ports (primarily inputs and outputs) when compared to the HP. It’s also considerably larger. (Image/Wayne Scraba)

It’s very easy to see that what pretty much controls a Pro Stock car or COPO Camaro can easily be used on your own race or street car.

Holley’s HP EFI systems are sophisticated management packages and for the vast majority of users, they should represent the pinnacle of performance. Prices are reasonable. Installation and setup are also relatively easy (provided you have a small amount of computer savvy).

Best of all, the simple setup process, along with the self-learning capability, takes a lot of the guesswork out of baseline tuning. The bottom line here is, with this system, you can be up and running in short order. What works for a COPO or Pro Stock car can also work for your car, even if it has A/C and a turbocharger (or maybe four stages of nitrous!).

It’s pretty much EFI for the masses.