Tool Time: What to Look for When Shopping for a Floor Jack 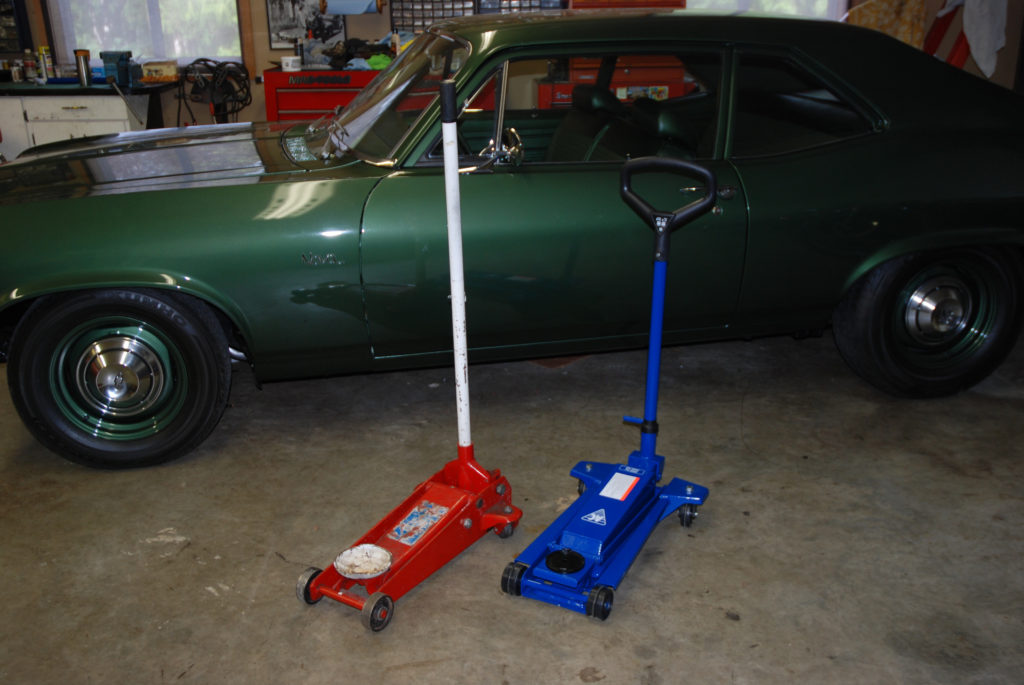 A few weeks ago I was struggling with my old floor jack—I rolled it under my Nova and eventually lifted the car up. A big issue is the handle needs to be pumped a lot to get it to lift.

This is a real pain when the jack is rolled deep under the car–for example, under the third member (more on this later).

When I was done, I attempted to lower the car and, instead of releasing cleanly, it took a lot of fiddling to get it to drop. Eventually it released after the handle was turned, jiggled and wiggled, but instead of coming down slowly, it was way too fast, scary actually…as in “Ka-Boom!”

As it turns out, the problem was the result of a heavily-worn release gear set (I’ve rotated and re-oriented the gear a few times already). Given the fact I’ve owned it for decades, I figured it owed me nothing so I bit the bullet and bought another jack.

To get there though, I realized there were a lot of choices out there.

Hence the idea for penning this article: what do you look for when shopping for a floor jack? As it turns out, Summit Racing’s catalog has dozens of different floor jacks available and there are a lot of options when it comes to capability (not to mention a wide price range too).

So in no particular order, here are some of the floor jack basics:

Capacity: How much do you need? Here’s my take: Once upon a time I had a big old five-ton jack in my shop. The thing was a brute: large and heavy. Now for my purposes, I figured a 2-ton jack was perfect–easily sufficient to lift one end of a passenger car up and down, and equally suited to lifting the front end of my pickup truck.

The worst-case scenario is lifting near the engine, where a floor jack is likely to support roughly 60% of the weight of the entire vehicle. (By the way, some jacks have a built in safety feature: if you exceed the capacity of the jack, the fluid will bypass and it simply won’t lift.)

Minimum Height: A lot of cars out there are pretty low, which can limit your jack choices. Sure you can roll your car onto a stack of spare lumber to gain some height, but that gets old in a hurry. Of course if you’re hobby involves lifted trucks or SUVs, then the minimum height isn’t a big concern. Bottom line: pick a jack with a minimum height that works for your vehicle.

Maximum Lift: The maximum height a car can be lifted is important. For most cars, a jack lift height of 20 inches is adequate. Unless of course, you’re into lifted off-roaders with huge tires—then you’ll definitely need something with higher lifting capabilities.

For many gearheads, a jack that is a bit wider with a long wheelbase will prove more stable. This is particularly important when the jack is fully raised. Alternatively, a narrow jack may fit more easily within certain chassis confines.

Material & Weight: You’ll find aluminum jacks and you’ll also find steel or steel/cast jacks in the Summit Racing catalog. The logic is simple: if you need to take a floor jack to the racetrack, then an aluminum jack is the answer, simply because it’s easier to lug around. If the jack spends its entire life in your shop, then a heavier jack makes sense.

Pumps To Full Height: This might seem trivial at first, but if you need a lot of handle pumps to reach the jack’s full height, it can get old in a hurry.

Case-in-point is the Nova in the photos. When the car is lifted at the rear center-section, the jack must be rolled a long way under the car. As I mentioned previously, my old jack requires a lot of full stroke pumps to raise the platform. Now, with the jack rolled way under the car, the handle can’t make full strokes. The handle makes contact with the back bumper. As a result, it takes what seems like forever to lift the car. FYI, some race jacks require very few full pumps to get to full height.

Build Quality: This is something that can be totally subjective, but over the long haul, a high quality floor jack will cost you less than buying several poorly made examples, constantly replacing them due to frequent failures.

And if you’re like me, a jack failure is something you really don’t even want to think about. The jack should be trustworthy so that you can confidently lift your vehicle and place it on jack stands. Consider your application and buy the best, highest quality jack you can afford.

Just remember, a floor jack is NOT to be used as a replacement for a set of sturdy jack stands.

As you can see, there’s a bit more to buying a jack than it may seem.

For a closer look, check out the accompanying photos. 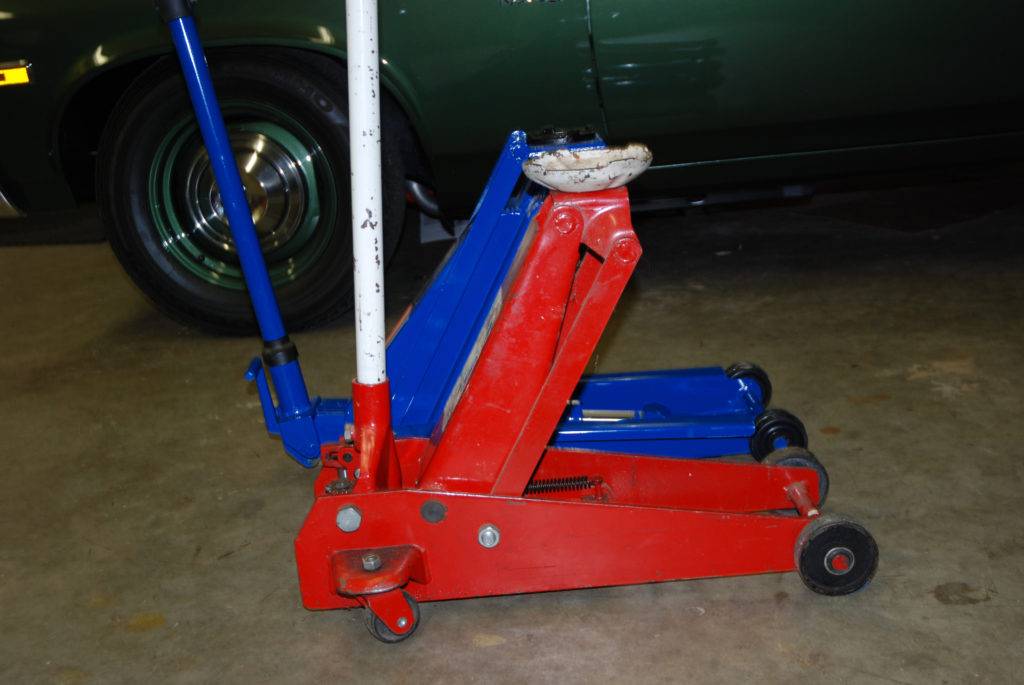 The maximum lift height of a jack is important. (Image/Wayne Scraba) 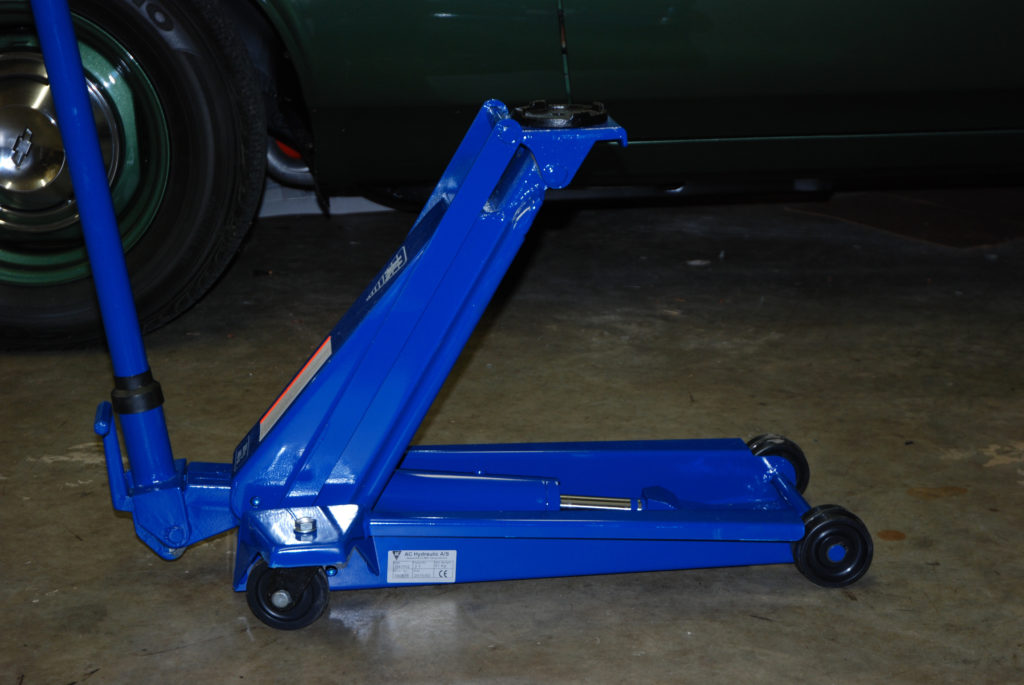 Many jacks have an overall lift height of 20 or so inches. That’s entirely adequate for most applications. We go into more detail in the story above. (Image/Wayne Scraba) 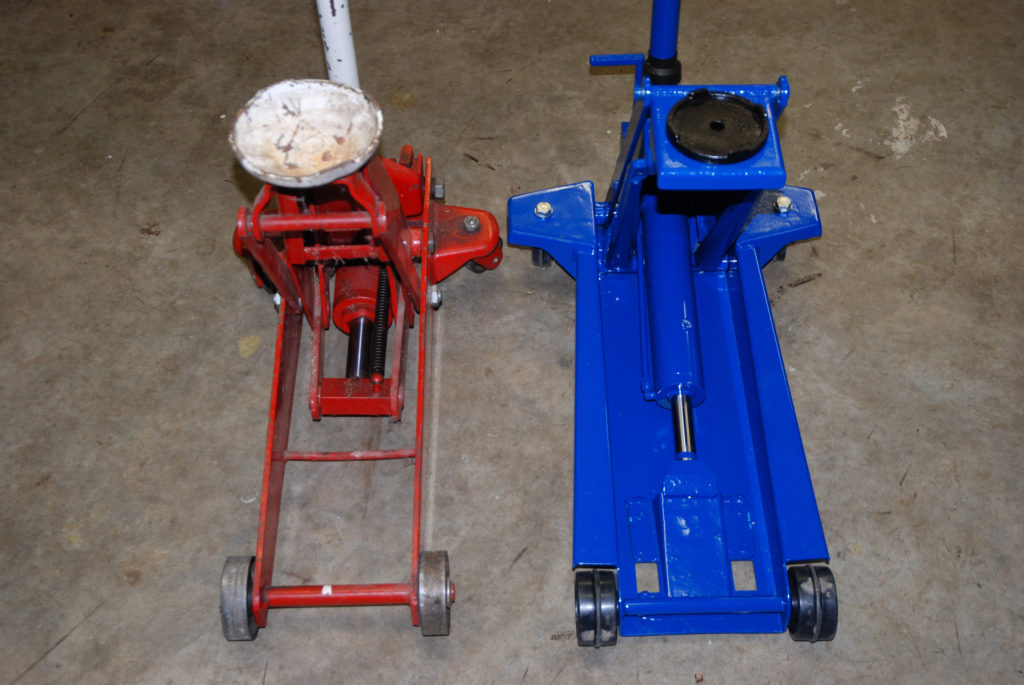 Here’s a look at the basic chassis layout of my old jack and the new replacement. As you can see, the new jack has a lot more beef in the chassis. (Image/Wayne Scraba) 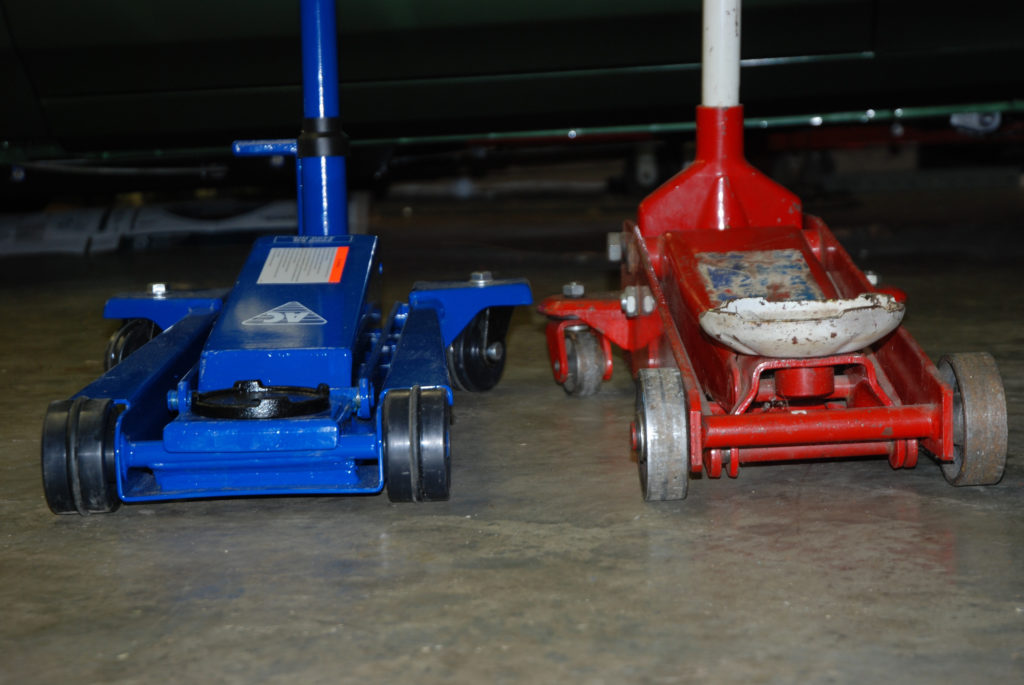 For many hot rods and racecars, a low jack is important. Here’s a look at the differences in two jacks (with and without the jack pad). (Image/Wayne Scraba) 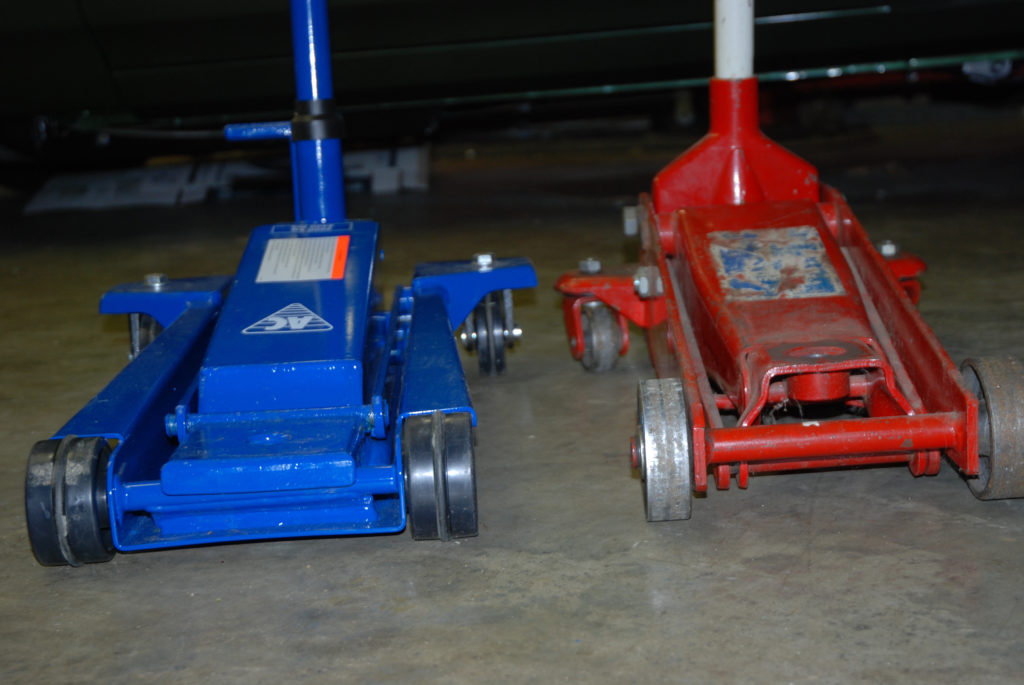 As you can see, the blue jack has a much lower chassis height. (Image/Wayne Scraba) 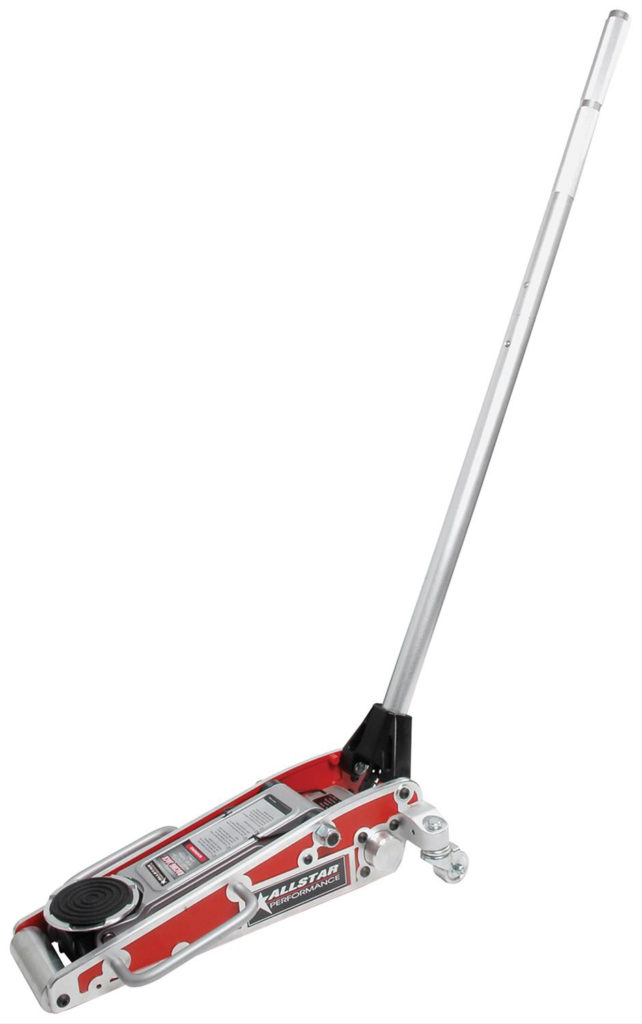 This 1-1/2 ton Allstar race jack is the example mentioned in the text. Not only is it light (44 pounds) due to aluminum construction, it only requires 3-pumps to get it to full height, which works out to 17.5-inches. (Image/Summit Racing) 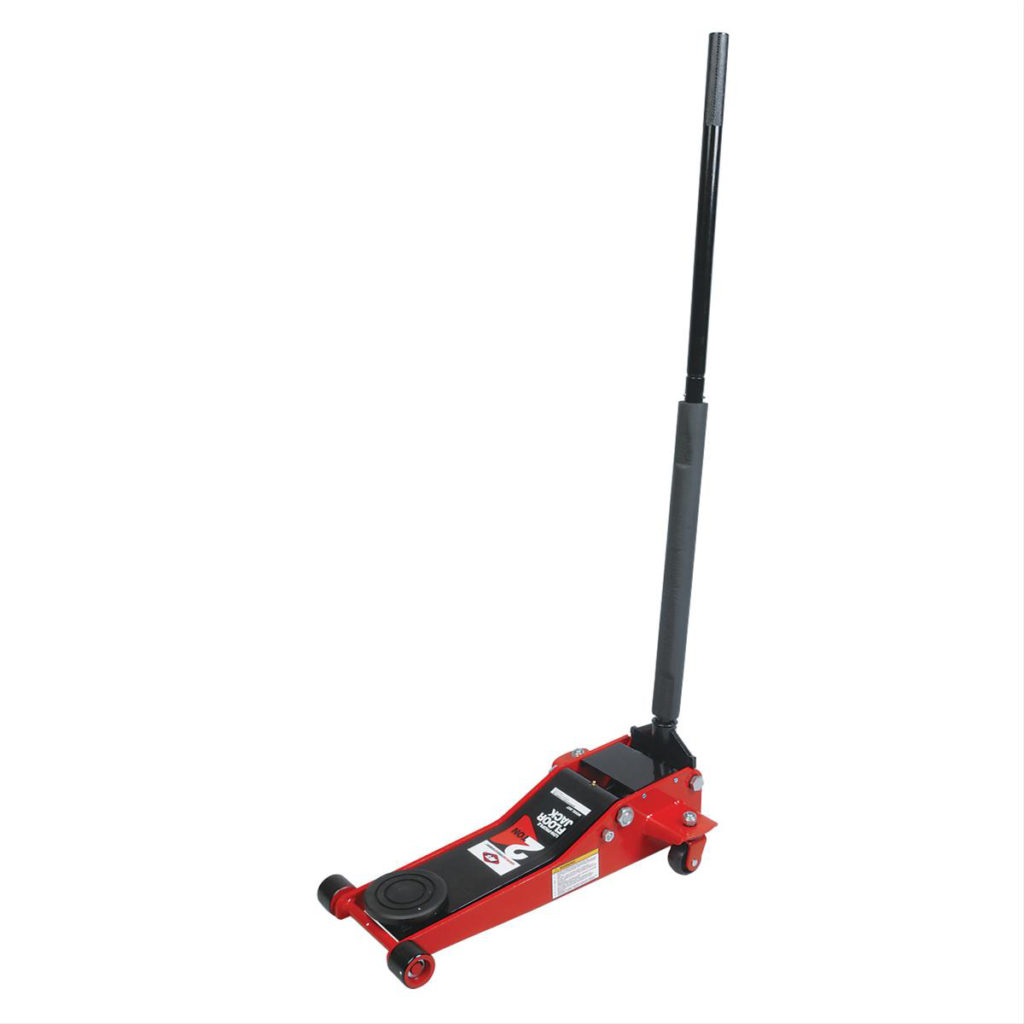 Summit Racing’s low profile jack has an extremely low overall height of only 2-3/4-inches at the nose. It also has a 20-inch lift height. It comes with a 2-ton rating as well. (Image/Summit Racing) 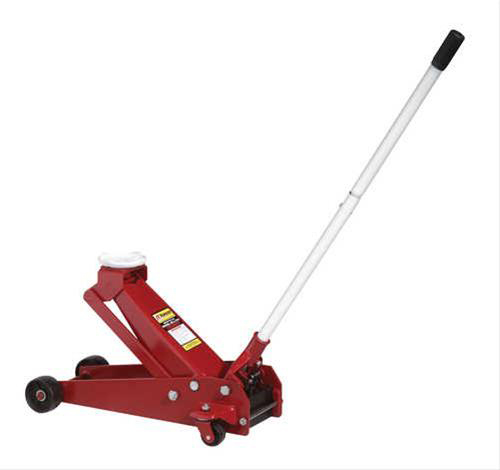 A great all around floor jack is this 3-ton capacity Ranger model. This jack includes a built-in safety overload feature (we talk about that in the story above). (Image/Summit Racing) 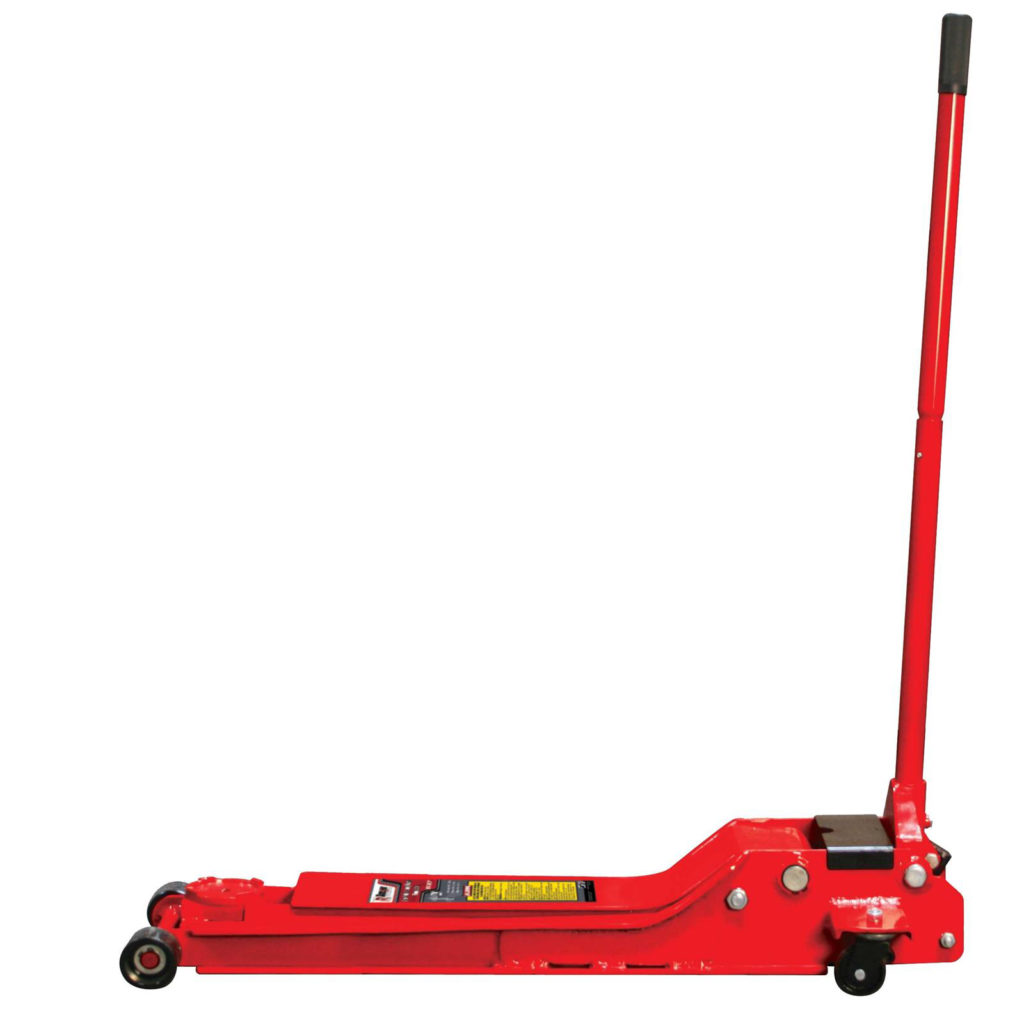 Here’s another low profile jack, this time from Ranger. This long-chassis jack has an overall height of only 2-3/4-inches, but it will lift up to 24-inches in height. It’s no flyweight though: The shipping weight of this all steel jack is 117-pounds. (Image/Summit Racing)

6 responses to “Tool Time: What to Look for When Shopping for a Floor Jack”