Ask Away! with Jeff Smith: How Camshafts Relate to Exhaust Smell 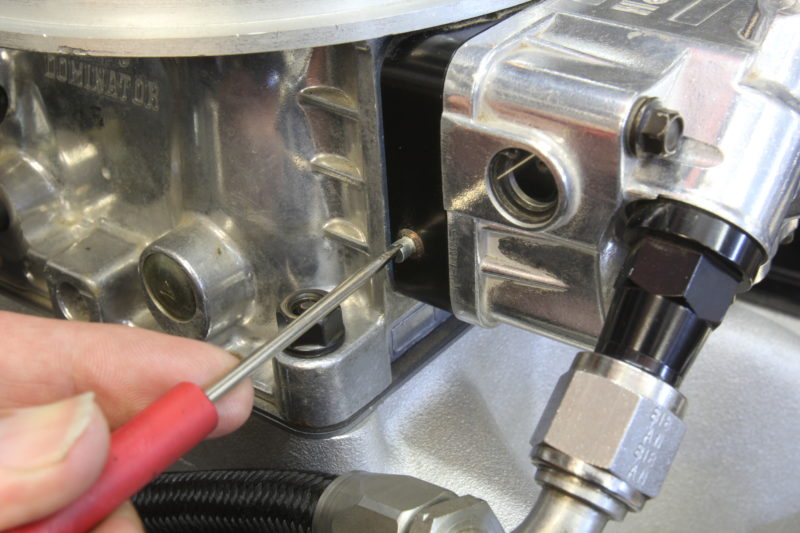 Setting idle mixture appears easy but the reality is that achieving an ideal mixture will require patience and attention to detail to truly get it correct. (Image/Jeff Smith)

I have a ’68 383 Road Runner, I bought it as a non-running car and it had a considerable cam in it when I got it—I think it is the Purple cam with 0.509-inch lift. The engine idles with only about 8-9 inches of vacuum.

I have a 5-speed Tremec TKO 600 in the car. I really enjoy driving it, and the ‘cammy’ sound. But the exhaust smells, it gets in our clothes and even my wife’s beautiful blonde hair. Inside the engine looks great. It has 906 heads and OEM rockers and shafts. The engine came with an Edelbrock Torker intake.

I have drilled 3/32-inch holes in all four throttle blades. The secondary blades are about ½-turn open on the back screw. The front throttle blades expose about 0.040-0.050 of transfer slot in carb. Jets in the primary are 70s. It idles about 950 rpm. Timing is set at about 20 degrees initial. It turns out to be about 58 degrees at 2,600 rpm with the vacuum advance hooked up, if I remember right. It also has a 6.5 power valve. I tried a 3.5 and a 4.5, but that only seemed to produce a lean surge at cruise speed of about 2200 rpm so I went back to the 6.5.

I have an Edelbrock Performer RPM dual plane intake I may try next, along with a new distributor with a limiter plate inside from FBO/4 Seconds Flat.

The engine has always given a rich smell, especially when pulling in the garage. I shut it off quickly and have a fan that blows toward the front to clear the garage out before I shut the door since the garage is attached to the house.

I’m planning to put in a milder cam this winter, along with the dual plane intake. Will advancing my present cam help? The car is a cruiser. It starts to wake up at about 3,000 rpm and pulls really well to 6,000 rpm.

So do you have any ideas on how I can fix this? Thanks so much for your time. I enjoy all your articles.

Jeff Smith: This is a very common problem and directly related to the camshaft.

I have several carbureted muscle cars and my wife hates it when I fire them up and let them idle. She closes all the windows in the house when I do that!

Because new cars for the last 40 years are emission-controlled, we are more sensitive to a rich running engine that does not have a catalytic converter! This is a good thing.

I looked up the ‘509’ cam and its specs are 248/248 degrees at 0.050 with a lobe separation angle (LSA) of 108 degrees. That is quite a bit of duration (but not excessive) for the street, and the tight LSA hurts the idle even more by creating more overlap.

As the LSA number gets smaller (from 114 down to 106 degrees), more overlap is created where the exhaust valve is closing at the same time the intake valve is opening.

Adding more overlap helps mid-range torque and top-end power, but it kills low-speed idle quality, which is why your engine only idles at 8-9 inches of manifold vacuum.

Everything we will discuss here will be mainly band aids to the actual fix for this situation.

You mentioned that you have drilled the throttle plates. That’s a very good first step to compensate because the engine creates less vacuum, so you have to make it easier for the atmosphere to push air into the engine by reducing the restrictions at idle.

It’s also good that you know about keeping those transfer slots closed down. It sounds like your throttle blades are adjusted properly.

So assuming you have a typical 3310 750 vacuum secondary, I would start with a couple of suggestions. First of all, with the engine off, gently screw in and count the number of turns on each idle mixture screw. They should both be the same and turned out approximately two turns. The further out the idle mixture screws are, the more fuel the idle circuit is adding at idle.

If the idle mixture screws are not the same, pick an average between them and make them both the same. With the engine warm, lean out the idle mixture, performing the same changes on both idle mixture screws. These will be very slight movements—like the width of the thin part of the screwdriver blade. Use a low-speed tach and vacuum gauge to evaluate the changes. When the vacuum falls off or becomes erratic, go back to where the vacuum is highest with the highest idle speed.

Once you have the carb set, reduce the timing by two degrees and evaluate whether the engine will idle at the same vacuum. If the idle stays the same by pulling timing back to 18 or even 16 degrees, that’s good. With as much as 20 degrees initial, the engine may be fighting itself at idle. If retarding the initial timing improves the idle vacuum, that’s a good change. If not, then reset the initial at 20 degrees BTDC. My guess is it won’t need more than 20 degrees BTDC unless this engine has extremely low compression.

You asked about advancing the camshaft.

This might help the idle quality slightly, but it does not alter the LSA, so this will be only a minor improvement. This camshaft is intended to be installed with a 108 degree intake centerline which means there is no advance ground into the cam.

But with all the work you would have to do to advance the cam, you are very close to just swapping the cam out altogether, which is a much better idea.

As a suggestion, the dual plane will likely help part throttle power and improve the drivability and torque at part throttle. But mostly you are fighting that camshaft based on the kind of driving that it appears you do. The long duration and greater overlap are the reasons why the engine only starts to pull hard after 3,000 rpm. You will not be able to get rid of the rich mixture completely until you put a shorter duration cam in the engine. That big cam combined with lower compression needs extra fuel because of exhaust contamination in the inlet manifold.

That blackness in the intake tract is residue left over from internal exhaust gas recirculation (EGR).

As you can imagine, this EGR kills throttle response and makes the engine lazy and unresponsive to tuning. All that exhaust gas won’t burn a second time—so it destroys combustion efficiency. That may be why the engine demands as much as 20 degrees of initial timing.

If all you did was install a cam with the same duration specs except moved the LSA from 108 to 114 degrees, the engine would run better.

In fact, I believe someone offers that exact camshaft. But frankly, it would run even better at lower speeds with a shorter-duration cam.

The engine may not respond well to these changes. Even big cams don’t need nearly as much fuel as you might think to idle—especially since you don’t have an automatic converter that loads the engine.

This will soften that unstable idle sound you like, but will instantly improve idle efficiency and part-throttle power. This will allow the engine to idle cleaner, requiring less fuel because it won’t have to overcome the built-in EGR.

A side benefit is that sooty crap inside the intake will also disappear. The engine will need less fuel to idle, it will smell better, run better at part throttle, the spark plugs will last longer, and even your oil will stay cleaner longer since less fuel will end up in the oil pan.

Best of all, your wife’s hair won’t smell like burnt hydrocarbons.

6 responses to “Ask Away! with Jeff Smith: How Camshafts Relate to Exhaust Smell”