Overheard in the OnAllCylinders newsroom:

Grouchy Editor: “Aren’t you finished with that article yet? There’s a mountain of stories that need written! What’s eatin’ ya boy?”

Writer: “Not happy with my work, I guess.”

Writer: “I just don’t like always writing about cars.”

Grouchy Editor: “Did you hear that everyone? This guy doesn’t always like to write about cars! Do you mind telling me what you DO want to do?”

Grouchy Editor: “Seriously? That’s what you want to do?”

Writer: “Yes. We need to write about this. I’ve been studying. It’s fascinating; you’ve no idea. Bumbles and Misfit Toys and Yukon Cornelius…

Well, we mostly write about cars.

We told that editor to take a stress tab and drink some eggnog out of his favorite moose-antler mug, and now he’s napping in the corner even though he’ll tell you he was just “resting his eyes.”

This is gift-giving (and holiday-decorating) season, and we only know a few people who can afford to gift cars and sometimes-pricey performance parts to friends and family. Which means we have to dig a little deeper, and even look beyond the garage, to bring the perfect holiday gifts to everyone we buy for.

We’ve already written about men’s hotrod T-shirts this holiday season. And hotrod garage and man-cave signs. And it won’t be long before we write about awesome hotrod die-cast collectibles courtesy of our friends at Summit Racing Gifts, Clothing & Memorabilia.

But on this most special of occasions, we dedicate this space to light-up outdoor holiday décor depicting our favorite characters from the 1964 stop-motion animated classic Rudolph the Red-Nosed Reindeer.

You won’t find a scooter for Jimmy or a dolly for Sue. You won’t find a hat- and whistle-wearing Coach Comet encouraging his students to bully Rudolph and exclude him from any reindeer games. You might be disappointed to discover you also won’t find a boomerang who won’t come back. We were.

But if Rudolph is a cherished part of your holiday memories like it is, ours’, you will find something awesome. (Hint: Yukon Cornelius and the Bumble are the awesomest.)

King Moonracer won’t let you stay forever, so don’t get any ideas, but since you’re already here you might as well take a quick look. Welcome to the Island of Misfit Toys. Beware of the Abominable Snow Monster of the North. He’s mean. He’s nasty. And he hates everything to do with Christmas. Side note: He probably bounces. But try not to jump off any cliffs with him, please. 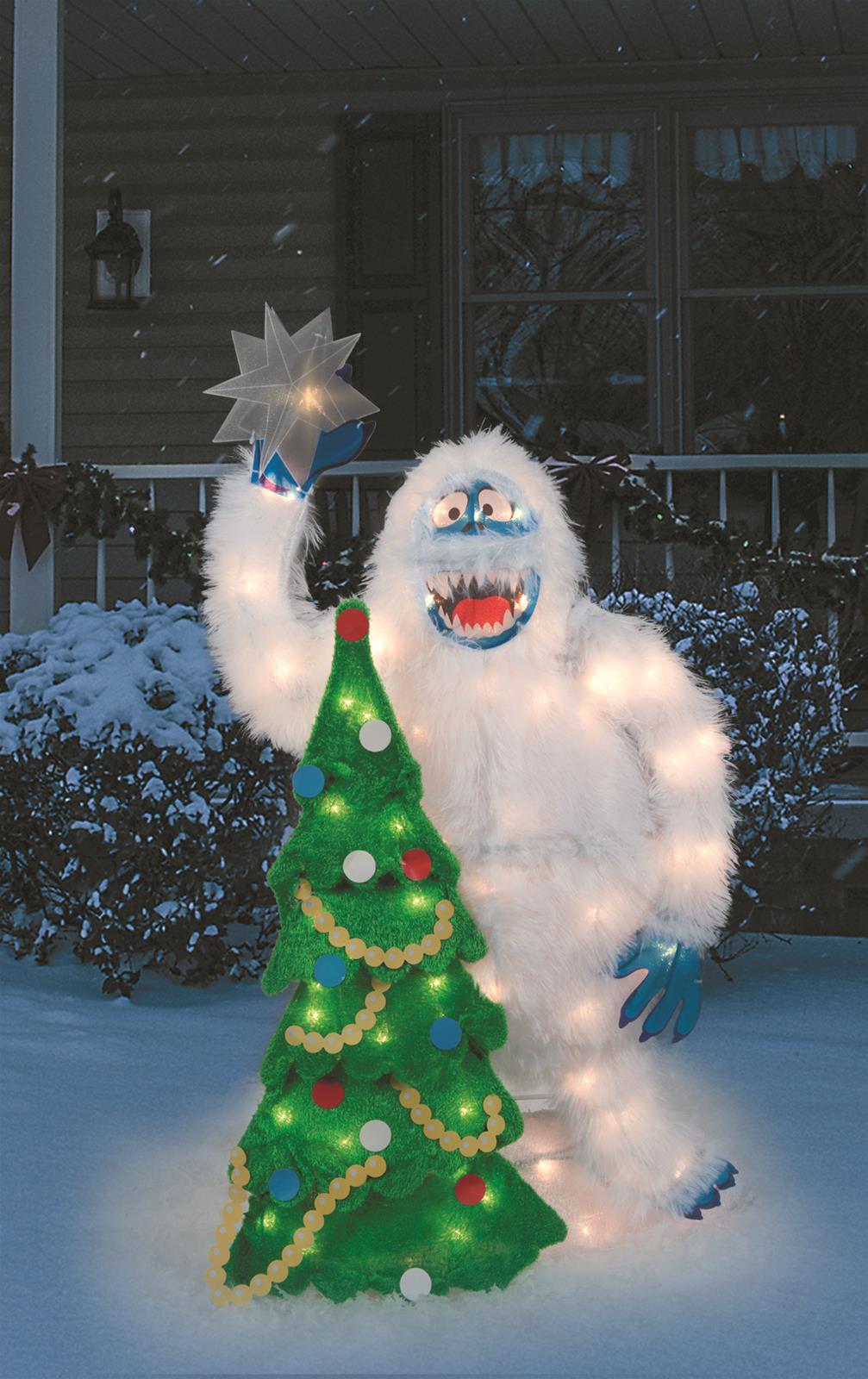 Like the previous Bumble, but with less depth and more tree. If he lives to be 100, he’ll never forget the big snow storm from a couple of years ago. Yukon’s off to get his life-sustaining supplies: cornmeal and gun powder and hamhocks and guitar strings. But he’ll give you a lift. Hop aboard, mateys. We’re going to stay with him and we’ll all be rich with the biggest silver strike this side of Hudson Bay. Silverrrrrrr! You thought he wanted gold? He changed his mind. He’s not just a nitwit. And you can’t fire him. Because he quits. She thinks it’s a handsome nose. He’s the official sentry of the Island of Misfit Toys. Because his name’s all wrong. Little known fact: The spotted elephant from the Island of Misfit Toys once made a cameo appearance in “The Simpsons.” Seriously. In the film, this boat cannot stay afloat. We’re honestly not sure whether this one will. They wouldn’t let us try. We only know no lawn-ornament Island of Misfit Toys is complete without it. LAANNDD HOOOO! No kidding.

If you’re anything like us, you continue to feel genuine surprise that the holiday season is upon us already, even though we say the same thing every year, and mathematical precision is inherent in how calendars work.

Whether you’re looking to spread a little extra cheer this holiday season in your own neighborhood, or to others’, displaying or gifting some light-up Rudolph the Red-Nosed Reindeer lawn ornaments feels like the right thing to do.

Not that you should listen to us. Because we’re pretty sure we’re on the naughty list.