How-To: Customizing Your Valve Covers to Create Something That Fits Your Style 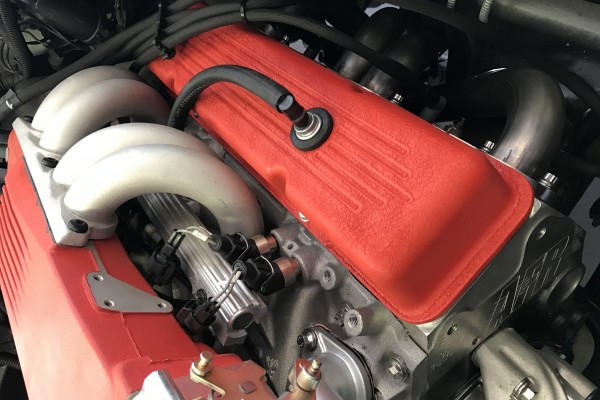 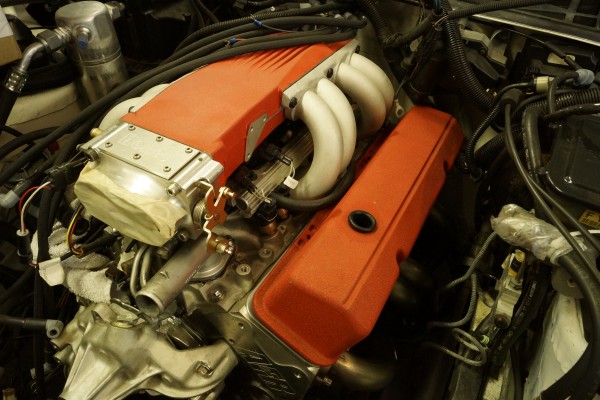 While the valve covers this engine employed worked fine on the engine dyno, it was a different story when it was time to drop it into the bay of this Third-Gen Firebird, with interference issues on both sides of the engine.

If it wasn’t the heater/air conditioning box on the passenger side, then it was the wiper motor—and in particular the washer fluid nipple—on the driver’s side that didn’t offer enough room.

Not wanting to have a corporate logo on the valve covers, we opted for these fine pieces from Billet Specialties. Part number BSP-95120 got us a pair of polished and ball-milled aluminum valve covers that include oil baffles and grommets as well.

So some would revel in the fact that we have such nicely polished and detailed valve covers, but they just don’t go with the theme of the engine bay that we were going for.

Since we are going to paint the valve covers, the polished finish won’t allow the paint to stick very well, so we got out the trusty palm sander, slapped on some 220-grit paper, and said goodbye to the shiny finish.

Here you can see the before and after effect of sanding. We just need to clean the surface of all of the sanding dust before painting. You can prime the parts as well, though we chose not to.

While the ball-milled area on the top of the valve covers was still relatively rough and raw enough to not require sanding, the bolt recesses were polished and thus required a little attention by hand.

Part number BSP-20820 netted us the accompanying Billet Specialties valve cover breather, but obviously we couldn’t leave it polished either.

Making life a bit easier on us with the breather was the fact that it came apart simply by unscrewing the two pieces. The base didn’t require any sanding, as it was just unfinished metal.

Our painting area was in the backyard near the fence where it would keep the wind down. No need to wrinkle coat everything with overspray.

VHT’s Wrinkle Plus paint is offered in Black, Blue, Red, and Gray. It’s a tough, durable finish that is supposed to resist color fading, degreasers, severe weather, and 350 degrees of intermittent heat. You can often find the black or gray hues at your local auto parts store, but you’ll need to special order the red or blue through a retailer like Summit Racing Equipment.

This shot of the valve cover is after the three coats have been applied. Be sure to alternate the pattern with each coat as this aids in creating the wrinkle effect. Here you can see the wrinkling begin to take place. After about an hour, it’ll mostly be wrinkled up.

Despite a subsequent set of coats to wrinkle up some smooth areas, we were still left with a less than desirable finish, so we broke out the heat gun. Patience is required here as you’ll wave the gun for some time before you see it begin to wrinkle. Be sure to keep the gun moving the whole time.

And there you have the wrinkling affect as it happens by air drying. Looks pretty good here, but there were a number of spots on each valve cover that required extra treatment, in particular, the sides of the covers.

The VHT Wrinkle Coat requires 48 hours of cure time before bolting your parts on. With the bright red finish, it’s easier to see the ample clearance that we now have.

The breather was sanded with 400-grit paper and then we painted the top with the VHT paint. It only took one application to get the desired effect. The base of the breather was taped off and we finished it with some attention from a red scuff pad.

If you take a close look, you can see the difference in the amount of wrinkling between the upper intake plenum and the valve cover that we just painted. It’s not enough for us to bother tearing the intake apart to recoat it, however.

So there’s a bit more work to button up this engine installation, but it is looking pretty sweet in all it’s 80s, TPI glory. Don’t settle for as-delivered when it’s so easy to create something different by melding styles.

Visit enough car shows and you’ll begin to see certain styling trends under the hoods of your favorite vehicles. We’ve all seen chrome, and billet, and more recently, the racy looking fabricated aluminum covers are the latest trend. But you don’t have to settle for what comes out of the box. If you look at your engine bay, and even perhaps your whole car build, you can give things a more personal touch, which will allow it to stand out at the local cruise in or the big car shows, and you can do this without much effort or expense.

Our 1987 Firebird Formula build recently received a new 383 stroker engine with a T-56 manual transmission behind it (pictured below), neither of which came from the factory, but both of which will bring the Third-Gen ‘bird to a more contemporary performance level. The owner kept with the original Tuned Port Injection system, but rather than polishing all of the aluminum bits or painting everything black, they opted to coat the upper plenum and valve covers with VHT’s Wrinkle Plus red crinkly coat paint and keep everything else natural aluminum. The overall look takes a page out of Ferrari’s handbook, and while you can order the actual crinkle coat that Ferrari uses, it’s only available through one distributor here stateside and you can buy a dozen or more cans of VHT for the same price. We highly doubt anyone is going to dispute the difference between the two at a car show, and the cheaper price is right up a hotrodder’s alley.

When this particular engine was assembled, it employed a pair of cast aluminum valve covers that were chosen for their clean, logo-free lines and their height that would easily clear the aftermarket roller rocker arms on the cylinder heads. Problems arose, however, when the engine was set in the car.

The valve covers have an asymmetric design and positioning it one way would provide clearance for the HVAC box on the passenger side. Unfortunately, the valve cover wouldn’t clear the windshield wiper motor on the driver’s side when oriented in the same way. After borrowing some stamped steel aftermarket valve covers, it was determined that a shorter valve cover would indeed clear the rocker arms, so now we just needed to find ones with the right look for the build.

Looking through the vast choices available at summitracing.com, we came across a pair of billet aluminum valve covers (BSP-95120) from Billet Specialties. The company has a great reputation for quality products, and the ball-milled finish mimicked the grooves in the TPI’s upper plenum. The only issue, if there was one, was that they only come polished. While we’d have to pay for that finish, it’s not what we ultimately wanted for the engine bay, so we would have to refinish them to our liking. Doing so was an easy enough proposition and the end result was just as we’d hoped.

When it comes to using the VHT Wrinkle Plus, there are three different methods for curing the paint. You can let it straight up air dry, you can use a heat gun, or you can bake the parts in an oven. Here’s our experience with all three methods.

Air drying the Wrinkle Plus usually results in irregular wrinkling, though that may have something to do with the valve covers having both vertical and horizontal surfaces when laying flat. Painting the parts and then slowing warming them up with a heat gun has proven to improve the consistency of the finish in our experience, but it doesn’t always guarantee a perfect outcome. Sometimes you need to lay down a few more coats in the flat areas to get it to wrinkle.

Baking the parts in an oven at 200 degrees for 20 minutes has proved to offer the best consistency in finish, however, we have noticed that the wrinkle effect is less pronounced when you do this and VHT makes note of it in the directions on the can. The upper plenum in this build was finished in the oven and you can see a slight difference in the wrinkling effect compared to the valve covers. Also, baking smelly painted parts in your wife’s oven can stink up the oven and the house for hours—the best bet is to find someone with an oven in their shop or garage that you can use. That said, we baked the parts in the house while the wife was away, and with the vent hood on full blast, and we then aired out the house and oven for 3-4 hours after baking and it seemed to be enough that even the sharpest of noses couldn’t detect what we had done. Is it better to beg for forgiveness than ask for permission? That’ll be up to you.

In the end, SummitRacing.com’s vast valve cover selection made it relatively easy to solve our valvetrain and engine bay clearance concerns, as well as allow us to give them a custom touch that will separate our build from the rest.