Battery Mounting Tips: How to Mount Your Battery for Optimal Safety and Track Performance 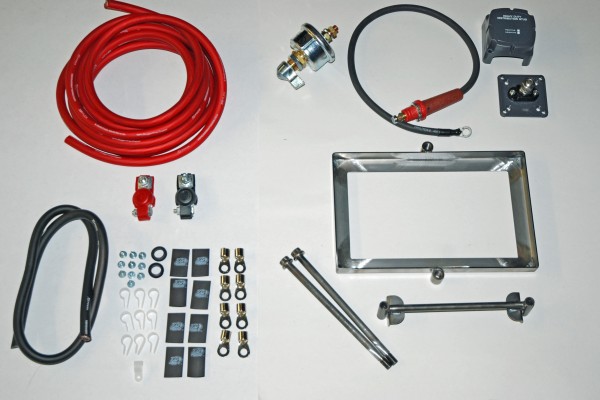 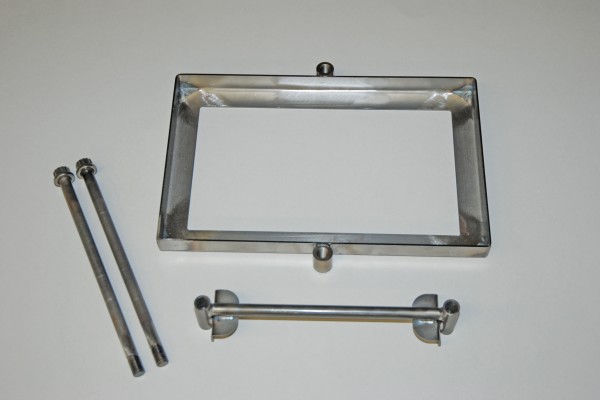 Jerry Bickel builds this lightweight, sturdy single battery mount setup. It’s built from chromoly, and it’s designed to solidly mount the battery in the trunk of your car. Bickel also builds these in dual battery configurations. FYI, some sanctioning body regulations mandate a 3/8-inch fastener size, which this system incorporates.

The design of an AGM battery, such as this big XS Power version, allows them to be mounted fore and aft or sideways in the car. Some chassis builders prefer to mount the batteries in a position that's parallel to the sides of the vehicle (which is the same as many Detroit installations).

If you're mounting a battery or two in the trunk, you'll need a rear battery switch. The primary reason for an easily accessible master cut-off switch is to allow someone to turn all electrical power off in the event of an accident.

When you mount a battery or two in the trunk, it’ll quickly become apparent that you’ll need some means of accessing power at the front of the car. Here’s one solution from JBRC. Summit Racing offers all sorts of other options (see: “electrical junction blocks”).

One other item you might want to consider is a battery cable disconnect. This assembled job is one Bickel uses on his pro cars. Summit Racing sells a similar Moroso example under part number 74156. FYI, the perfect location is at the firewall so that you can speed up engine changes.

Few of us give consideration to how and why battery mounting can be used as an advantage.

We know that the majority of drag cars and many street/strip machines have batteries mounted out back, but there are some specific factors to think about.

The direction a battery is mounted can prove critical for some battery types. Many OEM factory mountings place the battery in a location that is parallel to the sides of the vehicle. In older-technology flooded wet cell batteries, this prevents the internal plates from colliding and shorting if the internal acid solution migrates away from the plates. It’s a perfect system for a drag race application, because when the car hooks, the forces present will not throw the plates into one another if they’re dislodged.

Sometimes, mounting orientation isn’t a concern. For example, when you use an XS Power battery (shown in the accompanying photos), the internal plates are already anchored in place. The AGM (absorbed glass mat) design of the battery makes it difficult, if not impossible, for the plates to wander.

Keep in mind, though, other batteries might mandate a specific mounting orientation.

One thing you should always consider: battery weight.

For some NHRA racers, batteries can weigh between 100-150 pounds per pair, including battery boxes. The maximum weight depends on the class requirement as different classes have different regulations. The bottom line is your battery (or batteries) can be used to your advantage as ballast. Given the importance of weight, you need to give close consideration to the location of your battery and any ballast you use.

For most cars out of Detroit, there are only two or three ballast locations and one or two possible battery-mounting locations.

If that type of car is what you have in your garage, just where does the ballast go? We’ve examined ballast mounting in detail in this earlier post, so we won’t delve too deeply here. Suffice it to say, the type of car, along with the general layout, heavily influence where ballast and batteries can go.

Keep in mind, battery weight isn’t easily adjusted. Moving a 50-pound battery is difficult, and rules often dictate mounting locations for them. For example, batteries cannot be installed in the driver’s compartment for obvious reasons. That’s why trunk mounting is common. You also have to consider that space in something like a small front-wheel drive conversion is extremely restricted. In most cars, you can’t mount the batteries between the frame rails with the fuel cell and orient then in the standard side-to-side fashion.

This is one of the primary reasons most chassis builders solidly mount the batteries between the frame rails. You don’t want batteries flying out of the mounts. You can save weight in other areas, but battery mounts are no place to look for easy weight reduction (but you can opt for robust mounts that aren’t portly either — see below).

Pro chassis builder Jerry Bickel typically mounts the batteries side-by-side in the center of the trunk.

“We typically use AGM batteries in many of our cars,” Bickel said. “Although plate migration isn’t really an issue, we still mount the batteries with the plates parallel to the sides of the car. This eliminates any chance of an internal battery short. Given certain factors such as vehicle size, the choice of equipment on a car, driver weight, and so on, some cars are heavier than others. Because of this, the battery weight has a direct influence on the weight distribution in the car. Mounting the batteries outboard, with the fuel cell in the center of the car is an acceptable practice. But in a case where the car is heavy, you can’t remove one of the batteries to compensate for the weight easily. This would mess up the weight distribution.”

With Bickel’s setup,  you have the option of removing one battery without destroying the corner weights.

“Our dual battery mount package is designed so that you can use one or two batteries,” Bickel said. “Remember too that by mounting the batteries in the center of the car, you have the option of moving them forward or back, which can influence the weight distribution. I also feel a battery (or a pair of batteries) is safer when mounted between the frame rails. In a crash, the fuel cell has a better chance of withstanding an impact than the batteries. The batteries are more protected when mounted between the rails.”

Bickel also says battery height can be an important factor during mounting.

“…in a Pro Stock-style chassis, you have to consider the tunnel clearance for the wheelie bars in the trunk area. Because of this clearance criterion, the batteries have to be moved upward. If you mount the batteries too high, then the posts or other electrical connections can touch the deck lid. Pro deck lids are constructed from carbon fiber, and it’s a good electrical conductor. This limits the mounting location for the batteries.”

Not necessarily, but you should think about the electrical loads placed on the battery. In many cars, a pair of batteries is a serious bonus. If you decide to run a pair, hook them up in parallel. This effectively doubles their individual Amperes-hour capacity. To hook up the parallel circuit, route the “hot” starter lead to one battery, then run a line from the (+) post on one battery to the (+) post on the second battery. The second battery should then have its negative post (-) grounded with a cable joining both (-) terminals on the battery. Use batteries from the same manufacturer and of the same capacity. Only use new batteries and do not mix a new battery with an old battery. In other words, the batteries should be identical.

Sanctioning body rules mandate a battery shut-off switch in any drag or street/strip car with a rear-mounted battery or batteries. This will allow someone to turn all electrical power off in the event of an accident. There are a couple of different switch layouts available, but the most common layout includes a switch mounted inside the trunk with an external linkage/knob arrangement to turn the power on or off. Some master switches are only designed for momentary “on” service, which means they have no continuous rating. That’s why something like a common Ford starter solenoid can’t be used as a master disconnect switch. There are almost 200 different battery disconnect switches available from Summit Racing, and several have continuous ratings of over 300 amps.

Battery cables are important too. If you run something like 3/0-gauge welding cable from front to back on your race car, the weight will likely be excessive (typically, 3/0 cable weights 0.65 pounds per foot). Big cable is difficult to package too, especially if you’re trying to route it through a rocker panel. XS Power offers a good solution for race car applications with its single battery package. This 2-gauge cable kit includes 16 feet of red power cable, three feet of black ground cable, eight crimp terminals, a pair battery clamps, heat shrink material, grommets, wire clamps, and mounting screws. The kit was designed with the installer in mind, and can be completed with very few tools.

Don’t Forget About Charging Your Battery

As you can see, many factors go into mounting your batteries for optimum performance and safety.

In the end, think of safety first, then weight.

2 responses to “Battery Mounting Tips: How to Mount Your Battery for Optimal Safety and Track Performance”