High-Po Piston Tech: What You Should Know About Ring Lands and Grooves 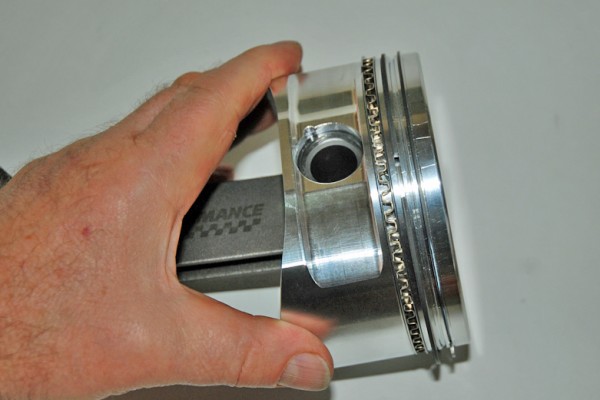 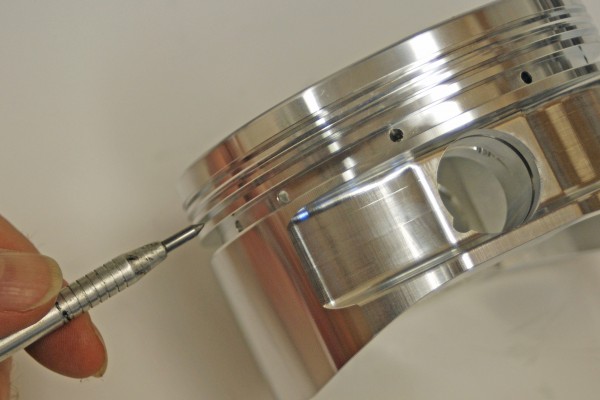 Here’s the most common piston ring format you'll find today: Three rings (top, second, oil). Although the layout looks familiar, there’s a lot of technology in the land area between the deck and the skirt.

Where the rings are situated in the piston is extremely important. The compression height of the piston, the size and depth of the valve notches and the overall dimensions of the ring package all dictate the location of the top ring land.

The second ring in the pack doesn't experience temperatures anywhere near those seen by the compression ring, but the land area between the top two rings must also deal with combustion pressure exerted upon the top ring.

The groove machined in the ring land between the top and second rings is called an “accumulator.” The purpose is to reduce pressure buildup between the pairs of rings.

Note the oil drain back holes machined into the piston in the backside of the oil ring groove. Round holes such as this are much stronger than large grooves.

Something else to contemplate is ring back clearance. It’s critical. Too much and you’ll throw away ring seal. Too little and you’ll end up with a ring that protrudes past the ring land.

When it comes to pistons, the most common arrangement you’ll encounter makes use of three piston rings — compression, second, and oil. Today, we’re turning our focus to the areas of the piston most associated with the rings: the ring lands and grooves.

Something else you’ll hear about in relation to ring lands is “tilt.” Some (but not all) manufacturers machine the actual ring grooves with a positive “tilt.” This tilts the ring package upwards by a very small amount to help with ring seating. We should also point out that the tilt is included in all of the ring grooves — top, second, and oil. (FYI, some pistons of questionable quality can actually incorporate a negative tilt. This will hurt performance more than it will help.)

The locations of the ring lands and grooves in the piston are dictated by the compression height of the piston, the size and depth of the valve notches, and the overall dimensions of the ring package. Most Detroit-built engines have the top ring from .300 to .400 inches down from the deck surface. In an endurance racing application, the top ring is typically .125 to .150 inches down. And in heavily modified race engines, top ring location can vary from .060 to .100 inches down from the deck. There are good reasons for moving the top ring closer to the piston deck. As the amount of “dead air” space between the top ring land and piston deck is reduced, the amount of trapped combustion gasses is also reduced. The combustion process is cleaned up considerably and power is increased as the rings are moved upward.

While pondering the location of the rings, we also need to consider how much material is found between the rings. While the location of the second ring isn’t as critical as the distance from the deck down to the top ring, it is still important. The second ring doesn’t encounter temperatures anywhere close to those witnessed by the top ring, but the ring land area between the top two rings must also support the combustion pressure exerted upon the top ring. Because of this, the width of the first land area is usually between .150 and .180-inch in a high performance piston and often much larger in a stock application. As far as the land area between the second and third ring is concerned, many high performance and race pistons incorporate a width of between .070- and .125-inch. This is narrower than the first ring land, but combustion pressures aren’t present (at least they shouldn’t be) and overall temperatures these rings see are much lower.

Another consideration is the actual ring clearance within the groove. To achieve proper ring clearance, especially where the compression ring is concerned, the ring grooves must be smooth. This is because the ring drops to the bottom of the groove during the compression stroke, eventually sealing against the machined surface. During the power stroke, the piston moves down in the bore, causing the ring to up in the groove and seal against the top of the machined surface. A poor finish in the groove will not allow the ring to seal tightly and pressure will leak past the backside of the ring. The result will be excessive heat discoloration or carbon buildup in the land area between the top and second rings.

Piston machining plays a major role when it comes ring performance. Some of the piston machining capability out there might surprise you. CP-Carrillo has used highly accurate inspection equipment to determine how machining methods had an effect upon the flatness of things such as the ring groove. This research led them to ring machining tolerances that are measured to one millionth of an inch. This means the ring grooves are absolutely flat for superior ring seal and increased horsepower.

The one exception to the vertical clearance rule is when pistons come with gas ports. When gas ports are included, there are usually twelve to sixteen .040- to .060-inch holes drilled vertically through the piston deck. They intersect with the backside of the compression ring groove and supply combustion pressure directly to the backside of the ring. This pressure means the ring vertical clearance can be decreased to significantly reduce ring flutter without effecting the seal. Of course, gas ports are only suitable for use in engine combinations that see frequent teardowns.

When all is said and done, the ring lands and grooves in a piston are far more sophisticated than you might think. Modern machining and measuring capabilities have made pistons and rings the most accurate in history. Best of all, this piston technology is readily available at companies like Summit Racing.

3 responses to “High-Po Piston Tech: What You Should Know About Ring Lands and Grooves”