Weight Training: Everything You Need to Know About Race Car Weight Distribution and Scales

All things being equal, a lightweight race car will always be quicker and faster than a heavy one. But even if you can’t take pounds out of the car, it’s a really good idea to think carefully about how weight is distributed.

The engine is typically the heaviest piece in any door car. Because it’s located at the front, the vast majority of door cars have a weight bias that favors the nose. Even purpose-built cars, like a contemporary Pro Stocker, have more weight on the front-end than the back.

When a car leaves the starting line, acceleration forces create load transfer from the front to the rear. This puts more load on the back tires and simultaneously increases traction. The catch here is there must be enough hook for the car to get moving and transfer the weight. It won’t transfer weight if it’s turning the tires. If there is too much weight on the nose, then traction suffers. If there’s too much weight on the back-end (for example, the car hits the wheelie bars hard), the car will be prone to wheelies. If the wheelie bars unload the slicks, then the car will spin.

With any rear-wheel drive car, the heaviest pieces are situated on or near the centerline of the chassis. Of course, when building a new drag car, the same applies as you tend to center the heavy bits. From a bare-bones perspective, it usually means there isn’t much difference in the side-to-side weight distribution when the car is placed on a set of scales. However, when you place a driver — particularly a big-boned one — into the left front seat, then the left-side weight bias of the car will change significantly.

To offset the driver weight, you can add or move ballast. That’s why many well-built drag cars actually have a place to mount ballast on the right door brace or “X” on the roll cage.

Bickel points out that corner-weight distribution refers to the amount of weight carried by diagonally opposed pairs of wheels.

“Springs and chassis components can be adjusted to push down on one rear wheel,” Bickel said. “This is called chassis pre-load. When one rear wheel is pre-loaded, the opposite front corner of the car will also have a weight bias.”

You can see this pre-load when the car is electronically scaled.

Bickel goes on to say: “Nearly all drag race cars must have at least some initial chassis pre-load in order to make the car run straight. This is because of the unbalancing traction effects of chassis roll and rear-end torque rotation. Lower horsepower cars tend to require right rear pre-load and high horsepower cars require left pre-load. This is due to the differing degrees of chassis roll between these cars. High horsepower cars roll the chassis significantly, lowering the right side pickup point (instant center). This adds traction to the right rear wheel. If the car lacks the power to create significant chassis roll, rear-end torque rotation tends to increase traction to the left rear wheel.”

When you analyze static center of gravity (CG) in your car, it can help to predict what the chassis will do. But no matter how much work you do you do in the shop trying to figure out the CG, it all goes out the window when the car goes down the racetrack. Everything here is dynamic, and no amount of number crunching in the shop can guarantee performance.

“The further that weight is located from the CG, the greater the inertial forces when motion is involved,” Bickel said. “Assume that the two example wheels are mounted on precision bearings (see illustration below). Both wheels weigh the same (200 pounds) and are perfectly balanced, but the one with the higher polar moment of inertia will require more effort to accelerate to spin.”

One way to slow the rise of the car’s front-end (pitch rotation) is to increase the polar moment of inertia. To do this, you can relocate any added ballast and heavy components (engine, battery, fuel cell, etc.) toward the extreme ends of the car.

“If the front of the car is not rising fast enough for proper load transfer, you can do the opposite and lower the polar moment of inertia,” Bickel said. “The car must pitch rotate around the rear axles, so mount ballast and heavy components as near the axles as is possible.”

The vast majority of drag cars are wheelie bar-equipped. That means the car actually has six wheels (sometimes five if a mono-wheel wheelie bar is used). With the car static and not accelerating, the weight on the car is distributed on four of those wheels, and there is no weight on the wheelie bars.

In a perfect world, once the car leaves the starting line, 100 percent of the load (or car weight) is transferred to the slicks. As shown in the illustration below, there is no load on the front wheels and no load on the wheelie bars.

Bickel tells us it is possible to exceed 100 percent weight on the rear tires at launch due to the inertial and aerodynamic forces involved in lifting the front end. This is only temporary, but if you can achieve this result, the car will have the best possible traction, and you’ll be rewarded with the best possible 60-foot times on your ET slip.

If you go too far, the nose will lift too high. This actually places load on the wheelie bars and removes it from the rear tires. As you can see in the accompanying illustration (below), 15 percent of the available load is placed on the wheelie bars. Traction is reduced and 60-foot times increase. Basically, the car is wasting energy going up instead of forward (and yes, we know plenty of Super Stock racers will disagree, but wheelies and S/S cars is another topic).

In a perfect world, a race car would make lap after lap without the wheelie bars ever touching the tarmac. That would mean 100 percent of the load transfer on the hook would be directed to the slicks. Unfortunately, there are forces at launch that make this notion almost impossible.

“High horsepower cars create a lot of up force on the front-end at launch,” Bickel said. “Ballast can be positioned to calm this pitch rotation, but it cannot be entirely eliminated. Without wheelie bars, a Pro Stock car would very likely stand on it’s rear bumper.”

Another problem is the inertial force involved with high rates of driveline acceleration.

“Anything with mass has inertia,” Bickel said. “To accelerate the driveshaft and other driveline components rapidly, great inertial forces must be overcome. This adds additional rotational torque to the chassis that is not present at the rear-end. The effect is similar to what you experience when you pull the trigger on an electric drill. Even with no load against the chuck, you can feel the rotational torque of the drill body as the mass of the heavy armature inside the motor is accelerated.”

These inertial twisting forces at launch roll-rotate the chassis and cause unequal rear tire traction, Bickel said. However, the height of the wheelie bars can be staggered (see illustration below) to stop unwanted chassis roll rotation and equalize rear tire traction.

“You will often hear racers state that the right wheel bar ‘steers’ the car at launch,” he said. “On Pro Stock cars, a ½-inch stagger is enough to correct the chassis roll rotation problems and create a straight launch.”

So what’s the bottom line?

If you’re serious about chassis setup, you should get a set of good electronic scales. There are more than two dozen sets available at Summit Racing, and they’re priced for every budget and every task. With your own scales, you can accurately set up your car, plotting and adjusting front-to-back, side-to-side, and corner weights. The scales also allow you to figure out exactly how much (and where) you’re pre-loading the car.

It’s also a good idea to regularly scale the car. Track use and abuse can change how the car scales (for example, something in the car might get bent or broken). Sure, scales won’t help you when it comes to chassis dynamics, but that’s where on-track testing and adjustment come into play. In either case, keep good records and we’re pretty sure the end result will be a much more consistent, safer race car. 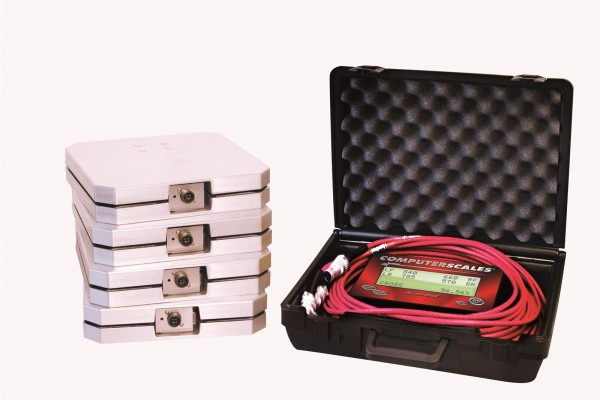 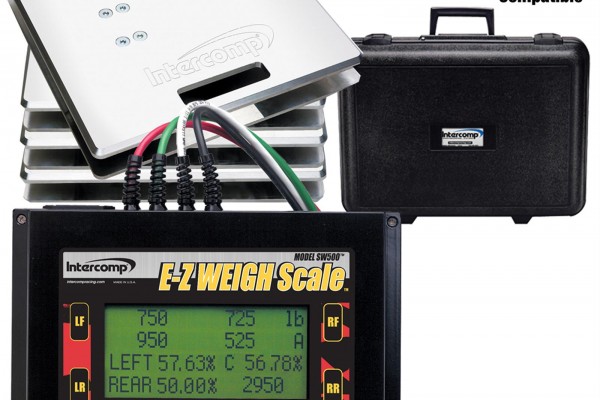 Summit Racing sells this Longacre AccuSet II Digital Scale. It's a relatively affordable package that has a capacity of 1,100 pounds per scale. The neat part about this scale is that you push one button for all four-wheel weights and a second button looks after all partial percentages.

For a wee bit more, you can purchase this Intercomp SW500 E-Z Weigh setup. The capacity here is 1,500 pounds per scale. It allows you to calculate center of gravity along with all of the standard percentages. Better still, it stores 100 different chassis setups.

Here’s another Intercomp scale setup. It's a wireless package. This particular scale package offers quick setup, which means it’s easy to use at home or at the track. Scaling a car at the track (particularly when you’re testing and tuning) might be something you might want to ponder. It can give you a decided edge when it comes to chassis tuning.

5 responses to “Weight Training: Everything You Need to Know About Race Car Weight Distribution and Scales”