You did not misread that headline.

And, while it’s still April, this is not another one of our famous April Fool’s pranks (but rumor has it a national sanctioning body is putting a drag strip in Cuba).

We spotted this Lamborghini-powered motorcycle last weekend at the Summit Racing Equipment Atlanta Motorama. There was little info on the bike at the show, but a bit of homework taught us it belongs to Georgia resident Chuck Beck.

According to AutoBlog, a friend of Beck’s gave him the engine after his Lamborghini Espada died in a fire. Beck married the V12 to a three-speed Volkswagen transmission and stuffed the package into a custom motorcycle frame with custom linkage to steer. The radiator is in the back of the bike to get heat behind the driver.

Caffeine & Octane featured Beck and the bike in a short video interview (below).

“Once you’re up and moving it handles pretty much like any motorcycle would,” Beck said in the video. “It’s not geared to go real fast: only about 140 miles an hour.

“It goes without saying I’m kind of proud of the way it turned out. It’s been a crowd-pleaser anywhere it’s gone. And we hope to play with it for a while until the next project comes up. In the meantime, we’ll continue playing and maybe I’ll learn to ride the thing.”

See more pictures and a video of the bike below. 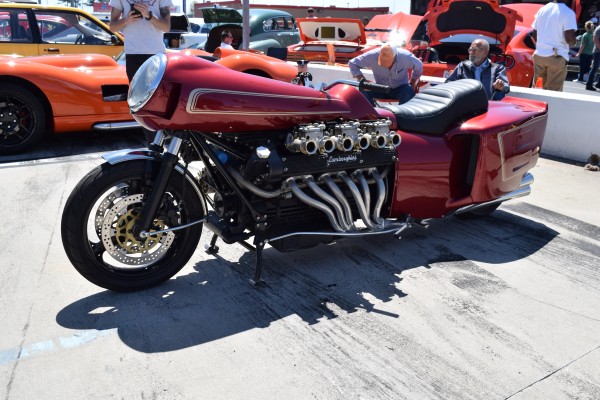 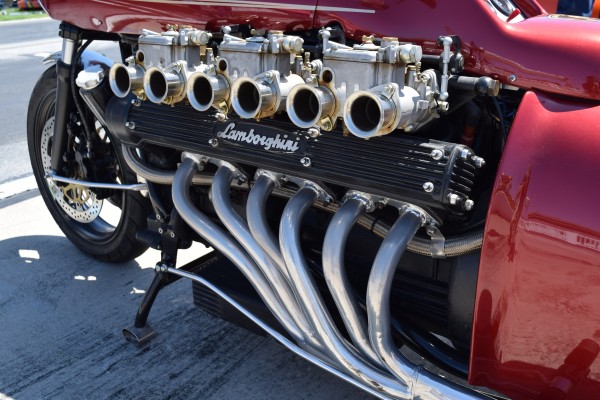 4 responses to “Atlanta Motorama: A Lambo Engine in a Motorcycle?”