“Does it make sense to write about a plane?” I asked myself on the way back from the Summit Racing Equipment Atlanta Motorama.

Well, we are OnAllCylinders.

How many cylinders does a plane have?

The 1973 Bellanca Citabria 7GCBC I flew in is powered by a Lycoming O-320-A2B engine, which has four cylinders and makes about 160 horsepower at 2,700 rpm. In other words, not much more than a Dodge Neon, but enough to propel the small Citabria through stunts an F-14 might be more well known for due to the commercial success of Top Gun.

Top Gun was released 30 years ago today. And, while the Citabria can’t be compared to a fighter jet, a good pilot can make it carve through the air like Maverick (RIP Goose).

I, like many others, grew up watching Top Gun. I pretended to pilot an F-14 while propelling the swings on my backyard swing set as high as I could take them. As I jumped from the swing, I’d pretend to release my parachute.

And I finally got the opportunity to play Goose last month in a Citabria. The pilot, Kevin Harper, owner and Chief Flight Instructor at South Atlanta Flight Training, and a close friend of a fellow Summit Racing employee, offered to take me on a short flight to capture aerial shots of Atlanta Motor Speedway during Atlanta Motorama.

I managed to get some excellent pictures of the massive speedway, which puts into perspective just how many cars and people were at the event. But the real fun started when I had finished. 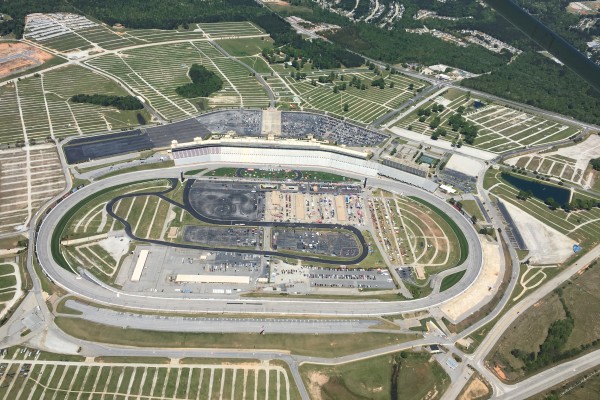 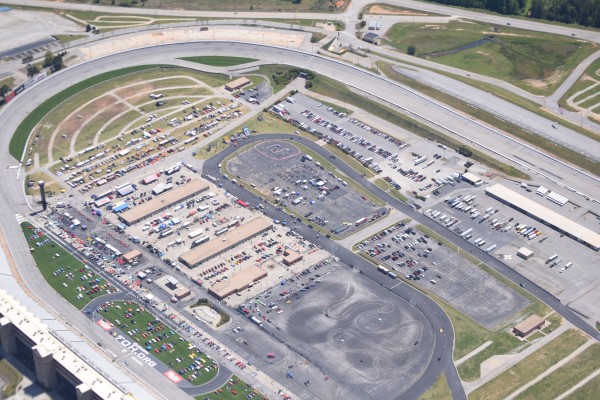 “Get what you needed?” Harper asked me. “Want to play around for a little bit?”

Harper served our country in the military, and has spent the past 20 years flying and teaching flying lessons. I had never been in a plane like the Citabria, but my grandfather spent many years flying small planes. How could I say no? Besides, how much is a little 160-horsepower plane capable of, anyway?

Harper’s first stunt pushed us to 4 Gs — a feeling typically reserved for racecar drivers and roller coaster enthusiasts. It seemed to be quite the feat for the Citabria, and I was feeling confident.

“What else you got?”

Harper didn’t exactly tell me his next stunt would involve the plane doing the equivalent of a backflip in mid-air, but that’s exactly what it did. He followed it with a corkscrew and, for his final stunt, essentially made the plane go in a free spin.

“We’re going to do about seven rotations,” he said.

“Seven?!?!” I asked. I wasn’t sure we would manage seven before hitting the ground.

That made me feel so much better.

We had to wait for another plane to pass below us, then Harper said “here we go,” and then the plane spun downward.

I was as scared as I’ve been in my life as he counted off the revolutions.

Harper recovered, and I exhaled. Moments later, he landed the Citabria in a grass strip next to the runway, and I’d never felt so happy to be on land.

But I’d also never had such an exhilarating feeling. It was similar to the rush I got riding shotgun in a famous autocross car at Atlanta Motorama 2014, but seemingly with much more risk.

So, does it make sense to write about a plane? I concluded that enthusiasts like all sorts of engine-powered machines, and Summit Racing, while specializing primarily in automotive parts, sells many products for planes, boats, tractors, and other equipment. For many, our hobby is about the exhilaration only an engine-powered machine can give us. And what a rush that Citabria provided.

Special thanks to Kevin Harper and South Atlanta Flight Training for giving me the opportunity to get the awesome aerial pictures of Atlanta Motorama and Atlanta Motor Speedway, and thanks for making me feel like Goose, if only for a few minutes.

One response to “Top Gun: Aerial Photos and a Plane Tailspin at Atlanta Motorama”