Our friend and OnAllCylinders contributor Jesse Kiser picked up a 1974 Honda 360 as a first bike for his wife, who is new to motorcycles. The Honda’s exhaust pipes were solid but rusted, pitted, and plain ugly. Getting exhaust pipes for a 360 isn’t hard, but getting a nice set isn’t cheap.

Like most everyone else, Kiser is not made of money and had a budget to stick to, so he opted to rehab the old pipes.

Kiser decided to go the exhaust wrap route. It’s easy to install, inexpensive, and looks a lot better than grungy steel. Another benefit of the wrap is that it moves heat transfer down into the muffler and away from engine or the rider’s shins.

Jesse went with Summit Racing’s Volcano Exhaust Wrap. Made with crushed lava rock, Volcano Wrap is rated to 1,800 degrees F continuous and 2,500 degrees F intermittent. Unlike fiberglass wrap, you don’t need to soak the Volcano wrap in water. And the titanium color looks pretty tough. Like most exhaust wrap, Summit Racing’s Volcano Exhaust Wrap is designed for use with locking ties, but for bikes you can get away with hose clamps. Jesse went with the latter because it’s cheaper and you can’t see the end of wrap under our pipe cover that’s factory for certain Honda 360s.

Installing exhaust wrap on motorcycle pipes isn’t difficult, but you have to have some patience to get the wrap to lay down properly. For example, loosely wrap the material around the pipe just once, holding it in place with the tips of your fingers. Measure how many loops will cover the pipe completely, allowing for a quarter-inch overlap. If you can, go a little bit long.

Follow along below as Jesse turns his 360’s pipes from blech to bitchin’. To learn more about Jesse’s Honda build, see the article series at his motorcycle blog, Rideapart.com. 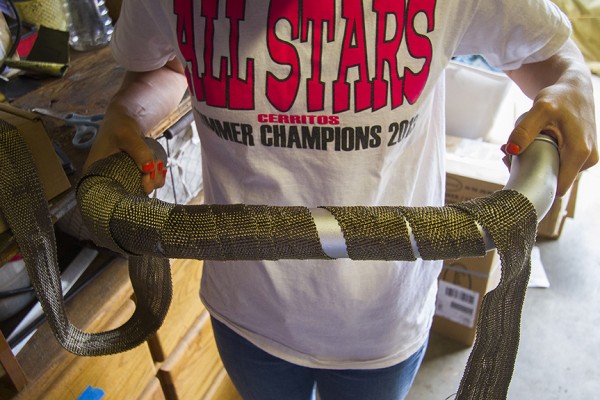 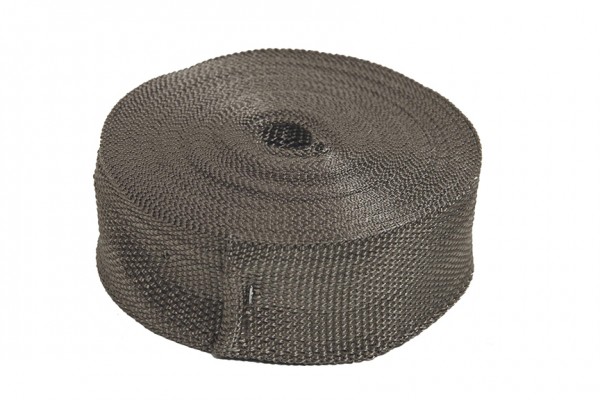 Jesse removed the exhaust pipes from the manifold and removed the pitted rust marks with a fine wire brush on a six inch bench grinder. He then painted the pipes inside and out with a high temperature exhaust coating. The coating will help prevent any rust from forming if water gets between the exhaust wrap and the pipes. Summit Racing offers POR 15 High Temperature Exhaust Coating for this job. To start the wrap, loosely wrap it material around the pipe. This will let you keep your hands tight on the wrap material without having to pull a hand away to wrap it around the pipe.

Summit Racing’s Volcano Exhaust Wrap uses crushed lava rock as its insulating element. It’s rated to 1,800 degrees F continuous and 2,500 degrees F intermittent. There’s no need to soak the wrap in water, which you have to do with fiberglass-based wrap. Jesse got a 100 foot roll of two inch wide wrap. The Honda exhaust only requires around 25 to 50 feet, so there is plenty left for another bike project.

Before starting the wrapping process, make a 1/4 to 1/2 inch diagonal fold at one end of the wrap, making sure the edge is underneath the fold. This will create a neat end point and keep the wrap from fraying. Make one full wrap around the folded section before moving down the pipe. Wrap your exhaust so the exposed ends are facing away from the wind. If the overlaps are on top of the material, the wind can peel it back and cause the wrap to fray and come apart.

We started wrapping with a 1/4 inch overlap. You can decide if you want more overlap for the look and heat protection, but ultimately 1/4 inch was the best for us. Being newbies, we literally used a ruler to measure the wrap on the first pipe. Remember which direction the wrap is going and pull the material at an angle to obtain the proper look.

Once you have completed the wrap, trim off the excess with a sharp scissors. Attempt to make it as clean a cut as possible. Fold over each corner so you get a slightly pointed end.

The finished product. You can use locking ties to secure the wrap to the pipe, or use hose clamps like we did. Hose clamps are less expensive, and you won’t see the end under the pipe cover that’s factory for certain Honda 360s.