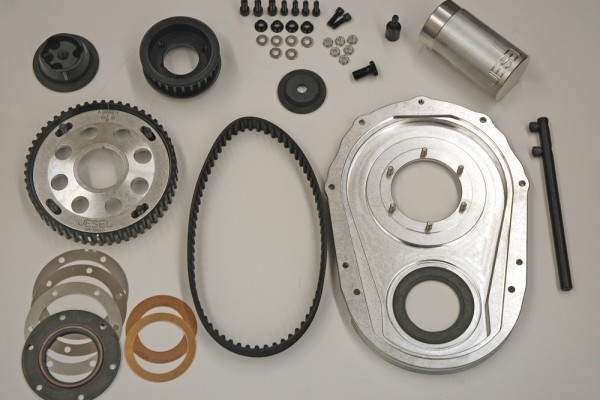 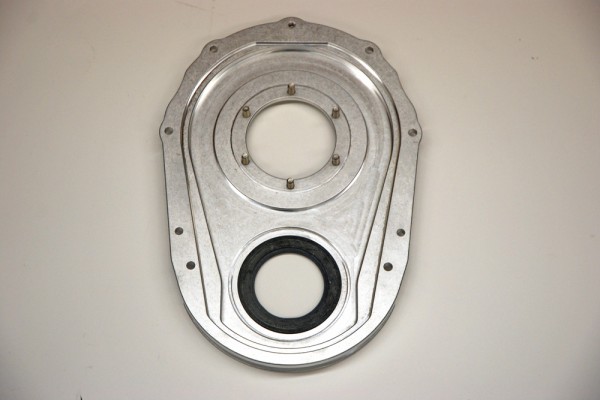 The complete belt drive kit includes a cam adapter, top pulley retainer and pulley, round tooth timing belt, cam thrust shim kit, cam and crank seals, crank pulley, cam pulley, timing chain valley cover and all related hardware. This particular kit is designed for a standard cam location, Gen VI big block Chevy (which, by the way, was something we built to run on the street). Because of the standard cam location, no idler system is required (see the text for more info on idler pulleys).

The kit includes this aluminum timing chain valley cover. Basically, the cover seals off the original timing chain area in the cylinder block, which in turn, allows the belt drive to run "dry". This arrangement seals the front of the cylinder block from the oiling system. Improved oil drain back to the pan is one benefit, and another is the elimination of any power loss attributed to driving the camshaft in a pool of lubricant. As you can see, there is a provision in the cast cover to allow for the cam stub shaft and the crankshaft to protrude (both incorporate oil seals).

This piece is the camshaft adapter. The purpose is simple. It mates the snout of the camshaft to the top belt pulley. You'll note that it's keyed and machined with a taper so that the spider fits tightly. The adapter physically bolts to the camshaft snout, and has a provision for the cam drive pin. Jesel supplies a special spanner wrench (shown to the left of the cam adapter) that allows you to hold the cam in place while torquing the camshaft adapter bolts.

The camshaft thrust plate installs directly to the studs on the timing chain valley cover. Between the thrust plate and the valley cover are a pair of thrust shims (shown on the right). Jesel recommends that the camshaft endplay be adjusted to between 0.010-inch and 0.015-inch (adjustment is obtained by removing or installing shims).

The crank pulley is installed by way of this billet aluminum driver. It's installed on the crank in the normal fashion (with a mallet over the driver). You'll note that the driver fits inside the lower belt pulley. Jesel recommends that the seal surface remain dry during the installation.

This is what is called a "spider". As you can see, the design is such that it fits inside the upper belt drive pulley (on the four studs). The spider is keyed, which in turn, allows it to fit over the cam adapter. In this close up photo, you can see that the upper pulley is indexed, and of course, degreed for camshaft adjustment.

You can advance or retard the cam by 10 degrees. And in case you forget which way is advanced and which way is retarded, they've machined an "A" and an "R" next to the degree marks (!).

Not that long ago, you had two choices when it came to driving a camshaft: timing chain or gear drive. While timing chains and gear drives are still in use today, they have been pretty much been eclipsed by belt drives in hardcore racing competition. Within drag racing, for example, they see use in everything from Super Stockers to Pro Stockers.

So why have belt drives become so common in motorsports?

It was no secret to racers many years ago that a tremendous amount of harmonics, vibration, and resonance was transmitted to the camshaft by way of the crankshaft. Obviously, this vibration, and the associated harmonics that went with it, had a serious effect on both valve and ignition timing. At the time, the issue was so bad that engine builders were having difficulty maintaining stable engine timing. And gear drives often made things worse because a gear drive physically ties the cam to the crank in a rather rigid fashion. The camshaft simultaneously witnessed every creak and groan witnessed by the crankshaft.

You may ask: “Doesn’t a harmonic damper fix some or all of this ‘noise’ transmitted to the valve train?”  Not exactly. Plus, the damper is outboard of the lower cam or gear drive gear, so the cam drive is still forced to deal with a bunch of harmonics.

The initial race engine builder solution (championed by the late Bill Jenkins, no less) was to use a timing chain set with a nylon upper gear (this was pretty much a standard Chevy production line piece). It solved the problem, at least to a degree, but these nylon gears weren’t exactly known for being robust. As a result, maintenance was often heavy, and you usually had to replace both the gears and the chain on a regular basis. And you could never determine exactly when the nylon gear would decide to take a vacation, so the results were sometimes catastrophic (and sometimes spectacular).

During that era, Dan Jesel was knee-deep in high rpm, small displacement Chevy drag race engines builds. While messing with a pair of OHC Cosworth Vega cylinder heads (mounted on a small block Chevy, no less), Dan more or less discovered the benefits of belt drives. A break-in at Jesel’s shop cut the Cosworth project short, but the notion of driving camshafts by way of a belt stuck.

“What if you drove the standard Chevy cam with a belt instead of a chain?” That question had to be answered, so Jesel created a prototype belt drive. This prototype consumed a wee bit less power to drive than a chain while allowing for much more stable cam and ignition timing.

Jesel’s belt drive invention has evolved over the years, but the general concept remains much the same. The back (block side) of the belt drive system makes use of a cast aluminum plate to seal the block. This allows the belt to run dry, but at the same time, it also allows for normal oil drain back to the pan. Since there is no chain whipping around in a puddle of oil, there’s no power loss. On the nose of the cam, there is a provision for the cam drive stub to poke through (complete with a sealing arrangement). Downstairs, the crank snout is sealed in much the same manner as a conventional timing chain cover.

Although they were first engineered for the small block Chevy, Jesel currently manufactures belt drives for many different engine combinations. For example, Summit Racing has 60 or so of them, including kits for engine blocks with raised camshaft locations. Several of the belt drive kits mandate longer belts, which in turn work with tension idlers (there is no need for an idler on combinations such as standard cam location small block Chevys or standard cam location big blocks). All of these belt drive systems share similar properties, including a 25 mm wide, round tooth or “high torque” belt that is built specifically for Jesel. The round tooth configuration was picked because it does a better job than other profiles when it comes to distributing a load across the tooth.

So what about power?

When Jesel developed the system several decades ago, some skeptics figured there wouldn’t be much power gain. However, initial testing on a (then state-of-the-art) 600-horsepower, aluminum rod, multiple carburetor engine (a typical small block Chevy Modified Eliminator combination from the era) showed gains of 12-14 horsepower. Independent back-to-back tests on a Super Stock-style small block saw gains of 17 horsepower when compared to a conventional chain drive. These gains were attributed to three probable factors: Increased timing accuracy, a lack of wasted motion (timing chains of the era were known for their chordal action which can actually whip the chain into a “S” at high speed), and reduced windage.

Belt drives offer many other benefits, too. Cam phasing and quick and easy via the four nuts on the cam drive (spider). Simply turn the crank clockwise to retard the cam; turn the crank counter-clockwise to advance the cam. Once you’ve re-set the cam timing, simply re-tighten the nuts on the spider and you’re done. Jesel’s removable thrust plate setup allows for simple endplay adjustment as well as cam removal through the cover. This design also helps make cam swaps much simpler.

In endurance racing, a belt drive has proven to offer greater reliability than both gear drives and chain drives. Remember, too, there are literally tens of thousands of Harley-Davidson (and other) motorcycles covering big miles every year. And each and every one of those big motorcycles is equipped with a drive belt rather than a chain.

Installation is fairly simple for a belt drive system, too. We’ll provide some additional insight into the actual components in the accompanying photos.

4 responses to “Valvetrain Harmony: The Hows and Whys of Jesel’s Belt Drive System”