Fired Up: Enhancing Power and Throttle Response with an MSD Distributor/Plug Wire Upgrade MSD makes a high-end, high-performance distributor for almost every modern engine still in use. Using a Chevy V8—arguably the most popular conversion engine in use today—as the example, we pulled the OEM distributor and installed an MSD unit with selectable vacuum advance to show you how it’s done.

We swapped his particular engine into our Jeep off-roader, and it developed quite a history of overheating and pinging under high-rpm loads. We went back to a mechanical, high-flow fan and custom-made radiator fan shroud, which pretty much cured the high-speed heating problem, but the engine was still pinging on long freeway hill climbs. Because it didn’t ping around town or on the trails, we decided that the OEM distributor—even though it was timed correctly at idle—was advancing the ignition too far at higher rpm on the freeways.

The OEM General Motors distributor does not have a selectable vacuum advance degree, whereas the MSD distributor does. And we included MSD ignition cables to avoid future problems with the old OEM spark plug wires.

Known as the Street Fire HEI (high energy ignition) distributor, its components offer a quality designed product that also has a one year warranty. Knowing the importance of a centrifugal advance in a distributor, we wanted the Street Fire because it has an advance assembly with coated weights and welded weight pins (not just pressed in like other models). Plus the Street Fire has the same drive gear that is used on MSD’s Pro-Billet models. The metallurgy of this gear has been refined for years to perform through the harshest conditions.

Inside the distributor, the ignition module and coil work together to produce a high-energy spark to light the fuel mixture. The high voltage is transferred through a new rotor to the brass terminals of the distributor’s cap and out to the plugs. The Street Fire distributor has an adjustable vacuum advance that helps tune it to each individual engine, with a mechanical and selectable advance up to 21 degrees.

As mentioned earlier, we included an MSD 8.5mm Super Conductor wire set, which has a special helically wound core that has just 40-50 ohms of resistance per foot—but with an RFI suppression equal to a 1,500-ohm wire. In fact, each foot of finished wire features 40 feet of tightly wound copper for superior conductivity. A tough, 8.5mm synthetic/silicone jacket over an extra-heavy glass braid and dielectric insulator keeps the current guided to the plugs. Underneath the high-temperature boots, dual crimp stainless steel terminals feature snap-locks to ensure a secure fit. MSD’s 8.5mm Super Conductor wire sets come available in custom or universal-fit applications.

Follow along in the slide show below to see how the Street Fire distributor installs into a Chevy V8. 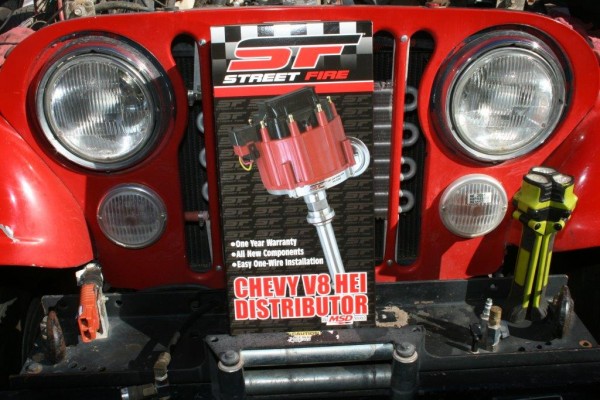 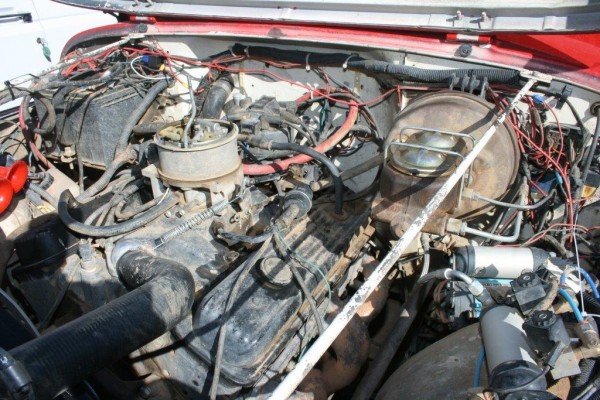 The MSD box shows the Street Fire and its highlights.

First step is to remove the air cleaner to clear the way to the Chevy’s rear-mounted OEM distributor.

A remote starter switch eases the chore of lining up the #1 cylinder.

Watch the timing marks on the crankcase pulley while quickly pressing the remote switch on and off.

Stop bumping the starter when the white line aligns with the timing gauge.

Unscrew and lift off the cap to make sure the rotor is pointing in the proper direction, which is for cylinder #1.

The rotor should be pointing in this direction on a Chevy V8.

It takes a special tool or a long time to loosen and remove the distributor’s securing bolt.

Prep the new SF distributor before installation by first removing the cap.

With the cap removed, you’ll also have to remove the rotor.

Checking to make sure the centrifugal advance components operate properly.

For the optional spring kit to be installed, remove this screw and carefully set it aside.

This is the spring kit. It can be installed in four different positions depending on what maximum advance you want. The instructions include a diagram showing you how to position it properly.

Slide the mounting screw through kit and place it in the distributor.

This is how the kit should be mounted for an 8 to 11 degrees of advance (note the letters stamped into its surface).

The SF distributor is now ready for its rotor and cap to be reinstalled.

Tighten the two screws holding the rotor in place.

Apply the break-in gear lube liberally prior to the installation.

Carefully position the distributor’s shaft through its hole in the intake manifold, making sure its gasket is correctly located. Carefully mate the drive gear with its matching gear on the camshaft.

Once the distributor is seated, position the clamp and its bolt. Thread the bolt in but do not tighten at this time. After making sure the rotor is properly aligned, tighten the clamp.

Install the cap. Do not over tighten the cap’s screws or you might crack it.

The MSD cables in the kit we used were not precut. The distributor side connectors were mounted at the factory, but not the spark plug connectors.

Once each of the eight wires’ lengths are determined, cut them.

To install the terminal, place the cable in the provided cutting guide.

Due to the size of the 8.5mm spiral wound conductor, it is important to use care not to cut into the conductor. Hold a sharp blade on the sheath and slowly rotate the cable in the mini-stripper.

Place the internal terminal on the prepared cable and carefully partially crimp it with needle nose pliers.

Next, place the assembly in the provided MSD crimper.

Using a bench-mounted vise and the crimper, crimp the terminal onto the cable.

Use a small amount of lubricant on the terminal to ease sliding on the insulating cap.

The insulating cap is very stiff and you’ll need some pliers to hold the cable while sliding on the cap.

The distributor and all the spark plug cables are in place. All we have to do now is re-install the air cleaner and fire up the engine.

2 responses to “Fired Up: Enhancing Power and Throttle Response with an MSD Distributor/Plug Wire Upgrade”