Ignition Basics: Analog vs. Digital Circuitry and What it Means When the average hot rodder ponders a new ignition system, it’s not unusual to migrate toward the most common or publicized brands. While it’s understandable to focus on familiar brand names, there are more choices out there than you think.

One of those lesser known options is Crane Cams.  Believe it or not, the cam experts at Crane have also been building high quality ignition components for over 20 years. When you look at the overall spark control boxes Crane offers, they all look pretty much the same. Most are housed inside a finned aluminum shell to dissipate heat and feature a set of easily adjusted rotary switches. And most of the boxes incorporate “digital” technology.

What is digital technology and what does it mean for your ignition box? First, let’s take a look at the differences between analog and digital circuits—starting with the technical definitions (according to an electronics dictionary):

Analog Circuit: This is a circuit in which the output voltage and current values are considered significant over a continuum. Analog circuits may be used for such purposes as amplifying signals.

Digital Circuit: This is a circuit in which the output currents or voltages are interpreted as having one of several (often two) values, depending on which of a corresponding number of ranges they fall into. Such circuits implement logical operations or operations on representations of discrete numbers, often in binary form.

Consider this: When you look at a computer, you’ll find that it’s a device capable of performing a series of arithmetic or logical operations. A computer is distinguished from an adding machine (a good example is a simple hand held electronic calculator or even an ancient abacus) by being able to store a computer program. This program allows it to repeat operations, make “logical” decisions, and store and retrieve data without intervention from you.

Technically speaking, computers are classified as analog or digital.

On the other hand, a digital computer (such as today’s common PC or laptop models) performs operations on what is called “discrete data.” Inside a digital computer, data is expressed in binary notation (or “numeration”).  Essentially, this is a series of on-off conditions that represent the digits 1 and 0.  A series of eight consecutive binary digits, or bits, is called a byte and allows 256 on-off combinations. Each byte can represent one of up to 256 alphanumeric characters. Mathematics and comparative operations can be performed on data represented in this way and the result stored for later use. Digital computers are used for things like desktop publishing, electronic games, scientific research, data processing and now, racecar ignition systems.

If you’re not into computers, you may have developed a headache by reading all that.

While you swallow your aspirin, we’ll give you another, less complicated way to look at the differences between digital and analog. Simply compare a good old-fashioned wristwatch with a sweep second hand and the LCD readout on something like your old VCR (remember the clock that kept blinking 12:00?). Both display time, but the wristwatch is constantly varying. As the second hand sweeps around the face of the wristwatch, the information that is displayed is constantly changing.

An analog system is like that old wristwatch in that it attempts to recreate the information as it actually happens. In contrast to the watch, the clock on your old VCR presents the same information but it’s in what’s called a “discrete demonstration.” In other words, it displays one piece of information at a time, taking the information and representing it as a series of changes, or “bits,” that are represented in code by zeros and ones. How does this translate to ignition systems?

A digital ignition system offers a number of advantages. It makes decisions based upon cold hard facts. If it receives a signal to do something, it does so immediately, so speed and accuracy are among the benefits offered by today’s sophisticated digital ignition systems. The bottom line: digital ignitions often deliver quicker, powerful, and more accurate spark at just at the right time. And it can repeat this process time and time again without compromise, so you get accurate spark over a broad rpm range without over-revving. Check out the slideshow below to see how Crane Cams incorporates digital circuitry into two of its more popular ignition boxes: the HI-6RC and HI-6DSR. 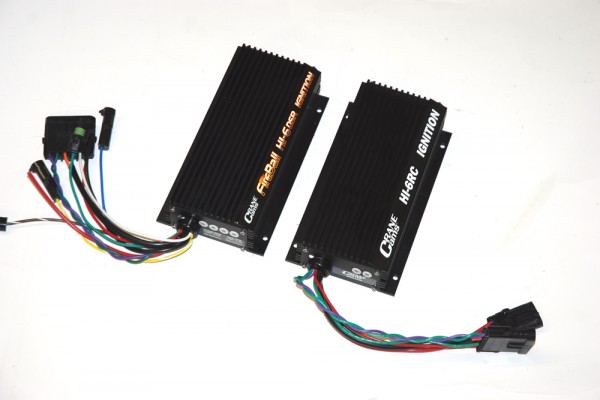 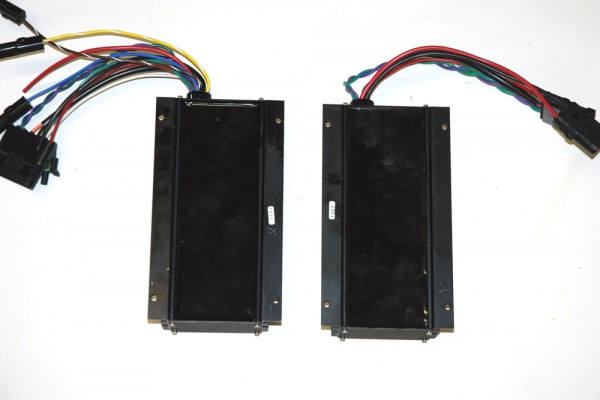 Both Crane ignition boxes look similar – both are wrapped in black anodized, finned aluminum covers. Both have the wiring harness assemblies coming out of one end and in the second photo, you can see the potting. As pointed out in the text, the idea for the finned covers is to provide a cooling effect (heat sink) for the internal electronics.

Meanwhile, the potting is in place to protect the electronics from vibration, moisture and dirt.

Wiring harnesses for either box are (for the most part), pre-terminated and set up for high end Weatherpack connectors. Weatherpacks provide good protection against vibration and moisture, plus they’re relatively easy to use.

The Crane HI-6RC is a budget friendly digital ignition box that works for eight cylinder applications. The ignition box is of the multi-spark configuration. It comes equipped with an adjustable single stage rev limiter that can be set anywhere from 900-9,000 RPM in 100-RPM increments. The settings are accurate to within 30 RPM. The limiter is a sequential type, which means it is soft on the motor, no loud popping or banging at high RPM, which can potentially damaging the engine. Crane also points out that when you wire the box to the start button or switch, you’ll get a timing retard, which, by the way makes for a happy starter. The retard is 20-degrees and once the engine fires, it then goes back to full advance.

The HI-6DSR is a step up from the HI-6RC and is great for high compression, force-fed, or nitrous engines. It incorporates two sets of dials (four switches) to allow for a maximum RPM rev limit along with a stage rev limit. This means you can engage the line lock or transbrake and automatically set the low side. Then the ignition box reverts to the high side until the line loc or transbrake is engaged again. Crane offers an optional control module that allows you to adjust the timing retard in the car. Both Crane systems can be triggered by points, a magnetic pickup, or fired by a computer module.

While we didn’t mention it in the text, Crane’s PS92N coil is the right piece for these digital CD boxes. A step up from canister-type coils, the PS92N is based upon a high output E-core configuration that’s well suited for racing or street use. They deliver 70-100% more spark energy than stock or other aftermarket coils. The E-core design incorporates a closed magnetic path that reduces leakage and improves energy transfer. Crane notes the coil features a lightweight aluminum bracket along with an exposed core for cooling and is safe for harsh vibrations and high-energy breakdown. Note too that the mount is designed with finned aluminum on each side. The idea here is to dissipate heat (and yes, coils can get hot in a hurry).

2 responses to “Ignition Basics: Analog vs. Digital Circuitry and What it Means”