Operation Appreciation 2013 (Day 2): Line Rolls with the Rain, Looks Forward to the Next Stops 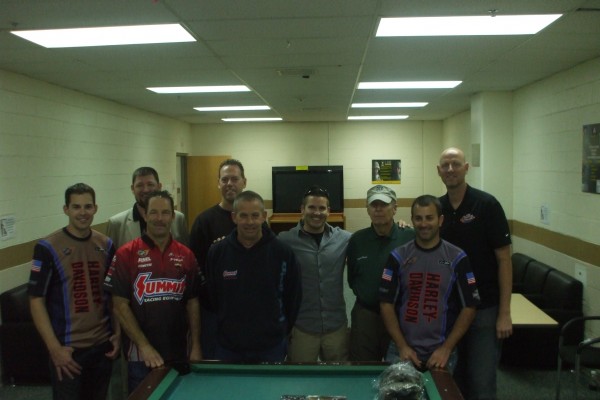 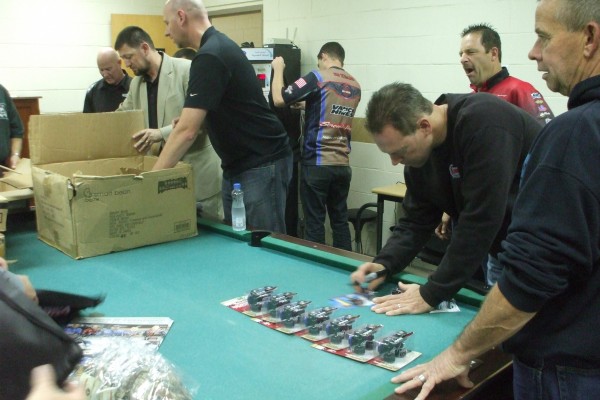 Operation Appreciation tour members pose with Steve Knight (fourth from right), a member of the Triple Canopy PSD security detail, which escorted the group in Kuwait.

And the last place someone like Jason Line expected to encounter a driving rainstorm was the deserts of the Middle East. Yet that’s exactly what Jason and the Operation Appreciation contingent got in Kuwait Monday night and Tuesday in massive (dare we say, biblical) proportions. By some accounts, the region was being hit with its biggest storm in decades—enough to put Camp Arifjan on complete lockdown to deal with the massive flooding.

Unfortunately, there weren’t enough track dryers to make all the water go away this time. The day’s planned activities, which included a visit to Camp Patriot and a meet-and-greet back at Camp Arifjan, were completely washed out as the camp’s military personnel cleaned up from the storm.

Jason Line has been on six NHRA troop visits and has never witnessed anything like it. He shared his thoughts on the unusual circumstances—and his excitement to continue the mission of the tour:

I think this is my sixth time on the trip, and Greg’s third time, and Andrew and Eddie’s second time.  It seems like a really small—I don’t really want to call it a sacrifice—but I guess it’s a sacrifice in that we don’t really have a lot time at home. So it’s a small sacrifice for us to make by not spending some time at home with our families. But when you think of the sacrifice all the soldiers make and the amount of time they have to be away from home, what we do is nothing. So really, it seems like a tiny thing to do to be able to give back. And I enjoy it—other than losing to Jim Greenleaf (Summit Racing Motorsports and Events Manager–Ed.) in racquetball, it’s been a lot of fun.

Losing to him is just humiliating!

This is also my second time here. We spent way more time inside buildings last time, so we’ve seen a lot more of the land and landscape this time around–at least before the rain. Unfortunately, today’s one of those days that we all deal with—but especially if you’re in the military. You have to learn to roll with it. It’s obviously a strange situation, and it sort of put a damper on the day. We wanted to meet and greet more folks than we did today, but it was nice that a couple guys went out of their way to find us during the day. You can definitely tell the hardcore fans. They know what’s going on, and they like to bust your chops about what you did or didn’t do right throughout the year.  It’s a lot fun because it makes for good conversation, and that’s why we came here.

There’s no telling what the weather is going to do tomorrow, but hopefully we can get out of here on time, get to our next place, and keep on our scheduled mission of meeting with as many troops as possible.

Well as the sun sets over the base we really couldn't do much today. Bad rain last night flooded everything pic.twitter.com/mgvLixBfpS

2 responses to “Operation Appreciation 2013 (Day 2): Line Rolls with the Rain, Looks Forward to the Next Stops”