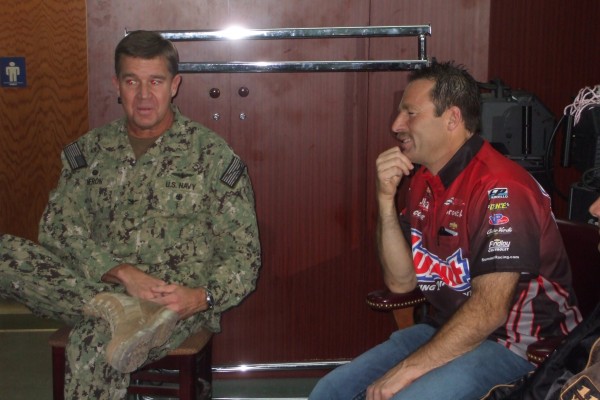 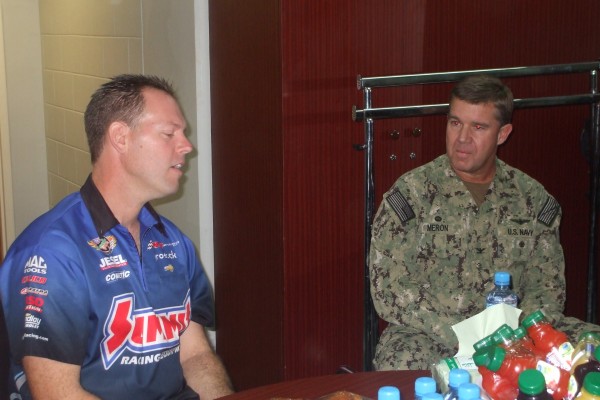 NSA Bahrain was the first base on the Operation Appreciation 2013 tour to accommodate entire military families. Here, Dan Runte autographs a Summit Racing/BIGFOOT die-cast monster truck for an admirer.

Andrew Hines and Eddie Krawiec share a laugh with a young fan at NSA Bahrain.

BAHRAIN — Captain David Meron is in charge of the Naval Support Activity (NSA) in Bahrain.

He is ultimately responsible for more than a dozen boats, 17 military working dogs, and hundreds of enlisted men. Yet, all he wanted to talk about on Thursday was drag racing and his unfinished bracket car back in Oklahoma.

Captain Meron and his Naval base hosted the Operation Appreciation tour on Thursday, and Meron couldn’t be more excited about it. A native of St. Paul, MN, Captain Meron was more than happy to spend one-on-one time with the group, talking with fellow-Minnesotans Greg Anderson and Jason Line about things like cam swaps and optimal engine firing order.

He wasn’t the only one.

The U.S. military is full of gearheads and drag racers, and they turned out in full force at today’s meet-and-greet with the Operation Appreciation contingent. From the soldier whose father raised him on racing at Rockingham to the sailor whose dad was chaplain in the Racers for Christ organization, servicemen with racing in their blood are very common.

Here is Greg Anderson’s take on the trip so far:

We had a lot of rain dates at NHRA events this year and then we come here—three desert countries that never see rain—and all three countries we visited flooded while we were here. I’ve come to the conclusion that it’s our fault. Now we know why we had rain dates at national events this year, and I apologize to NHRA. Obviously, it was something that Jason or I or Andrew and Eddie did, because we made floods in the desert in three separate countries.

In all seriousness, it’s just been awesome this year. Today, we went to a Navy base in Bahrain and we met the captain there, and he is absolutely a die-hard drag racer—as die-hard as we are. He told us about a project car he started four years ago, and he can’t wait to get to the race track with this new engine he built for the car. And then suddenly he gets deployed for four years. We made a promise to him that if he doesn’t get back to the states in the next few months, we will go to Oklahoma and get that thing up and running for him, because he’s worried that it’s been sitting too long now and won’t want to run.

Yesterday at (the 380th Air Expeditionary Wing) was also a highlight for me. We toured the base there and saw all the cool toys. We even got to drive a MAT-V! We drive a Pro Stock car with 1,500 horsepower on a quarter-mile track at 200 miles-per-hour, and we think it’s treacherous. And then you get into a vehicle like that, and you want to beat your chest like King Kong. It’s one of the baddest things you can ever imagine, and I never even knew it existed. It makes a Pro Stock car look like a Hot Wheels car!

You’re just surrounded by amazing stories here. When you go to these places, you just can’t believe how appreciative the soldiers are from the top on down. And we feel just the opposite. We can’t thank them enough for the sacrifices they’ve made for us. They allow us to stay home with our modern conveniences, and you realize how spoiled we are. They are the true heroes.

When you come here, you hope that somehow, some way you can help brighten these guys’ day. Then you go there and realize you don’t have to do anything special, because many of these guys are gearheads. They love to watch what we do and would love to do what we do. They still have hopes and dreams that when they come back, they can race their cars. They want to do the things we get to do every day.

We’re already planning out what we can do next year to hopefully impact even more soldiers.