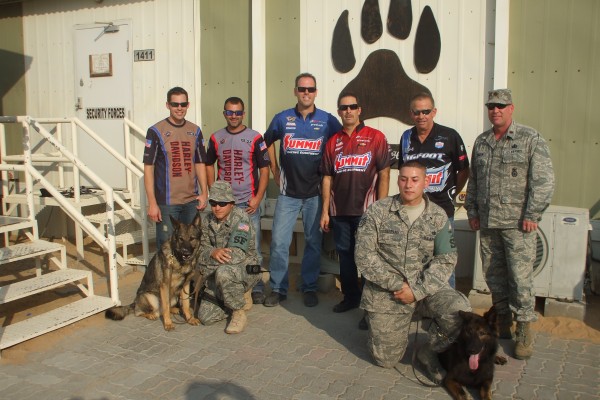 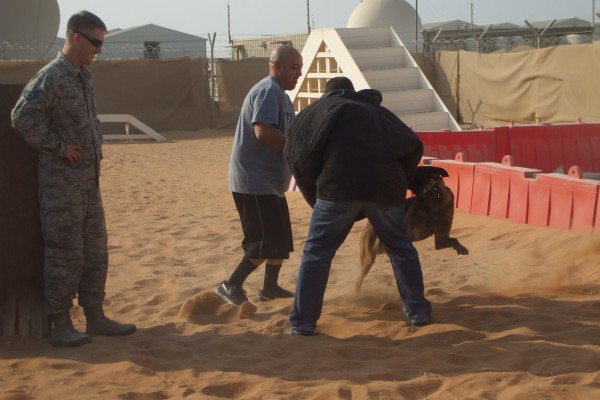 The team poses with the 380th Expeditionary Security Forces Squadron military working dogs team. Members of Operation Appreciation got a demonstration of how the dogs identify and help subdue potential threats.

Eddie Krawiec participates in a display by the 380th AEW ESFS military working dog team. Here, one of the team's K-9s, Gary, attacks and subdues Krawiec after identifying him as a potential threat.

Captain Ed Salazar talks to the team about some of the 380th Expeditionary Air Wing's latest projects and on-going duties.

The team listens to a member of the 380th AEW in Southwest Asia.

Andrew Hines gets a closer look at the cockpit of an AEW project sitting in one of the unit's hangars.

Tech Sergeant Amanda White fills in the team about the ins and outs of prepping a pilot for flight at 70,000-plus feet. The demonstration took place at the 380th Air Expeditionary Wing's Physiological Support area.

Greg Anderson speaks to the crowd at an outdoor community center in Southwest Asia.

Greg Anderson signs an autograph for a fan.

The Operation Appreciation team at the outdoor community center at the 380th Air Expeditionary Wing in Southwest Asia.

Greg Anderson climbs behind the wheel of an Air Force M-ATV vehicle in Southwestern Asia.

Eddie Krawiec gets ready to take a M-ATV for a spin.

SOUTHWEST ASIA — After the cool, rainy conditions in Kuwait, Operation Appreciation headed to Southwest Asia and found warm weather—and an even warmer reception.

The group visited the 380th Air Expeditionary Wing in Southwest Asia on Wednesday. They were attacked by dogs from the Expeditionary Security Forces Squadron’s (ESFS) military working dog (MWD) team, got to drive M-ATVs, and checked out some of the base’s aircraft. And when it was all said and done, Andrew Hines shared these thoughts on the experience:

We left Kuwiat today, and after seeing the devastation caused by the 30-year flood and seeing what they’re going through over the next period of time, it’s pretty devastating for them. They have a lot of work in front of them. But where we are now-—with Afghanistan and the possibilities of Syria—it makes you realize what our troops could ultimately be up against.

This is my second time on this tour,  but obviously Armed Forces Entertainment (AFE) wants to do the best for our troops out there. They have really stepped up their game. We were hoping to go to more “front line” bases, and at Kuwait, you had to have a security team the whole time. AFE obviously sees the value of having a morale booster at some of our more higher-risk areas and we were very happy to be here.

We came here today to boost morale, but it seems like their morale is already up. There are a lot of first-time deployments (at the 380th Air Expeditionary Wing) and to see the looks on their faces, you can tell they are not nervous. They are ready to go out and do their job for the United States. That makes me feel really comfortable as an American to see what they’re doing for us over here. They’re doing a great job!

We’ve had a great experience with the interaction we had at the community center here, and we found a lot of people are fans of racing. They knew exactly what we’ve been doing—how fast Pro Stock cars and Pro Stock motorcycles go. To see that we have an NHRA following like that is big. And I think being able to interact with these guys where they work every single day is special to them too. We got to go with the Explosive Ordinance Disposal Team, drive M-ATVs and diesel trucks, and even crawl around the U2 spy planes. To see the flight deck of those planes is pretty awe-inspiring! You can see that the U.S. is about maintaining good relations with foreign countries.

You’ve also got guys on the front lines with their K-9 units, trying to find all the stuff that’s dangerous to our troops in front of them. Today, we got an up-close display of the K-9 unit, and we even got to put on jackets and get bit by the dogs. I’ve been a dog lover my whole life, and I’ve always wanted to see that!

Our welcome here has been overwhelming. Seeing some of the stuff around the base here, it really hits home. It’s tough for these guys around the holidays. There are a lot of first-time deployments but also fourth- and fifth-time deployments. Guys and girls are constantly missing the holidays. I just feel for them being here this week, and visiting with them a little bit is the least we can do.

The reason we were delayed at the airport. I guess that’s why it is called HUMP DAY. @SummitRacing @NHRA @NDragster pic.twitter.com/S6gHq6NFyC

3 responses to “Operation Appreciation 2013 (Day 3): Andrew Hines Happy to Be Closer to the Front Lines”