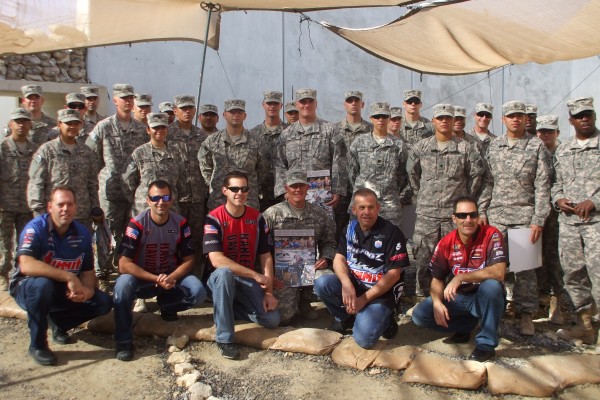 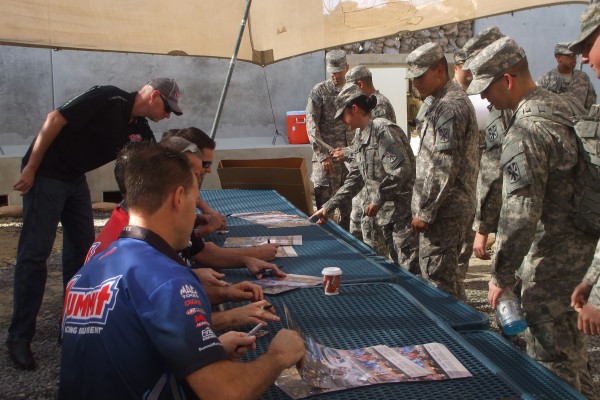 The guys pose with Army personnel at the PAT V missile site. Based at an undisclosed location in Southwest Asia, PAT V is home to Patriot missile launchers, which are tasked with shooting down incoming enemy missiles.

Troops load up equipment on to flatbed trailer at PAT V. Equipment and vehicles are always being swapped out to keep the fleet fresh.

The team poses with personnel in front of a missile launcher.

On Day 5, the team visited Isa Air Base in Bahrain. The team gets ready for its autograph session in the base's DFAC center.

Autograph session at Isa Air Base.

Autograph session at Isa Air Base.

Dan Runte signs a poster for a soldier at Isa Air Base. The base is home to all four wings of the U.S. Military.

Jason Line shakes hands with a soldier at Isa Air Base.

The team gets a visit and personal interview with Captain Jeff Hutchinson (center right), Commanding Officer at Isa Air Base.

SOUTHWEST ASIA AND BAHRAIN — Eddie Krawiec is the idea guy in the group:

“Hey, can we rent camels?

“Alright, can I hold that gun in this photo?

“Any chance we can fire off some test rockets?”

The answers to the questions were no, no, and hell no. But it never stopped Krawiec from asking the questions, even though they weren’t serious—not completely serious anyway. The Harley-Davidson/Screamin’ Eagle/Vance & Hance driver loves to have a good time, and he had a great time on Operation Appreciation 2013.

He offered the following assessment of day 5 of the tour, which ended with a trip to the island kingdom of Bahrain:

“I can’t talk about it… it’s highly classified,” Krawiec joked.

Upon further thought, he offered this summary of the day as well as the entire week.

One of the most exciting things is when you’ve got this guy that comes walking up to you—a sergeant or a general or some high-ranking officer—and he says: “Listen man, you can’t take any pictures. Or you can’t do this or that because it’s highly classified… but you can come over here and check it out… or you can look at it… or sit on it.”

I think that’s something that’s a memory, and it’s never going to leave you.

You definitely know when you’re rolling into a facility and you have to go through multiple barriers that there are some cool things in there. And then you see these rocket launchers that are capable of doing pretty much whatever they want. It’s just awesome!

Overall, it’s tough to summarize what you see and what goes on during the course of a week, let alone the time we’re not here. I’ve been doing this for two years now and my respect has grown greatly, everytime I come back here, for the troops and for what everybody does for us. It’s that out-of-sight, out-of-mind thing. When you’re at home with your family and your kids, you don’t think about it. You don’t think about the guys overseas—not just in the Middle East but around the world—sacrificing their lives, putting every thing they have out on the line when they have their own family at home.

What we’re doing is a small part of the appreciation side of it, but I think it goes a long way for some of the troops because it brings home to them. And when home comes to them, I think it’s one of those things that brings joy to them. As we come to the holidays, I think one of the most important things is morale and I think we’re able to help a little bit.

What I think is really cool is that you’re so far away from home and you have this common bond with people. They’re into motorsports. They’re gearheads. It doesn’t matter where you are, what country you’re from, or what you do—you always seem to have something in common. And I think that brings you closer together and gives you a mutual respect with each other. These guys are away two, three, four, five years—a lot of guys spend their lives in the military, and they don’t know what to do in their spare time. For them, their release is to open up the Summit catalog, order up these parts, go home and then get their car. In the end, that’s their pride and joy—that’s their baby. And I don’t think it’s changed, because you go back to the muscle car era of the 60s and 70s and a lot troops would leave, come back, and buy a muscle car. And you have that now. I can’t tell you how many kids I’ve talked to—kids in their early 20s or teens—that say I’m going to serve my four years, and when I get home I’m buying a Mustang or buying a Camaro. I’m going to hop it up.

A lot of these guys on bases ride Harleys too. It’s part of their American heritage that they bring with them. A lot of the bases sell Harleys and support it, so I think it’s great that we get to be involved. There’s nothing that screams American and patriotic more than the Harley-Davidson side of it, and Harley supports us 100-percent in the program.

It’s a passion, and its great we can help fuel their fire.

I’m honored to be a part of Operation Appreciation. It really has changed my whole outlook on life ever since I did it the first time last year. It has given me a great appreciation for what goes on and for what these troops do for us.

It has changed my whole perspective.

3 responses to “Operation Appreciation (Day 5): Krawiec Sums it Up Perfectly”