If two is a party, and three is a crowd, then four must be a rocking good time and the Polaris RZR XP 4 1000 is a concert on wheels.

Polaris took the 107-horsepower engine they placed in the RZR XP 1000, extended the frame, added two more seats, and only added 217 pounds. The RZR XP 4 1000 boosts the same automatic transmission and On-Demand True AWD/2WD that the two seat RZR XP 1000 has making it the fastest accelerating four-seat UTV on the market.  Polaris found a winning combination for horsepower and torque in the ProStar Twin EFI engine that features Dual Overhead Cams (DOHC) and dual throttle bodies, giving the seat of the pants dyno a major boost.

One improvement over the RZR XP 4 900 is the tubular frame and lower cab frame which lowers the center of gravity, but still gives the RZR XP 4 1000 over a foot of ground clearance.  The 16-position, single adjustable Walker Evans Needle Shocks have 16 inches of travel in the front and 18 inches of travel in the rear, allowing you to put all of that power to the ground and sail through some of the roughest terrain.

Polaris really made this a family vehicle by having the rear passenger door openings a little easier to get in and out, the seats hug the passengers for a secure feel, as well as touches like making the RZR 4 1000 easy to clean with front and back floor clean outs and LED floor lighting for safety. 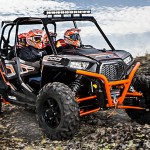 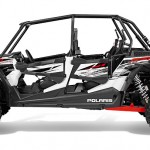 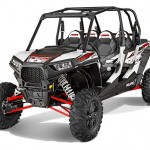 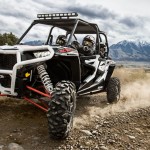 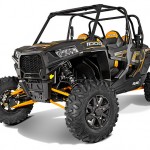 Of course other features include four wheel disc brakes, 14-inch aluminum wheels, and electric power steering. You can read more about the Polaris RZR XP 4 1000 on Polaris.com or hop over to PowerSports Place to outfit your current RZR or UTV with upgrades.

Video: How to Change the Tires on Your Dirt Bike

How a Stuck Carburetor Fuel Shutoff Float Valve Led to a Poor-Running Motorcycle (& How it Got Fixed!)

Video: Should You Run a Radial or Bias Ply Powersports Tire on Your Side by Side or ATV?