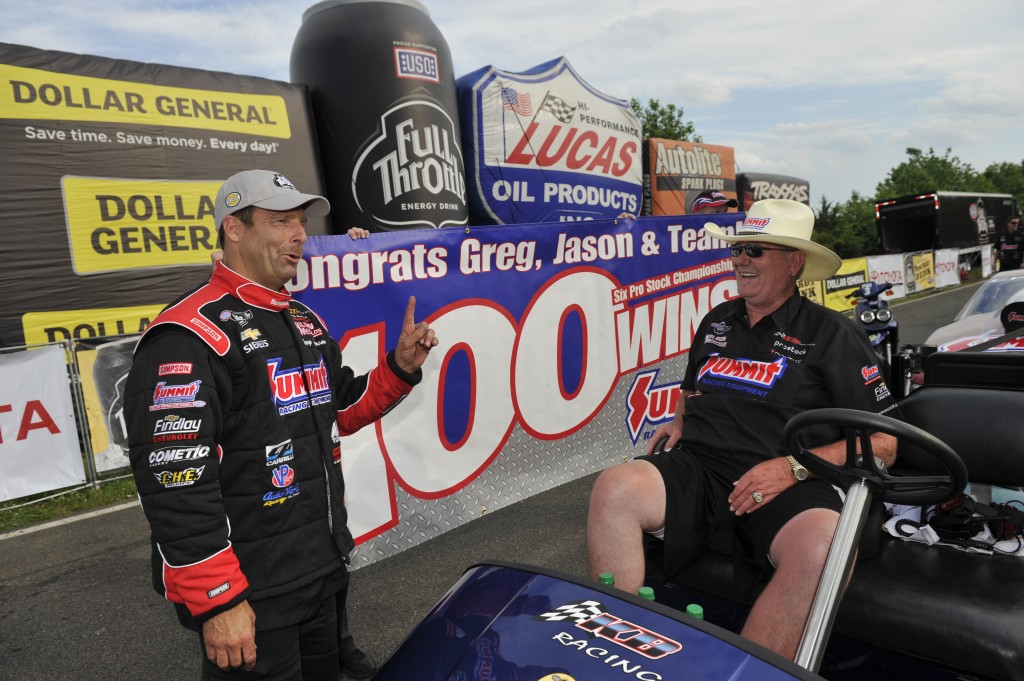 At the recently completed Toyota NHRA SuperNationals in Englishtown, NJ, the Summit/KB Racing team reached an important milestone, as Greg Anderson scored the organization’s 100th NHRA Pro Stock national event win. Making this achievement even more remarkable is that Anderson and teammate Jason Line were able to reach in the century mark only 10 years after the KB Racing team made its competitive debut at the 2002 Winternationals in Pomona, CA.

As the team prepared to continue their pursuit of the 2012 Full Throttle championship, the talented tandem took time to answer a few questions about their race team and the significance of the 100th win–and their quest for 101 at Summit Racing’s home track in Norwalk, OH.

GA: Any way you look at it, 100 wins in 10 years is an incredible accomplishment, and a testament to the hard work by everyone on this Summit Racing/KB Racing team. We have some people who have been here for all 100 wins, and others that are fairly new to the team, but each one of them has made a contribution to our success.

“Winning an NHRA national event is not an easy task, so for this team to score 100 wins in that short a period of time is just remarkable, and I’m proud to be a part of it. Greg, Jason, and the KB Racing team celebrate the team’s 100th after their victory in Englishtown.

JL: To be honest, at this juncture I’m not ready to sit back and say “look what we did,” because that is just not our style. Still, it’s very cool, especially because Ken and Judy were in Englishtown to see it. Obviously without them this group of very special folks that we have on this KB Racing team would not have been put together, so it was a big deal that they were there.

I don’t think anyone else has been able to do it in such a short period of time, which makes us the most successful two-car Pro Stock team ever assembled, which is very cool. It will be even cooler when I can look back and say I was part of it, and I’m very proud of all the folks that made it happen, because Greg and I are just the two knuckleheads that get to drive these cars. These 100 wins are a testament to what they do for us.

Q: Do you have a favorite or most memorable race?

GA: There have been so many special ones, with most of them being in front of Summit Racing and Ken Black, and when you have them both in attendance, it’s everything we could ask for. Still, there are just so many along the way it’s very hard to single one out.

But, if I had to choose, the one race that comes to mind was the Vegas race in the fall of 2010 where both Summit cars were able to race in the final in Ken’s first race back after his stroke. We were trying to win the championship, and a lot of people questioned why we would even race, but that’s not how we do things at KB Racing. We’ve never played any games, so we raced heads-up and I was fortunate enough to come out on top, which really helped wrap up the 2010 championship, and to do it with Ken Black and everyone from Summit Racing on hand was the icing on the cake.

Still, there is no such thing as a bad win, and I consider them all to be special, and hopefully we’ll have room for more special ones down the road.

JL: Obviously, out of 100 there are a lot of memorable ones, but I would have to go with Englishtown in 2003, where Greg had an absolutely dominant car, set both ends of the national record lowering the elapsed time five hundredths and bettering the top speed by two miles-perhour, qualified #1 and won the race. That one was way up there for sure.  Being as how I had just started at KB Racing, it left a really big impression on me.

Q: When this team was first put together ten years ago, did you ever envision it would become as successful as it has?

GA: No, I don’t even want to think about lying about that. Quite honestly, I’m usually a bit of a pessimist, and as a result I don’t set goals that I consider unrealistic, which at the time that we started this team, would have been to win 15 to 20 races in its existence.

I had worked for one of the best racers in the history of the class in Warren Johnson, who is still the all-time leader in Pro Stock wins, and when I left that team, I would have been locked up if I thought I could accomplish what he did, but here we are ten years down the road and some of those records that he set are actually within reach, which is pretty crazy.

We obviously have overachieved and gone well past those initial goals, to where we are now feeding off that success and wanting to win more, setting the bar higher each time.  But when we first started, we had no idea what to expect or what we were going to accomplish.

JL: I remember telling Greg back in 2003 that we weren’t going to quit until he passed Warren (Johnson) for the record. The truth is that at the time I probably had no idea what I was saying, but looking at it now, it certainly is not out of reach for him.  However, I always felt that we had a very special group of folks. Greg and Jason talk about their accomplishment following the Englishtown race.

Q: Winning an average of 10 races a year for ten years is quite an accomplishment, especially in Pro Stock–to what do you attribute this continued success?

GA: I think our success comes back to the four letter word ‘team’. We have been very fortunate to assemble a team that works together, thinks together, has the same goals and the work ethic to achieve them. There are a lot of teams who think you get to the top by having that one individual that’s better than the competition, while we believe in succeeding as a team.

When you have 10 people rowing the boat, there’s no way one person can out row them, no matter how strong he or she is. We have such a cohesive group here at KB Racing, giving us that total team effort that allows us to continually go forward.”

JL: The people. There’s no question about it–it’s always about the people. I know some of our competitors have accused us of having an unlimited budget, and it does take money, there’s no doubt about it, but you can have all the money in the world, but it doesn’t guarantee success. Still it all comes down to the people, and we are very fortunate to have some extremely talented folks on this team.

Q: What has been the biggest challenge over the last 10 years?

GA: I don’t know if there’s any one challenge that has been the biggest over the last 10 years, but over the last two or three it has been the economy. It’s been harder to operate at a high level without spending as much money as you once did. It’s certainly tough, but I’m not about to complain because it’s the same for everyone, whether they are racing or not.

What it has done for this KB Racing team is make us realize that we could work even harder. We thought we were working 110% before, but somehow you find a way to work 120%. We’re now able to do the same amount of work in eight hours with seven people that we did with 10. The neat part of it is that you get a greater sense of gratification and pride at the end of the day when you achieve something with a smaller group, because every person has more to do with that race car winning. It’s a tough deal without a doubt, but in some ways it feels better. JL: On one hand, dealing with success, which is a hard thing to handle at times. But the single biggest event that was the hardest to deal with would definitely be Ken’s stroke in 2009. We’re all relatively young and rarely think about death, but Ken was very close to that, and without question he is more than just a team owner to us–he is family, so it was a tough time for sure.

Q: What do you consider this team’s greatest accomplishment?

GA: I think our biggest accomplishment has been keeping the team completely focused and together for 10 years straight, something we hope to continue doing for the foreseeable future. We’ve been able to avoid any major issues or turmoil, as well as any off years, staying consistently strong for entire time.

We may not have won the championship every year, but we won six, and were fully capable of winning the other years as well. So, our biggest accomplishment has been to not let our guard down for 10 years, which is very hard for any team to say.

JL: Managing to keep this many good folks for this long. I would say that’s our biggest accomplishment.

GA: Well, obviously 101!  We can’t worry past the end of our noses, and 101 is there. We’re burning the midnight oil trying to get it done at the next event (NHRA Summit Racing Equipment Nationals). We don’t allow ourselves to think too far down the road, preferring instead to live for the next race, doing everything we can to win the next event we go to–that’s the plan.

JL: 101 of course!  It would be cool to see Greg pass Warren for the most wins. Obviously that’s still a long ways off with a lot of factors involved. The fact that WJ has won that many races is phenomenal–he’s a special guy, there’s no question, but records are made to be broken. It’s going to be a tough one, but I do think it’s a possibility.