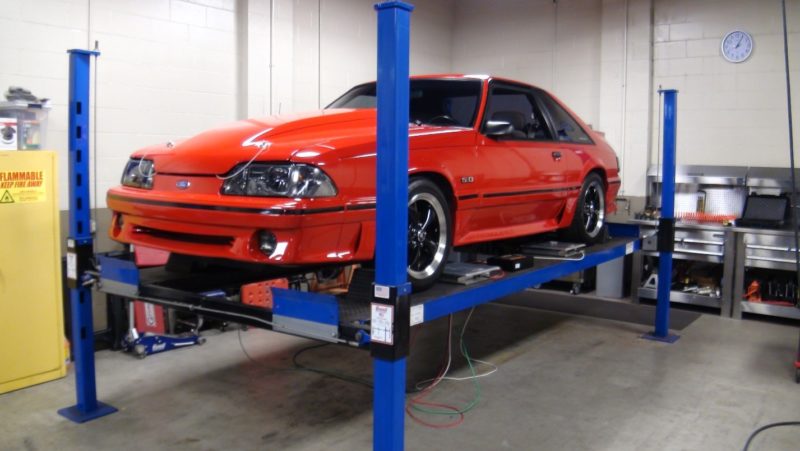 If you jump out of your old Mustang and into a newer one, the first thing you’ll notice is how much stiffer the chassis is.

The suspension can be tuned softer, yet they grip and corner flatter. New Mustangs also don’t squeak and rattle as much when the body shell isn’t twisting.

Most of us have gone through a corner and experienced that uneasy feeling of the chassis twisting and threatening to snap back mid-corner.

Many a Mustang convertible has swapped ends for just this reason. What’s worse? Jacking up one corner and being unable to open or close the doors. This is a sure sign that something needs to be done.

What’s the fix? In the past it’s been tried and true subframe connectors. These were fairly inexpensive and went a long way to stiffen the car up. 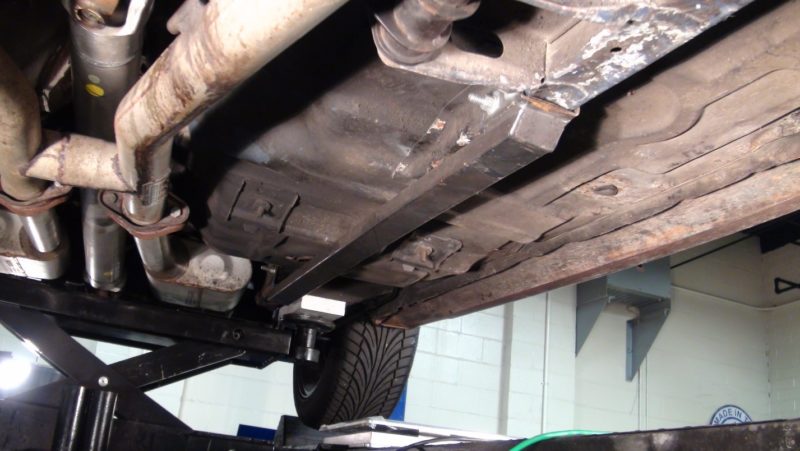 A better solution might be Summit Racing’s full-length Mustang frame connectors. They fit 1979-2004 Fox-body cars, which include the SN-95 Mustangs (1994-2004, which from 1999 on are commonly referred to as New Edge Mustangs). 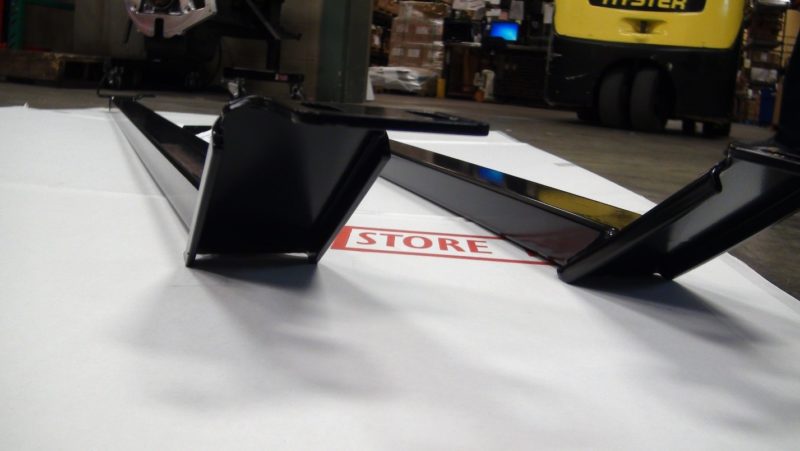 So why are they longer? Well, the front subframe bolts in and the rear lower control arms mount in the torque boxes. These connectors run ALL the way between the two.

So how does it improve the car? With the front and rear suspension loads directly acting upon each other, much of the forces are canceled out before it begins to twist the body shell. The result is a much stiffer chassis.

How were they developed? Summit Racing loves to test and making these Mustang subframe connectors was no different. It wasn’t hard to get Summit Racing associate Bryan Kuhn to hand over the keys to his beautiful 1988 Ford Mustang GT.

First, the car was put up on the rack and scaled at all four corners.

Kuhn’s Mustang is just as you remember them with the exception of its aluminum-headed mill that puts about 390 horsepower to the ground and had old-school subframe connectors. Total weight was 3,175 lbs. without driver—a light and refreshing number compared to modern muscle starting around 3,700 lbs. 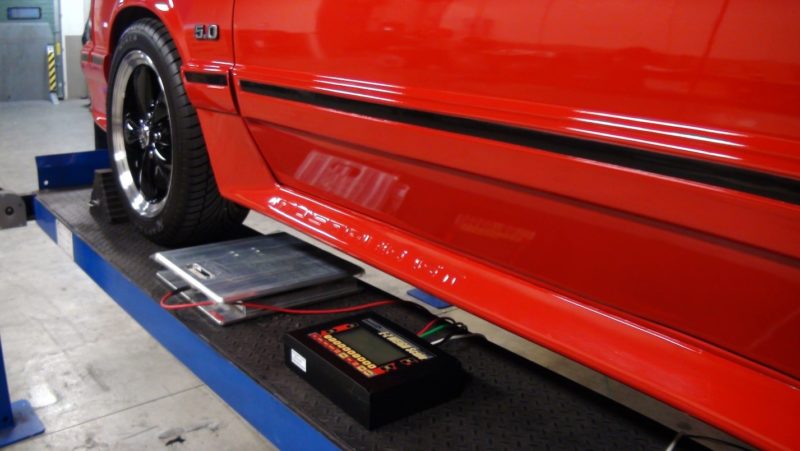 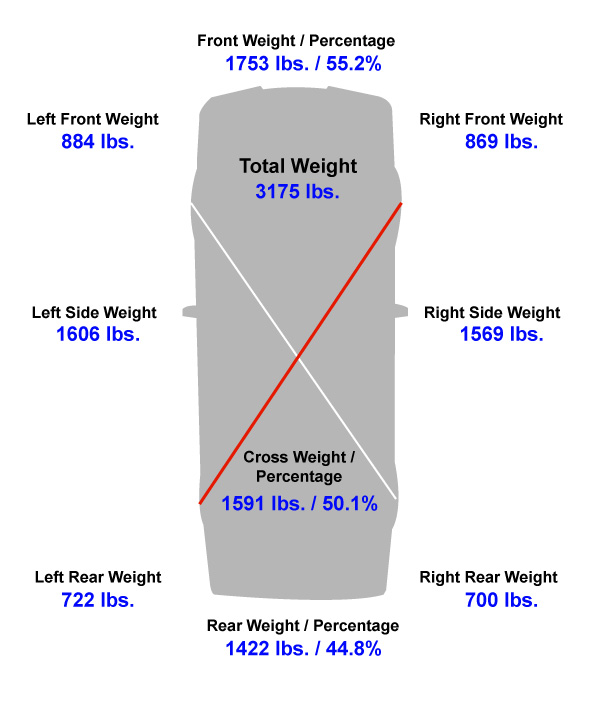 A test was devised to compare the car with no connectors, old style shorty connectors, and Summit’s new full length connectors. How can torsional and longitudinal twist be compared without a Cray super computer? It turns out four Intercomp scales and plenty of coffee go a long way.

In a perfect world, the rear brakes would be locked while the pinion gear was turned. It would climb the ring gear until the left front tire hung in the air and the right front hit zero on the scale. A static wheelie with 100 percent of the weight on the rear wheels. An inclinometer would measure twist. Lacking a lever long enough to do that, what was the next best option?

It was decided the driver’s side front control arm would be jacked up until the scale hit zero, then measure twist angle with an inclinometer.

Most importantly, how much weight was left on the front right tire? The stiffer the car, the lighter the weight would be. 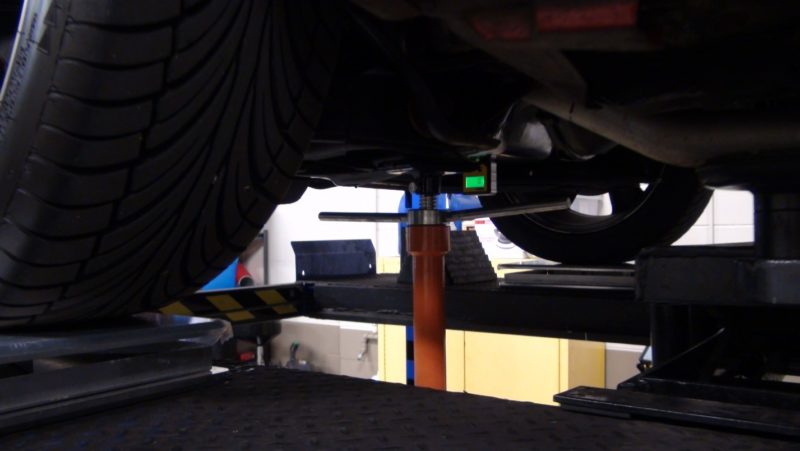 Test #1 with shorty subframe connectors resulted in 389 lbs. left on the right front. Next, the car was dropped down and relieved of its old connectors to see what it weighed with no connectors at all. Here are the results: 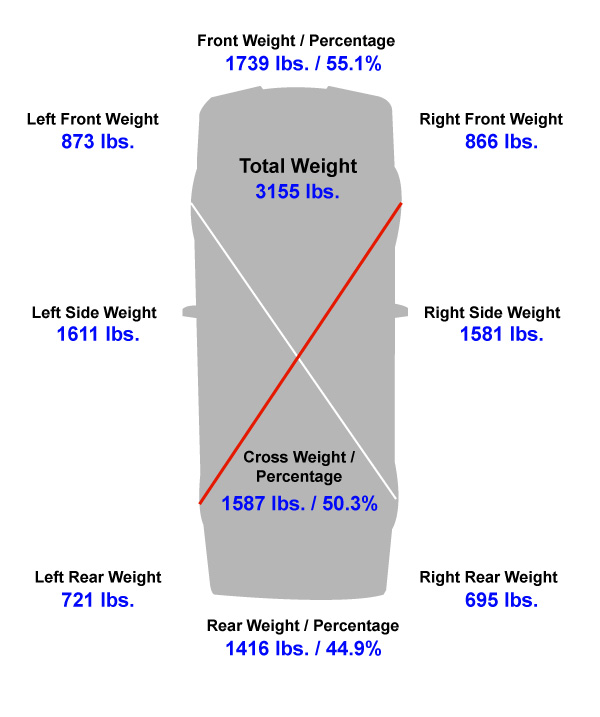 For Test #2, the connectors were removed and the car jacked again. The result? 382 lbs.

That would indicate the car was flexing less.

Weighing before and after showed passenger front weight was reduced about 3 lbs. when the connectors came off. It appears the original subframe connectors weren’t doing much to stiffen the car laterally. They would help longitudinally, but this couldn’t be measured in this test.

Next, the Summit Racing full length connectors were installed. 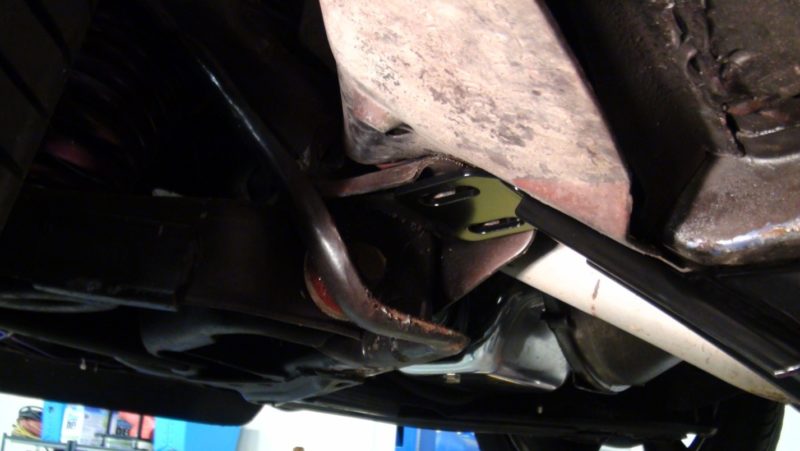 Check out the beefy backing plates and grade 8 fasteners. 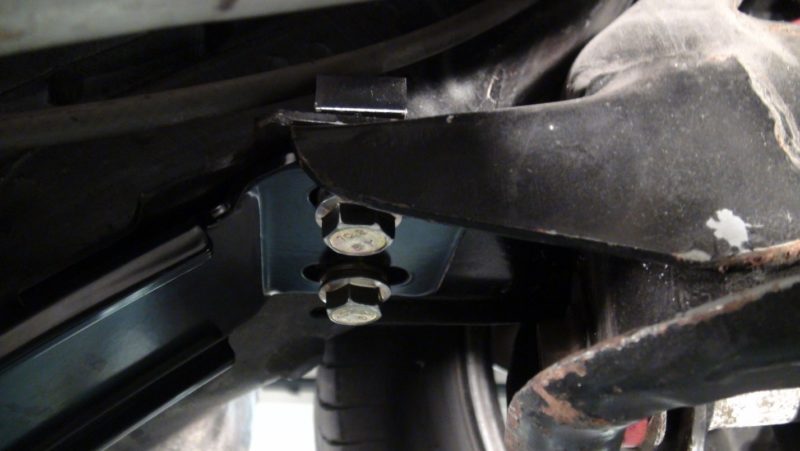 In the back, the Summit bars bolt directly to the torque box using the lower control arm mounting through-bolt. This increases strength dramatically and exactly where it’s needed. 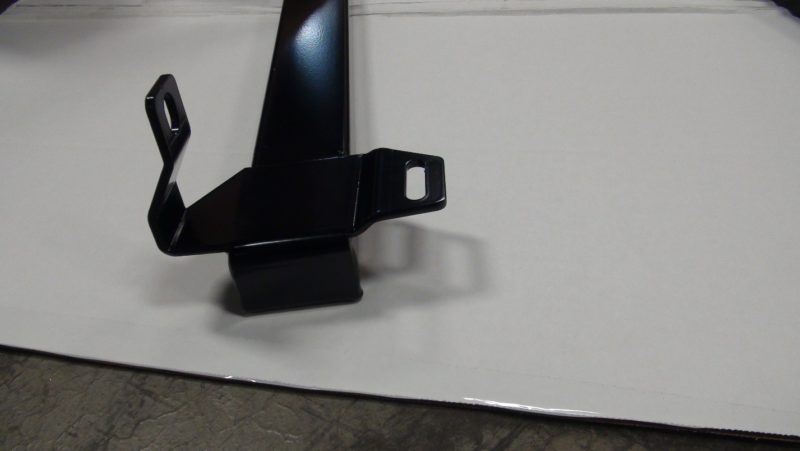 Bolting them in isn’t as easy as it is in the front, and is considered a two-person job. In this case, the car was on a lift and a transmission jack was used to apply upward pressure on the front of the lower control arm. This took weight off of the through-bolt so it could be removed.

***NOTE: Extreme caution and must be taken as the rear springs are still compressed and could pop out if the control arms aren’t supported correctly. *** 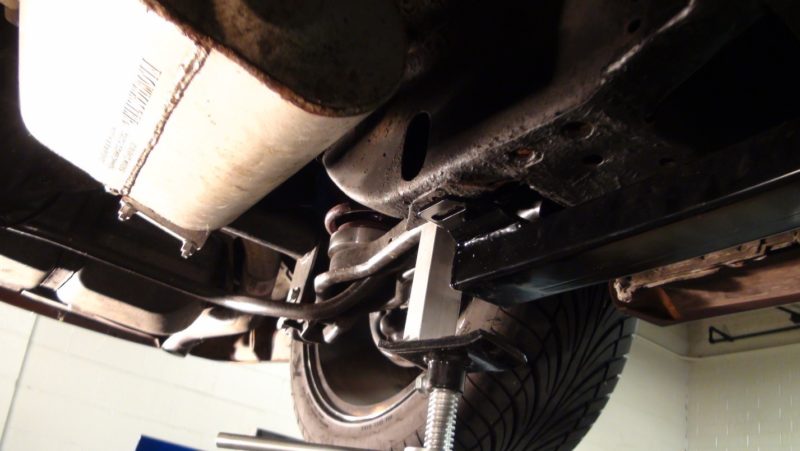 The rear of the connectors are raised into place and the through-bolt is reinstalled.

The lower control arm alignment needs to be good to get the bolt through. Adjusting the transmission jack helped. The inside portion of the bracket bolts through the bottom of the torque box. 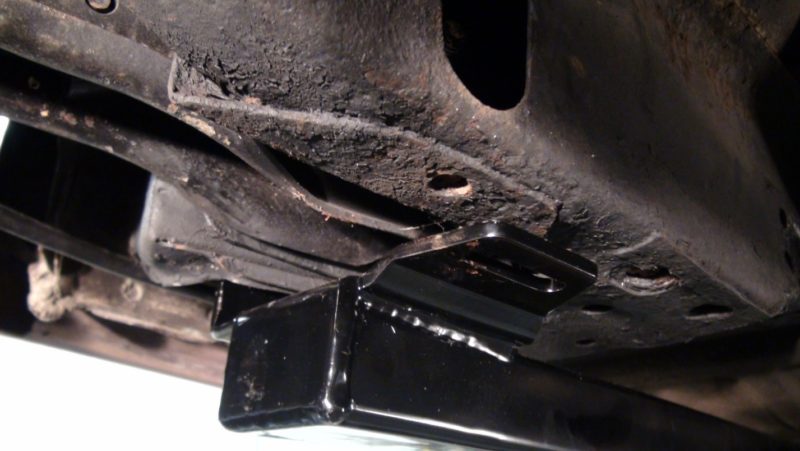 There is a drainage hole there from the factory, but it’s not likely to line up with the slot nor for the bolt to run through. 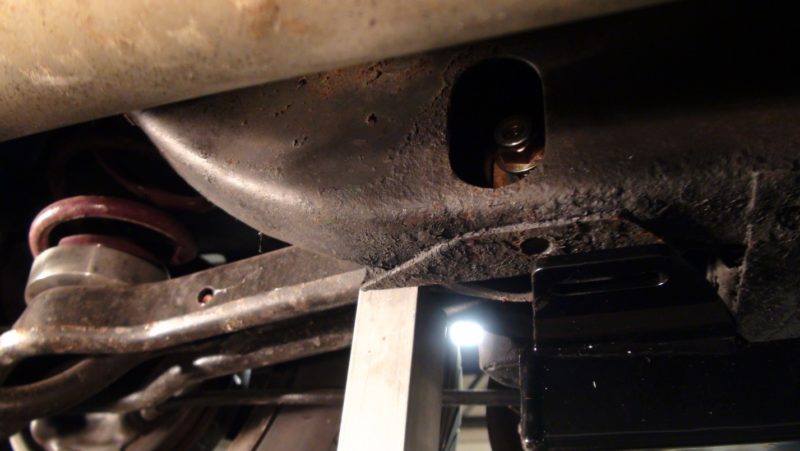 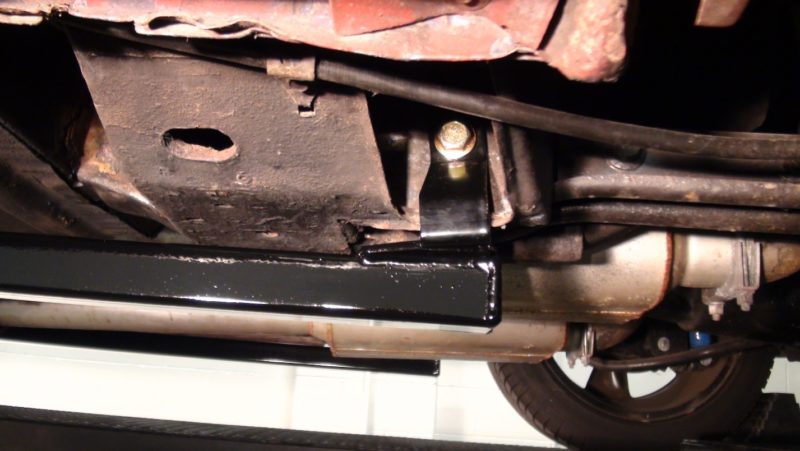 And here’s a profile shot of the car: 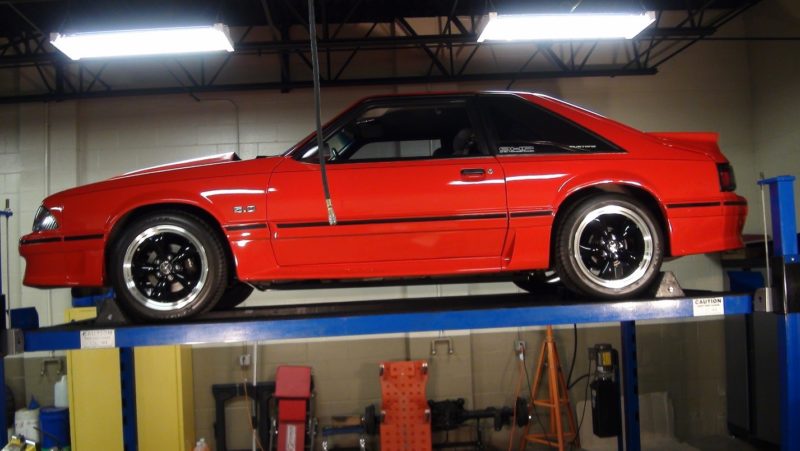 Here are the results with the Summit full length connectors. The front right weighed 2 lbs. more than the original connectors and five more than no connectors at all: 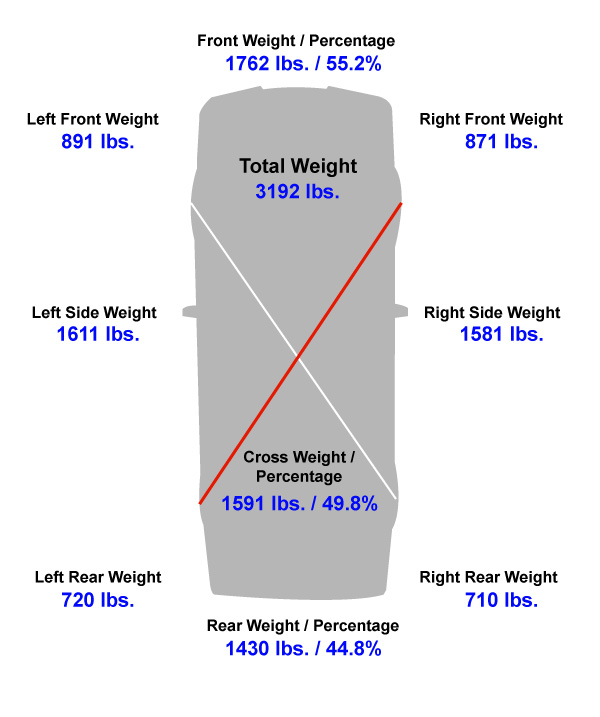 The car was jacked up for the final test and resulted in 362 lbs. So, despite weighing two more pounds than shorty connectors, and five more than no connectors, this is roughly a 25-lb. reduction when accounting for the extra 5 lbs. of connector at the front right. This indicates that the Summit connectors reduce torsional twist in addition to longitudinal.

What did we learn from the testing?

First, even with amazingly accurate Intercomp scales, we did see minor corner weight differences each time the car was jacked up and lowered again.

The front left suspension went to full droop when jacked up. When it dropped back on the scale, the car wasn’t jounced which changed Center of Gravity (CG) slightly. We believed that jouncing the car would add unpredictability across the tests.

Seat-of-the-pants feel was great. EVERY convertible needs to get these bars. GTs and Coupes benefit greatly as well. Even if you have an old set of connectors, there’s good data to support upgrading to these Summit Racing full-length connectors.

Another side benefit is the aesthetics. The bars don’t hang down very far. Running the full length of the car, these subframe connectors don’t interrupt the line of the rocker panel either. 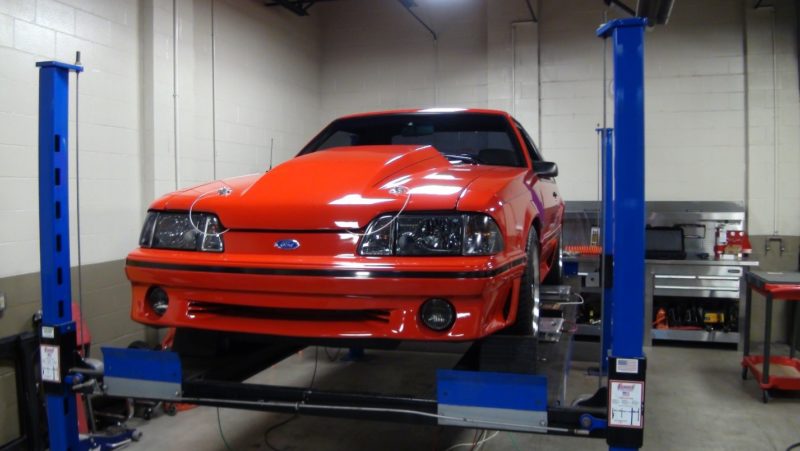