Ask Away! with Jeff Smith: Tips for Aligning Your Front Suspension to be Performance Friendly 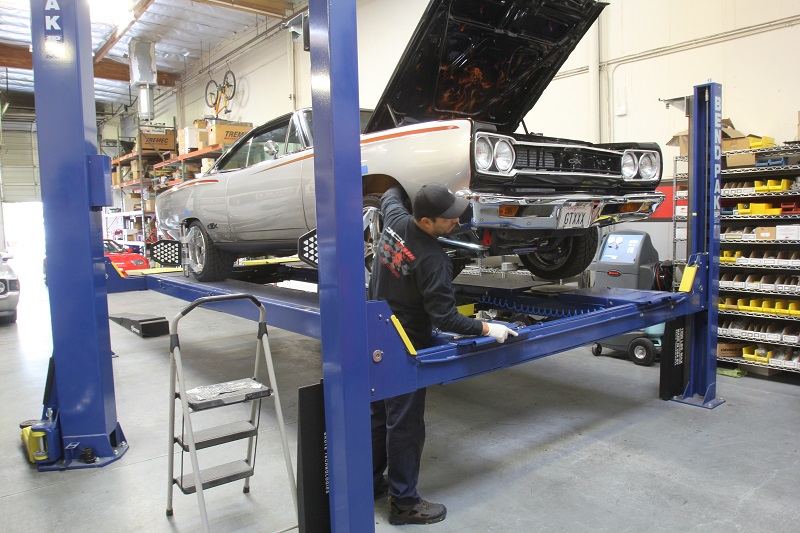 We recently worked with JCG Restoration and Customs on an alignment story on this Mopar. Their Hunter alignment machine is highly accurate and they can produce an alignment that is more performance friendly. (Image/Jeff Smith)

I am running a ‘61 Comet wagon with Mustang II type front suspension with rack and pinion steering that has replaced the stock OE shock tower suspension and steering box.  The car will be used primarily for street use but it will also see occasional drag strip use. My question lies in the front end alignment specs. Should we align to stock ‘61 Comet alignment specs or would other settings be more desirable? I know that some drag racers like extra caster for top end stability as well as a little negative camber. What are your thoughts?  — G.W.

Jeff Smith: The Mustang II was produced from 1974 through ’78 and was eventually replaced by the Fox body Mustang.

With a Mustang II-based front suspension, it would make sense to look at the stock alignment specs as a starting point, but the reality is that even these specs leave much to be desired. The Motor’s Manual for the 1974 Mustang II lists the desired caster at + ¾-degree, a desired camber spec of + ½ degree, and toe-in at 1/8-inch total. These specs are not the best for improved handling or high-speed stability.

Every car will be different and I don’t have any personal experience with either early Comets or Mustang II front suspensions, but I can offer some generic recommendations that will get you close. But before we get into that, we should talk a little bit about bump steer.

Let’s start with a simple description. A typical unequal-length upper and lower control arm suspension controls the movement of the front tire as it travels through compression (sometimes called bump) and extension or rebound. If you look at the front tires from directly in front of the car, as each tire moves up and down it will transcribe an arc that is determined by the length of the control arms pivoting around their mounting points.

Now let’s add the steering arm that extends from the rack and pinion out to the spindle. In a perfect world, we want that steering arm to scribe the exact duplicate arc as created by the front spindle. The reality for most production cars is far from this perfect scenario. As the wheel moves up and down, the outer tie-rod scribes a slightly different arc that causes the tire to change position—moving the leading edge of the tire to create either toe-in or toe-out. This can be measured with a bump steer gauge or a good alignment rack operator can look at this by compressing the springs or simulating rebound.

Depending upon how accurately the rack and pinion was positioned relative to the front spindles will determine how much bump is induced into the front suspension as it moves through its travel.

If it’s really bad, when you hit a bump, this excessive bump steer can literally rip the steering wheel out of your hand! We’ve witnessed this. It’s nasty and makes the car almost impossible to drive. It certainly isn’t safe.

More than likely, the inherent bump steer in your system is not that bad since you didn’t describe that in your question. I do have some experience measuring bump steer in my ’65 Chevelle. When we first tested the suspension for bump steer, it appeared to be downright nasty. At one inch of suspension compression the right front produced a toe-in of 0.100-inch. In one inch of rebound (extension or droop), the same corner produced 0.135-inch of toe-out. This means the toe change was a total of 0.235-inch from out to in over 2 inches of suspension travel.

While that sounds bad—and it is—the car drove fine with not even a hint of feedback through the steering wheel. This is with very short sidewall 18-inch wheels and tires. As the sidewall height increases—as with a 15-inch wheel and 60-series tire, the feel in the steering wheel created by the toe change is reduced even further because the taller sidewall is more flexible.

Why does the driver not feel this occurring? Because the sidewall of the front tires can handle that amount of change in what is termed slip angle where one input is given to the wheel, but the tire angle deflects or slips to a slightly different direction. Many enthusiasts get all caught up in the numbers and will immediately blame any suspension and steering system that doesn’t produce a near zero bump steer.

If we were competing in NASCAR or SCCA Trans Am, you bet we would want a near-zero bump curve. But for the street—these numbers are not terrible. They’re not great, but they are not dangerous either.

Having established that a good bump steer curve is important, but not required to be near zero, we can now go back and look at some basic alignment numbers. Let’s start with camber. Most cars will respond very well to a mild negative camber setting of around -0.5 degree. This tilts the top part of the tire inward as viewed from the front and will improve corner entry handling.

Caster is the forward or rearward tilt of the top of the tire as viewed perpendicular to the front tire.

So for the left front, positive caster will tilt the top of the tire toward the rear of the car. Positive caster improves high-speed stability but does increase steering effort. Negative caster produces easier steering but is not good for stability at any speed and should be avoided. The more positive caster you can generate and still maintain the camber is a good plan—usually around 4 to 6 degrees of positive caster. Nearly all cars now are equipped with power steering so the increased effort is not an issue.

The final setting is toe.

For the street we want to maximize front tire wear, so a slight amount of toe-in is preferred. This will be around 1/32-inch per side with 1/16-inch total. When the vehicle drives down the road, the force on the front tires will tend to push the leading edges outward so this small amount of toe-in cancels out the load and the tires should be very close to zero toe running down the road.

Excessive toe-out will make the car feel very twitchy and will wear the front tires quickly.

We tend to work with custom shops on stories on alignment but friends have told me that some shops won’t even talk to you if your suspension is modified or you desire specs of something other than stock. Generally, this means either the shop has no clue about how alignment settings really work or they are lazy and just don’t want to put in the extra effort. I’ve also been told that some new electronic machines will not allow custom specs, but I don’t believe this. I know from watching the new Hunter four-wheel alignment machines that they will work just fine with custom settings.

The real issue is finding a specialist who understands the dynamic aspects of alignment and will already have a really good idea of what your car needs. Listen to that experience and compare that to what we’ve listed here. They will likely be close and a good technician might even have experience with cars like yours so it’s best to listen to people with the hands-on expertise.

High quality tires will also pay off in better handling, braking, and ride quality, so don’t stress over the alignment and then install junk tires. The total package also includes quality shock absorbers as well. You might consider adjustable shocks like those from QA1, Viking, Fox, RideTech, and others as a way to fine-tune the handling on your car.

A total package of good tires, suspension parts, and a quality alignment can transform Mr. Toad’s Wild Ride into a balanced package for the street.

3 responses to “Ask Away! with Jeff Smith: Tips for Aligning Your Front Suspension to be Performance Friendly”

Video: How to Adjust a Cadillac-Style Rear Parking Brake Caliper