Ask Away! with Jeff Smith: What’s the Best Rotor Tip and Terminal Spacing for my Ignition System? 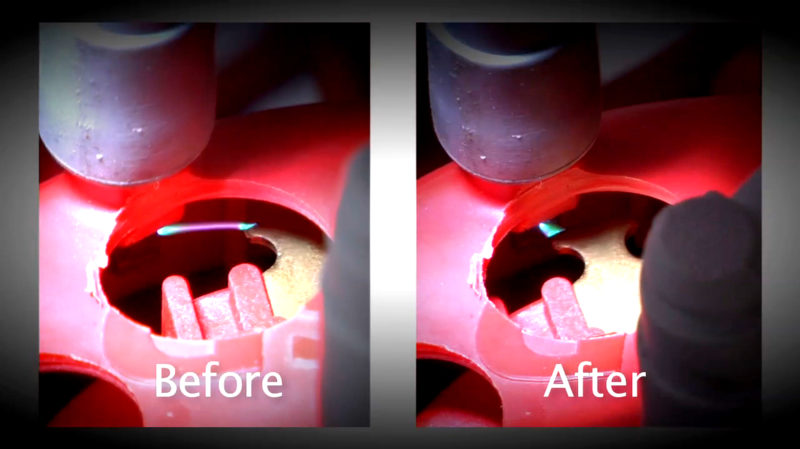 This is an image we pulled off MSD’s video on rotor phasing to show how an excessive rotor gap can make the spark jump too far. This will show up as all kinds of problems that can be easily fixed with an adjustable rotor. (Image/MSD Performance)

I have a question about the optimum distributor rotor tip and terminal gap. Modern replacement parts for our classics are all over the place, either in terms of length, cap eccentricity, or quality control in general. Rotors listed as ‘correct’ for the application differ markedly in length.

So my question would be: All things being equal, do we want a relatively close rotor tip and terminal spacing? Would 0.020-inch be acceptable? In other words, make this as close as practical? Then, if we want wide gaps anywhere, open up the plug gaps. Just not inside the distributor. See where I’m goin’ with this?

This old ‘60s Ford I’m working on has a huge rotor tip gap using a Motorcraft rotor. What I’m finding online is interesting in terms of the coil voltage necessary to fire the plugs. Thanks for looking into this. — Ted P.

Jeff Smith: This is an interesting question, Ted.

Your line of reasoning is correct. The idea is to minimize the resistance in the high-tension circuit from the coil to the spark plugs by reducing the gap the spark must jump in order make it to the spark plug. As the gap between the rotor and the distributor cap increases, this demands greater voltage from the coil and the secondary side of the ignition system. Minimizing the resistance in the circuit is important.

This relates to much more than just the actual gap between the rotor and the distributor cap.

Let’s start with materials and work our way through the entire secondary side of the ignition system. We all know there are several price layers in most automotive components including the ignition side. Less-expensive rotors and distributor caps use aluminum terminals instead of copper. We found a chart online that states that copper is used as the conductivity standard for electrical work. We also found that aluminum is only 61 percent as conductive as copper—which isn’t good.

Then consider that the first thing that happens with aluminum is after use in the field it quickly is covered by a thin aluminum-oxide coating—which increases its resistance. So there’s a good reason to avoid the cheap distributor caps and look instead for caps using copper terminals. Of course, that extends to the rotor as you have mentioned.

I pulled a couple of distributors out of parts bin and measured resistance between a copper terminal on an MSD distributor and a brand new cap with aluminum terminals. The copper MSD cap was well used so I checked resistance before and after polishing it up. With the clean terminal it was less than 0.5 ohm—almost nothing—but corroded it was around 1,000 ohms. The new aluminum terminal was only around 50 ohms—but likely it would soar well past 1,000 after a few miles of use. But none of these numbers are very high.

As far as rotor clearances to the cap are concerned, we called MSD and they said their spec for clearance is 0.074-inch. We roughly measured a new MSD distributor and found similar number. Other HEI distributors we checked were worse. But there are other considerations besides just the lateral clearance.

We should discuss rotor phasing.

For most of the world, we place the cap on the distributor and that’s about as much thought as we put into rotor phasing, but it’s something worth further consideration.

For the typical distributors that we’ve checked, when the center pole piece is aligned with the magnetic pickup to trigger the coil to fire, the rotor will be directly aligned with a given terminal on the distributor cap. This is where the rotor is placed with initial timing, and because the rotor is tied to the paddle wheel on the shaft, changes in timing don’t affect the rotor phasing.

However, on EFI engines, changes to ignition timing do affect the position of the rotor since the rotor is locked to the shaft and doesn’t move. This is where phasing the rotor to place it so that advancing or retarding the timing does not move the rotor too far away from the terminal cap. It’s a bit long-winded to go through how to do this, and there is a slick MSD video by our friend Joe Pando that shows how rotor phasing can affect spark output you check out.

We must also include a discussion about spark plug wires. Again on the inexpensive side, are what are called ‘suppression’ wires usually constructed from fiberglass-weave impregnated with carbon. These wires will measure really high resistance per foot—like 3,000 ohms and above.

These wires just won’t deliver a strong spark to the plug so you should avoid them. Instead, look for what are now almost standard spiral wrap wires. Almost everybody makes them now. Getting down to the 50 ohms per foot area to reduce resistance isn’t really necessary. There are really good plug wires at 150 to 500 ohms per foot that will do the job.

2 responses to “Ask Away! with Jeff Smith: What’s the Best Rotor Tip and Terminal Spacing for my Ignition System?”