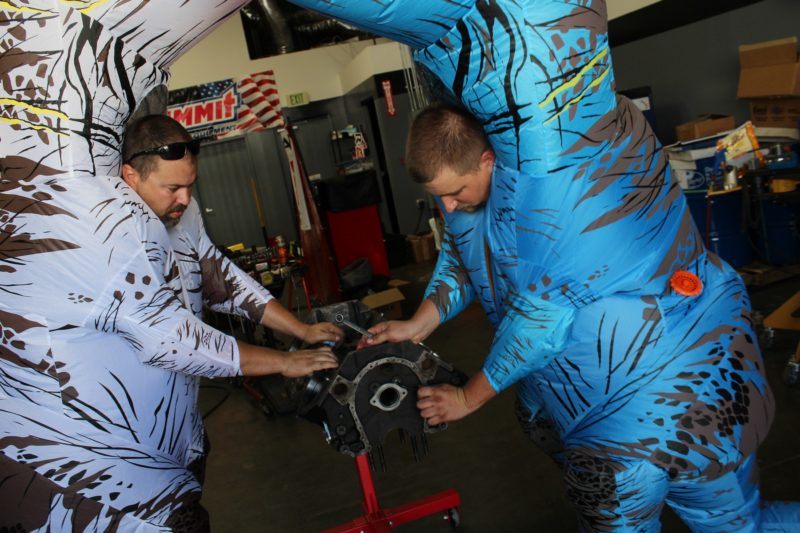 The team that finished last place in the E3 spark plug wire set building competition had to wear inflatable T-Rex suits for one hour of shop work. Whoever thought of that deserves a very nice high-five. (Image/PowerAuto Media)

During Episode 3 of the $10K Drag Shootout, we saw one of our four teams get hit with a 50-pound weight penalty that cost them some money, but then score a free nitrous kit for winning a taco-eating contest, followed by some trash-talking-induced team drama.

Later, all of the teams completed in the E3 Spark Plug Wire Challenge, where each team was tasked with assembling an E3 Spark Plugs spark plug wire set in the shortest time, installed in the proper firing order with the fewest penalties to the team with the shortest wires. The winner earned a lightweight PRW harmonic balancer, a bonus $250 to their build budget, and a PRW engine test stand.

The loser? They had to wear inflatable T-Rex for an hour of work in the shop.

And that’s just a little bit of the fun that was had in the 35-minute Episode 4.

Take a closer look what each of the teams are doing to their cars, which again, include a pair of Fox Body Mustangs, a third-gen Camaro, and a G-body Regal.

You can catch more videos and features at the Horsepower Wars page at OnAllCylinders.