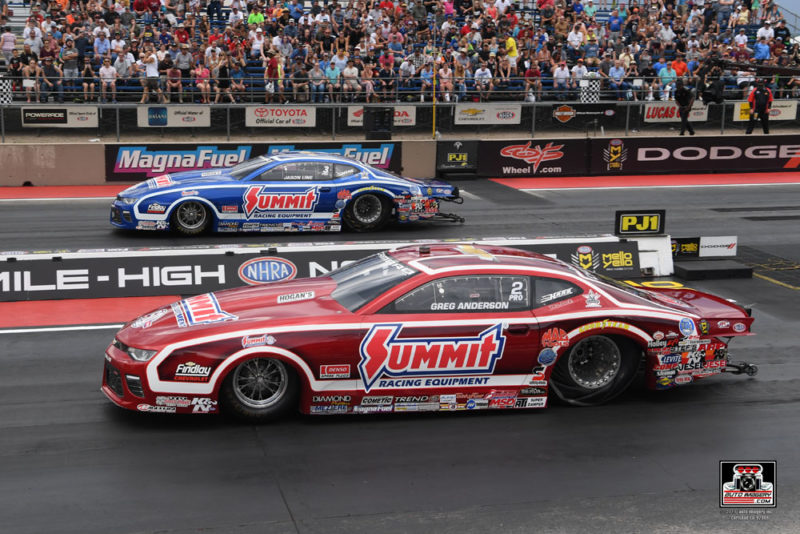 NHRA Pro Stock drivers Greg Anderson and Jason Line will sport the Summit Racing logo on the sides of their 1,400-horsepower Chevy Camaro race cars for several more years, after KB Racing inked a deal with the world’s largest aftermarket performance company to extend the partnership.

“We’re proud to have that Summit Racing Equipment banner on the door,” Anderson said. “Summit Racing has faith in us and has shown that over the years. That really makes you feel good, and I think our best years are yet to come.”

“It’s certainly an honor to have Summit Racing as our sponsor,” Line said. “We’ve always felt it was a great match because we share the same values and interests. The Summit Racing customer is a hot rodder, and that’s what we are, too. Having the opportunity to represent Summit Racing every day is something that none of us take lightly. The future looks bright, and we’re proud to continue our relationship.”

Summit Racing officials feel the same way about them.

“Greg and Jason do an excellent job of representing our company—they make real connections with fans and our customers,” said Al Noe, Summit Racing’s chief marketing officer. “The competition in NHRA Pro Stock this year has been amazing, and we are proud to continue our long-time commitment to NHRA and the Pro Stock class.”

The Summit Racing/KB Racing partnership goes back to 2004 when Anderson first competed under the Summit Racing banner; the company extended its sponsorship to Line in 2005. Together, the drivers have won six NHRA Pro Stock championships for Summit Racing—Anderson in 2004, 2005, and 2010; and Line in 2006, 2011, and 2016.

“It means a lot that Summit Racing continues to support KB Racing,” said team owner Ken Black. “I’ll never forget that when they came on board with us in 2004, Greg won the very first race of the season with the Summit Racing-painted car. We’ve had a great partnership with the great folks over there ever since. I think it says a lot about the future of Pro Stock that Summit Racing has continued its commitment to us, and we couldn’t be more excited about what’s in store for the class and our team in the years ahead.”

“Summit Racing and KB Racing have one of the strongest partnerships in drag racing,” said Jim Greenleaf, Summit Racing’s motorsports and events manager. “Greg, Jason, and the rest of the KB Racing team are uber-competitive and thoroughly professional—they are great ambassadors for Summit Racing and the sport.”

Anderson is currently in first place in the NHRA Pro Stock points standings heading into this weekend’s Lucas Oil NHRA Nationals in Brainerd, MN. Line is in ninth place.