If you build engines, even just for fun, this has probably happened to you. The engine is fully assembled and you’ve bolted it in the car. As soon as the engine starts, you know you have a problem. Maybe it’s a horribly leaking rear main seal because it was accidentally installed backwards. Or maybe a mysterious knocking sound that won’t go away. Or maybe the cam just went flat. Yes, all of those disasters have happened to us! The fix involves pulling the engine back out and repairing the damage. It would have been nice if we had a test stand where we could run the engine first and uncover the fault where it would be easy to repair.

Maybe the guys at Summit Racing have been there too because they just released a simple, self-contained engine test stand on wheels. We decided our life would not be complete without one of these gems and a scant few days later the UPS guy dropped off a big package on our shop floor and we started bolting it together.

Once our stand was assembled, we started working on all the little details that make this whole system work. Summit has done much of the work for you already, creating an aluminum radiator and hose kit intended for popular engines like the small block Chevy and Fords. We also made a decision to make this stand work for both carbureted and EFI engines, so we began lining up the parts we needed.

Sure, we could have just dropped a fuel line into a plastic gas can and called it good, but this stand is so nice, it needed a professional fuel system. We had a Walbro external fuel pump left over from a previous project, but to begin with, we needed a fuel reservoir. Summit Racing came through again with a cool 4-gallon aluminum fuel cell with two inlets, return, and vent connections. We used Summit AN adapters to pull these -8 connections down to -6 and then plumbed both the Walbro and the Professional Products lift pump for the carbureted side with stainless -6 hose and fittings.

We realized we needed some kind of accessory drive so we added Holley’s slick LS engine accessory drive that allows us to run the truck balancer. This kit includes the power steering pump which we didn’t need so we’ll just loop the return hose back into the reservoir for this test.

On the exhaust side, we discovered that all of our chassis headers interfered with the rear uprights to work, so we decided to add a set of Summit LS shorty headers for a 2007 Chevy pickup. We then had our pal Scott Gillman weld some lead-down pipes to a set of 2 ½-inch mandrel-bent tubing from Summit that lead to a pair of Borla mufflers that complete the exhaust system. Mufflers are a good idea because you want to be able to hear the engine in case it develops a noise.

After we had our system constructed, another friend, Bill Irwin, suggested a very cool idea. He reasoned we could easily plumb the exhaust into a single crossflow muffler that would sit nicely just behind the rear uprights. This would require only one muffler that could be permanently attached to the stand that would also reduce the overall length. It’s a great idea we might have to try.

After testing the fuel system for leaks and adding five quarts of 10w30 engine oil and also added a bottle of Royal Purple Purple Ice for anti-corrosion protection and then hit the throttle to prime the engine. It fired on the first revolution and after a minor carb adjustment the 6.0L quickly settled into a nice idle since the cam in our 6.0L is still stock. With no leaks, we ran the engine until the coolant came up to temperature. We now know our 6.0L is good to go on the dyno at Westech for a big series of upcoming tests. Overall, the biggest job was wiring all the electrical and welding up the exhaust, but even those were simple and now we’ve got the best engine test stand in the neighborhood! 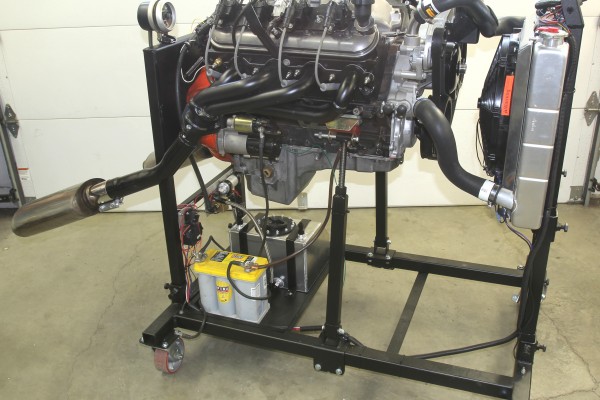 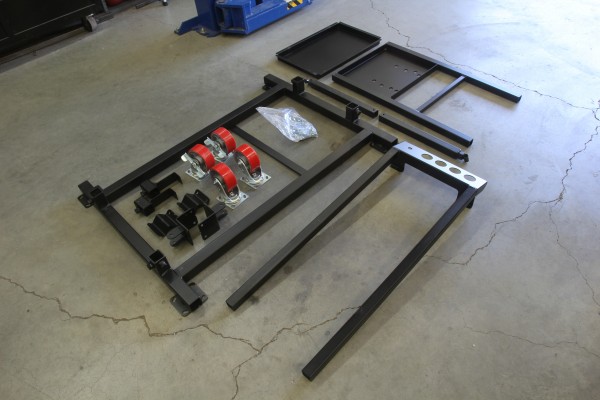 Here’s our engine test stand fully assembled with a few options that make it great for running both carbureted and fuel injected engines. We expect we will be very popular now with all our friends – and even perhaps with people we’ve not met yet once the word gets out.

Here’s how our stand arrived after we removed it from its shipping box.

It only took about 10 minutes to bolt it all together. The large 5-inch polyurethane wheels are tall enough to clear the legs of our engine hoist – very important.

We started by installing the gauges and working on the electrical side of the installation. By far, this took the most amount of time because we wanted a professional looking stand with a clean appearance. We slid the four electric Summit gauges – oil pressure, water temperature, volts, and a vacuum gauge. We then added a main switch to power everything that is controlled by a 30-amp relay mounted near the battery.

Then we mounted the fan to the radiator using 10-32 stainless button head fasteners to make it look cool. This worked out great and then used a relay that is triggered by either a 180-degree switch mounted in the cylinder head or with a separate manual fan switch. The relay and 180-degree switch are supplied in the Summit fan relay kit.

We decided our first test victim would be our LQ-4 LS engine with a carburetor instead of EFI just to make life a little simpler. This requires mounting an MSD LS ignition box on the rear of the stand to control the ignition system, but that was easy.

This is the slick Summit 4-gallon aluminum fuel cell. The cell offers two separate outlet fittings at the bottom which was perfect so we could plumb separate lines to the separate carbureted and EFI fuel pumps. The tank also has a dedicated return fitting for EFI as well as a vent opening. We needed -8 to -6 adapter fittings for all four of these bungs.

For the fuel system, we ordered some Summit fuel lines and black AN fittings to connect to the Summit fuel tank. We cut the AN hose with a high-speed cutoff wheel and then thoroughly cleaned the inside of the hose before mounting the AN lines. We were able to connect the AN fittings over the braided hose without stabbing ourselves even once using Aeroquip vice jaws.

We decided to make our stand accommodate both carbureted and EFI engines, which required mounting a small, Professional Products low pressure electric fuel pump for the carburetor and a Walbro high-pressure, external fuel pump for the EFI. We mounted the pumps to this aluminum plate. We used a small double-pole double-throw switch to toggle between the two pumps.

These are a set of Summit shorty headers for a 2007 5.3L Chevy pickup that allow us to clear the rear stand uprights. We used a pair of stock 3-bolt LS truck exhaust manifold flanges to adapt the exhaust system.

Our buddy Ed Taylor helped us out with a pair of small 2 ½-inch Borla mufflers so we don’t annoy the neighbors when we fire this baby up. Plus, with a muffled exhaust, you will be able to hear any unusual noises coming from your engine.

Of course we needed a battery to supply power so we opted for Optima. Since we probably won’t use an alternator, we also used Optima’s trickle charger to keep the battery fully charged at all times.

With the exhaust plumbed with a pair of Borla mufflers and some 2 ½-inch tubing from Summit, we fired up the 6.0L and made sure there were no leaks. For coolant, we used filtered water (do not use distilled water) and a bottle of Royal Purple’s Purple Ice for its corrosion protection.