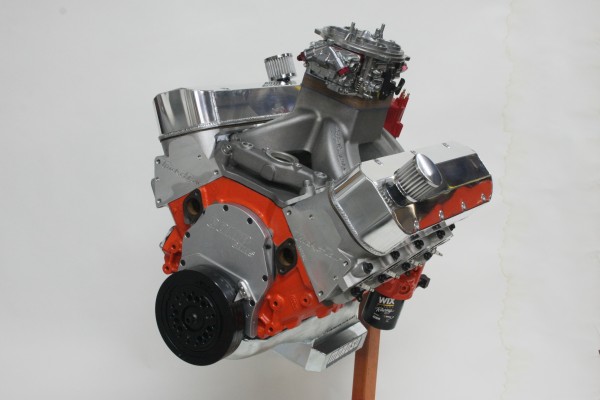 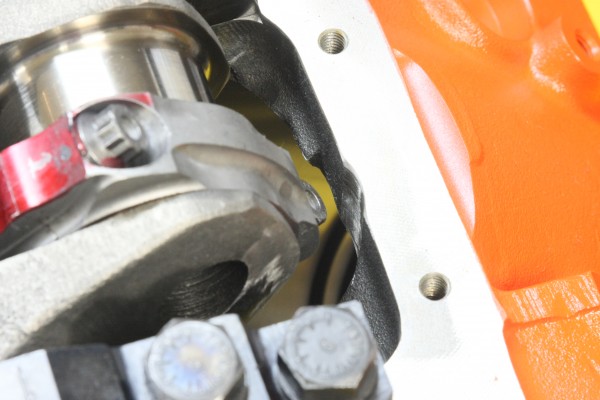 The Trick Flow PowerPort 365 cylinder heads came with PAC Racing triple valve springs installed at 2.100 inch. They are designed for cams making up to .900 inches of lift. Petralia swapped out the springs for a more hydraulic roller cam-friendly set. He installed them at 2.010 inch using .030 and .060 inch shims placed under the spring seat locators.

Petralia's shop blueprints everything in every engine they build, which includes CC'ing the combustion chambers of the heads and the pistons in the cylinder bores. That allows him to get the most accurate compression ratio calculations possible.

Piston-to-valve clearance and valve spring coil bind clearance were checked using 1.8:1 ratio COMP Cams’ Ultra Pro Magnum XD rockers. The engine was dyno'd using these and Comp's 1.7:1 Ultra Gold rockers. It made more power with the 1.7's so those are what shipped on the engine.

Petralia stocks about 100 different carb spacers in his shop at all times so he'll have them on hand for dyno testing. This 1 1/16 inch tall spacer worked the best out of about a dozen tried on the dyno.

The 582’s power pull in graph form. It's fun to brag about peak horsepower, but what good is it if you have to rev your street engine up to 7,500 RPM just to see it? The 582 makes power in a real-world RPM range for the street.

Back in 1999, Mike Petralia at Hardcore Horsepower & Dyno Shop in Franklin, TN built a 556-cubic-inch big block Chevy test mule for Hot Rod magazine. That engine made 790 horsepower at 6,700 rpm and 656 ft.-lbs. of torque at 5,700 rpm on pump gas. That was a ton of power back then, and more than respectable even today.

But horsepower never rests. In his never-ending pursuit to build something above and beyond the norm, Petralia recently pushed the go button on his biggest, most powerful pump gas engine to date. The 582-cubic-inch Rat motor makes 800 horsepower 500 rpm lower in the powerband. The displacement increase also means a huge bump in torque to 741 ft.-lbs. at 4,700 rpm—1,000 rpm lower than the 556. That means this beast can rule the streets in any heavyweight daily driver.

To keep this big power plant muscle car-friendly, Petralia used a standard 9.800-inch deck Dart Big M block. The cast iron block features 4-bolt mains and has factory-finished 4.600-inch cylinder bores fully honed to spec. Petralia had Dart do some CNC clearancing on the block to make sure the connecting rods wouldn’t mash into the side rails when the 4.375-inch stroke, forged steel Scat crank swings around.

Some builders opt for the 10.200-inch tall deck block like the one used on the Chevrolet Performance ZZ572 crate engines. But the tall deck makes fitting headers into passenger cars a lot tougher since it raises the headers up almost a half-inch. Add in the raised exhaust ports of most aftermarket performance cylinder heads and you’ve got a real installation headache just waiting to happen when you try to stuff a tall deck block into a short deck chassis.

The only thing that may suffer from running a short deck block is connecting rod length—and keeping the rod/stroke ratio happy is key to building a successful street engine. Petralia had some custom forged pistons made that gave this engine almost 11:1 compression, but still allowed the use of a long rod (6.535 inch Lunatis in this case). The combination gives the Rat a 1.49:1 rod/stroke ratio—not the greatest, but good enough for this relatively low-rpm street beast. In fact, it’s right there with the 1.50:1 rod/stroke ratio found with the popular 540-cubic-inch big Chevy stroker combos that use 6.385 inch connecting rods, For comparison, a stock 454-cubic-inch big Chevy has a 1.6:1 rod/stroke ratio, and a stock small block 350 has a 1.64:1 ratio.

That original 556 big block had cylinder heads with 340cc intake runners. If not for the almost 600 cubic inches of engine, Petralia says he would not have used a cylinder head as big as Trick Flow’s CNC-ported PowerPort® 365 head on a street engine. He swapped out the stiff .900 inch lift solid roller valve springs that come standard on the Trick Flow heads for a softer spring set from COMP Cams. The 1.539-inch diameter dual springs match up well with the tall valves, yet make enough pressure to control the heavy intake valves above 6,000 rpm. The COMP springs installed at 2.010-inch height, giving .105-inch clearance before coil bind, which is plenty.

The 582 is lubed by a complete Moroso oiling system. The Street/Strip wet sump oil pan comes with a crank scraper and windage screen that clear a 4.500-inch stroke crank. A blueprinted HV oil pump with dedicated welded pickup ensures proper oiling under any circumstances.

Petralia initially wanted to use a modern 1,050 cfm, 4150-style carburetor as it would be responsive on the street. But the Trick Flow Specialties R-Series single plane aluminum intake takes a Dominator carburetor, and he didn’t want to mess with adapters. The solution was a Quick Fuel QFX Series Dominator that needed just a little bit of dyno tuning to achieve throttle response like the engine was a 327 on steroids. The intake manifold was run as-cast without any porting mods.

A 1 1/16-inch tall phenolic carb spacer was added to keep carburetor temperatures down and direct the fuel/air mix into the manifold’s long runners. It made for a very tall induction package, but the 582 was going into a car with a six inch cowl hood scoop so it wasn’t a problem.

The MSD Pro-Billet distributor’s advance curve was adjusted by changing the advance stop bushing and springs before installation. Petralia swapped the drive gear for a Lunati nitrided gear that’s compatible with any cam.

The first few dyno test pulls are always short, just to check that things are all operating as they should. It’s not until about the 10th run that Petralia really gets on it, with just a few initial adjustments to be sure things will be OK up to maximum rpm. One of the reasons for testing this way is to determine exactly where max RPM will end up. Since custom engines like this don’t really follow anyone’s catalog rpm estimates, Petralia will just keep creeping up on the tach, adding a few hundred rpm to the end of each pull until power really starts to fall off. That’s when he knows the current setup has reached its peak.

“It’s pretty cool when you make 768 horsepower and 720 ft.-lbs. of torque without really tuning anything,” Petralia said about the 582.

Once that is established, the fine-tuning begins. Petralia might make some timing or fuel curve adjustments, add or delete a carb spacer, and try different size headers. Other adjustments could include valve lash, and swapping rocker arms and carburetors, just to see what will add more power. If power keeps climbing, it’s not unusual to run an engine more than 70 pulls just to be sure that everything has been tried and tested.

A Word About Oil

Petralia does an oil change about every 25 full pulls when on the dyno. It’s cheap insurance. He starts with dedicated break-in oil and high-efficiency oil filters that trap particles down to 21 microns. Depending on the type of engine, Petralia might then use either a full synthetic or high-performance mineral base oil and a new filter. The used oil is carefully inspected for any signs of wear or particles, and the filter is cut open to check for signs of damage inside. This is his way of knowing that absolutely nothing is wrong on the inside and the engine is making the best power possible.

Petralia worked with Summit Racing to create Hardcore Horsepower 582 engine combos, so you can duplicate the build.