Figuring Out the Track: How to Read the Track Surface and Make it Work for You! 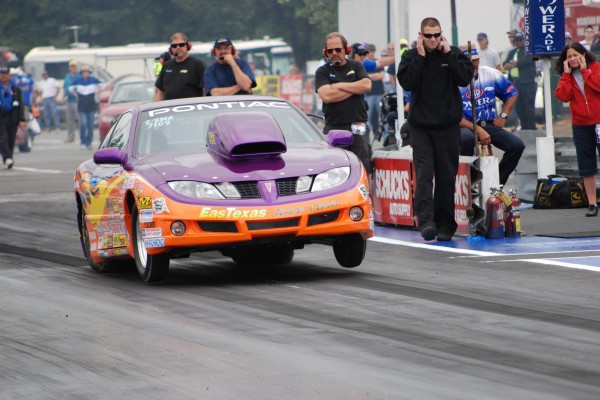 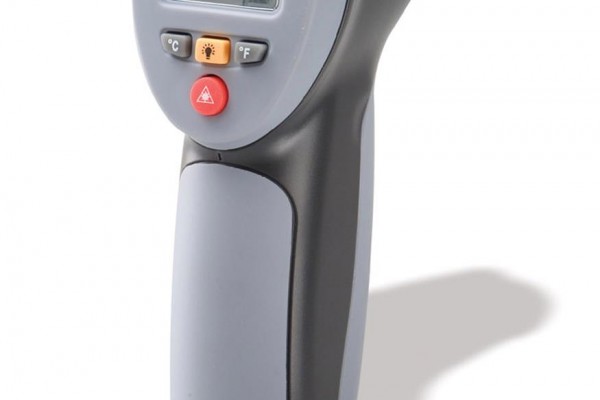 Aside from a logbook, the only other real tool you’ll need to read the track is a digital infrared thermometer such as this job from Summit Racing. Check out the catalog – there are over two-dozen different examples in wide range of prices.

Here’s a digital thermometer in use at an NHRA national event.

Once the temperature is recorded (sometimes at various points on the track surface), it’s noted in the logbook.

Pros (and bucks-up Sportsmen) use a device called a “Track Meter” or “Track Surface Analyzer”. It effectively measures the stickiness of the racing surface.

Most little guys can’t afford the luxury of a Track Meter, nor do they have the opportunity to check the track before every run. The next best thing is to check the temperature and if possible walk the track. Here, old master Connie Kalitta is surveying the conditions.

Anyone who has ever drag raced knows that weather and track conditions can pretty much change by the minute. We also know that days at the track can be long, so the weather and the track you started out with in the morning can turn into a completely different beast by midday and evening.

We’ve looked at tuning for the weather before, but what about figuring out the track?

Tools Of The Trade

Figuring out the track sounds complicated, but it’s not. But before you hit the track, you’ll need a couple of things. First, you’ll need a dedicated log book. Summit Racing sells them under part number SUM-G5155. They also have one from ATI under part number Z31010. Figure an investment of less than $10 for these record-keeping books.  Typically, the books allow you to log a dozen runs per page and keep track of car performance, car setup, weather conditions, and track conditions.

The big advantage of using a gun-style thermometer is the fact you don’t need to physically make contact with the object you’re measuring. Once the gun is in your hands, use it to measure both the track and tire temperature (following the burnout) and write down the numbers in your log book. These figures won’t help you with the first pass down the track, but later in the day, you can use it to put more or less heat in the tires by way of the burnout.

Legendary chassis and race car builder Jerry Bickel uses four groups of track temperatures and he works his tuning magic from there:

Fair enough, but how to do you tune for temperatures?

Cold Track:  “While the general rule of thumb for track temperatures is the cooler the better, there is a point where the available traction diminishes. If the track temperature falls below 90 degrees, conditions can become rather tricky. You should closely monitor the runs made by cars in front of you and be ready to make whatever changes time allows. Below 75 degrees F, you can expect significant traction difficulties, especially if water has begun to condense on the track surface. Cold track temperatures really cool off the tires quickly. Make a hard burnout to put as much heat into the tires as possible. Once the burnout is complete, your goal should be to get the car to the starting line as soon as possible.”

Cool Track:  “This is the most desirable surface temperature for most race tracks. If the track surface has a good cover of rubber, it will usually take all you can throw at it. Be aggressive with all aspects of the engine, clutch, and chassis tuning. If the air is dense and the surface is smooth, the run should be rewarding.”

Warm Track:  “At these temperatures, the rubber on the track begins to soften and pull loose from the surface. In this temperature range, quality runs are still possible if you don’t overpower the surface and pull the rubber up. Softer clutch engagement and chassis settings are the key, but you’ll need to gather a lot of experience with your car to determine how to take enough out of the car without compromising performance.”

Hot Track:  “Expect greasy track conditions and reduced engine power from the thin air. Traction will bottom out somewhere between 12:00 noon to 4 or 5:00 pm (just in time for eliminations). Don’t try to impress everyone with the car’s performance. In these conditions, almost everyone has enough power to win. You have to avoid overpowering the track at all costs, and it’s your job to get to the finish line ahead of the next guy.”

What if you stage and the track officials put a halt to racing? If the burnout is done and you’re prevented from continuing, the tires will continue to gain pressure. Bickel reminds us that with this situation, there is no reliable way to know exactly how much heat is still in the tires. In this case, Bickel suggests you reset the air pressure in the slicks before you re-enter the water box and then do another burnout.

As the cars ahead of you make passes, rubber is incrementally built up on the track surface. This rubber build-up is known as the race track “groove,” and it’s the place that offers the best traction. Not by coincidence, it’s also the same place track maintenance people lay down traction compound.

Pro teams use a device (“Track Meter” or “Track Surface Analyzer”) to measure exactly howsticky the track is, but these devices are pretty much beyond the scope of little guys (they cost approximately $1,500). The next best bet is to simply walk the track and feel how much or how little the track grabs your shoes.

What you have to watch for are bald spots. Those are the shiny spots on the track where the rubber has been pulled away. Usually these bald spots are created by high horsepower cars (alcohol or fuel cars, for example). It’s no real secret to seasoned racers that those bald spots don’t offer much in terms of traction. If you see them on the track, the idea is to stage your car to the right or the left of the bald spots, making sure there is sufficient rubber laid down in the spot you’ve selected.

During the course of an event, you may encounter marbles on the track surface. These marbles are actually pieces of rubber that have been peeled right off the track surface. A well run track will scrape the track when this happens, but if they don’t, it’s up to you to stage your car so that it makes the pass on a clean, marble-free race surface.

Jerry Bickel has some closing thoughts on finding your spot on the track.

“Watch the cars that run in front of you,” Bickel said. “Pay attention to the launches and see which lane is providing the lowest ET’s. An oil down can change the bad lane into the good lane very quickly if the oil is non-synthetic and the track maintenance crews do a good job of cleanup. The lane you get might not the best one so you have to be ready to compensate quickly.”

As you can see, figuring out the track isn’t an exact science, but at least there are some inexpensive tools at your disposal to make it work in your favor. Get the log book and infrared thermometer, keep good records, and you should be one step ahead of the competition — and the track.

One response to “Figuring Out the Track: How to Read the Track Surface and Make it Work for You!”