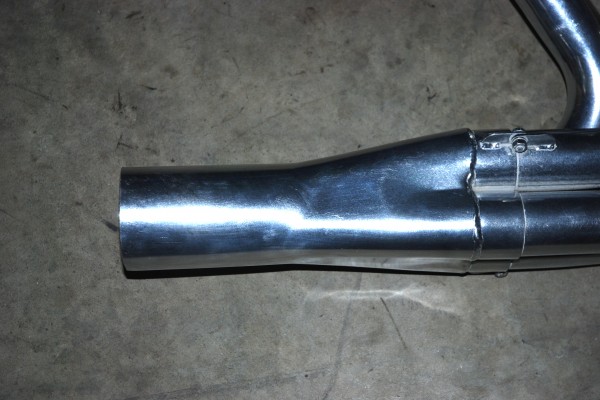 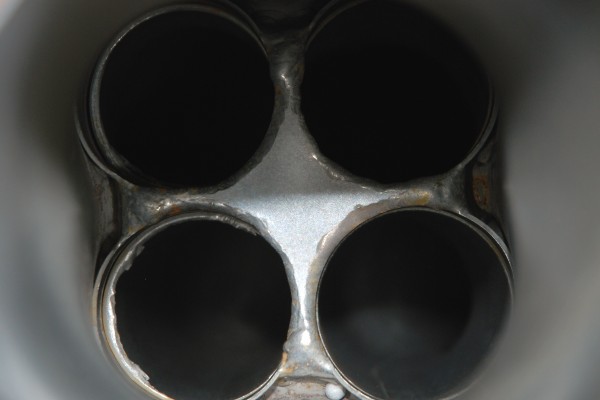 Collectors are necessary. That’s a no brainer. There are several different collector configurations out there. This is a standard 4-into-1 setup. Keep in mind you can easily change the overall length of a collector.

This is a look inside a conventional 4-into-1 collector. Compare it to the merge collector in the next photos.

Hooker Headers also offers a special “merge” collector. While it looks “normal” on the outside (In this format, the header is still a 4-into-1) however it uses a special spear within the collector to help smooth the transition of spent gases.

Adjustable headers such as this Hooker race model are designed to bolt together. This makes changing the collector configuration relatively simple. It also helps when tuning.

In the first part of our Header Theory posts, we dug into the whys and how of header primary tube length. If you recall, Hooker Headers and Reher-Morrison Racing Engines gave us an in-depth look at what the header primary tube does and how to tune it. They also gave us insight into how the tuned exhaust header intertwines with a tuned induction system. This time around, we’ll examine the header collector.

We know the collector is sometimes overlooked, but it is important.

What does the header collector really do? According to Hooker: “The major objective of the collector is to take advantage of the ‘secondary tuning impulses’ from the other pipes in the system. The influence of the collector is generally restricted to the rpm level below the torque peak of the engine in question.  Collector sizing is more critical in engines that spend the majority of their time in the lower rpm ranges.”

Aside from 180-degree headers (which are unquestionably a nightmare to build for any car and well beyond our scope here), there are two different types of headers: 4-into-1 and “Try-Y” (4-2-1-collector).

“Conventional 4-into-1 headers collect the exhaust for one side of the engine into a single collector.  Despite their simplicity, we have found no advantage in using any more complex header design for most race cars.”

Try-Y (4-2-1) headers collect the exhaust by pairs of cylinders that are as far apart as possible in the firing order. The idea is the gases racing past the silent tube will scavenge a vacuum in it, reducing exhaust reversion. We have found no advantage in this design for the majority of racing applications.”

David Reher added a caveat to the above.

“Where header design is compromised due to things like shock towers and tight engine compartments, it may be worth testing a properly designed Try-Y, particularly in applications with lower engine speeds,” Reher said.

Collector length is important, but in all honesty, it’s not absolutely 100 percent critical. Sure, some racers take the time to adjust collector length for their given combinations. That’s fine, but the problem is many folks believe that changes in the collector length can have a profound change in the engine tune-up.

Reher-Morrison notes that a collector length change is tiny in terms of performance versus the changes you can make in the intake tract, camshaft, and so on. The headers need to compliment the engine you build. If you build an engine and you need to revise it to suit the car, changes in the camshaft (for example, advancing the camshaft) will have a far greater effect than making changes to the collector. If you need more bottom-end and you want to get it with the headers, adding primary tube length is a better idea.

Reher-Morrison provides us with a range of collector diameters and lengths we should aim for.

“Like primary tube diameter, the diameter of the collector affects the exhaust restriction and velocity.  Many small block racing engines perform better with collector diameters between 3 and 3-1/2-inches,” Reher said. “Large displacement, high-horsepower engines require 4-5-inch (diameter) collectors. The length for most drag racing applications varies between 8-inches and 14-inches.”

There is a variable to the conventional 4-into-1 header, and that’s the merge collector. With a series of both exhaust waves and sonic waves entering the collector, it’s easy to see that there is probably a bunch more to collector shape than first meets the eye. For example, Hooker tells us that a merge collector minimizes the reflected wave, so it has less effect upon the inertia pulses. The actual hourglass shape of this collector design serves to regulate the high and low pressures. It also tends to speed up the velocity of the gas flow. Additionally, the shape of the collector (particularly in the case of a merge collector) helps equalize the transition of the individual exhaust tube gases.

The overall length of the merge collector is important, as is the angularity of the tubes that physically “collect” in the collector. You’ll also find a “spear” or “pyramid” inside a merge collector. The purpose of this pyramid is to control the exhaust gases so that they do not re-enter the primary tube and travel backwards into the engine by way of the low-pressure area (exhaust gas dilution).

The neck of the hourglass is important too. By reducing the size of the neck, the exhaust gas velocity will increase as it is carried into and out of the secondary tube (collector). This form of collector can prove efficient; some folks have experienced an actual increase in the EGT (Exhaust Gas Temperature) in certain applications. The reason is the header assembly is extracting more of the air/fuel mixture out of the cylinder and likely burning it in the collector. Because of this phenomenon, there’s chance the camshaft timing events may have to be revised. Obviously, the same applies to the carburetor jetting.

As Reher-Morrison pointed out earlier, there are other types of collectors out there too. Some pair the cylinders based upon firing order, essentially simulating a Tri-Y header configuration. For a few applications, there could be more performance with the setup.

Aside from their unique configuration, it’s interesting to note these collectors usually range in length from 23 to 25 inches–which is well beyond the length of most conventional or merge collectors. This leads to another question: If a car picks up (performance wise) with a Try-Y design, complete with a long collector, was it the configuration (Try-Y) or simply the car’s need for a longer collector that prompted the performance improvement?

When it came to header collector length, old school hot rodders used to paint a crayon line on a collector, then make a pass with the car and check the crayon mark. Where the mark discolored is where you’d chop off the collector. But what if the tuneup is really messed up and the engine is burning raw fuel in the collector?  Then the crayon mark means nothing.

David Reher has a better idea: “Watch the ET slip!” In the end, that’s the best advice anyone can give you when it comes to playing with collector length (and headers in general). The ET and MPH of the car will tell you if the header changes you made are good or bad.

When it comes to headers, the header builder is always faced with compromises. In some cars, there simply isn’t room to make headers that are the right size, the right length, and with primaries of equal length. The reality is it’s relatively easy to build “perfect” headers for something like a gas dragster because there’s nothing in the way. Try that with something like a tall-deck big block shoehorned into something with honking shock towers, and it’s a different story. It’s tough enough to squeeze a 2-inch (diameter) header into some combinations, let alone a 2-3/8 or 2-1/2 inch job. That’s where science is tossed out of the window and compromise enters the equation.

The bottom line is it’s easy to see that the science of figuring out “totally tuned” headers isn’t exactly cut and dry. More often than not, it becomes a game of test and try.