They built it to be the world’s fastest wheel-driven car—ever.

The Carbinite LSR streamliner looks more like a fighter jet than a typical car, but that happens when you’re building and shaping a Bonneville land speed car designed to go 500 miles per hour. The guys who built and will drive the car are hoping to break multiple land speed records at this year’s Speed Week at the Bonneville Salt Flats in Utah, scheduled for August 8-14—an annual event hosted by the Southern California Timing Association.

For Rob Freyvogel and Brandon Barnhart, the men who built and will race this car at Bonneville, Speed Week can’t get here fast enough.

“We were ready two years ago, but then the rains happened,” said Freyvogel, president of Renfrew, PA-based Carbinite Metal Coatings.

Freyvogel and Barnhart were standing next to the attention-grabbing 29-foot vehicle in the Summit Racing Equipment parking lot in Tallmadge, OH this week. They were on their way to Bonneville for more trial runs before Speed Week when they got the call in Iowa that the Salt Flats track was closed again due to rain.

The team turned the truck and trailer around and headed home, but pit stopped at Summit Racing where we caught up with them.

How the Carbinite LSR Streamliner Came to Be

In 2007, Hot Rod magazine published a couple features about Freyvogel’s 1963 Pontiac LeMans—a nine-second sleeper car that you can and should read about here.

The crew at Predator Performance in DuBois, PA called Freyvogel after reading about the LeMans and invited him for a visit and free dyno time. They became fast friends and the company contracted Freyvogel to do freelance engineering work.

A descendant of Charles Lindberg and Denmark native named Dennis Lindberg was working with the shop because he was interested in building a land speed racing streamliner. Freyvogel was asked to get involved.

“When [Lindberg] was out at the shop, he saw our ’63 Pontiac LeMans and thought it would make a good one-mile car,” Freyvogel said. “That was my first venture into land speed racing.”

The group converted the LeMans to a one-miler set up, and turned Lindberg loose at the Maxton land speed racetrack (comprised of three runways, but was closed to racers in 2011) where he set five records.

Next, Predator and Freyvogel turned a Chevy C4 Corvette into a Bonneville car—a project he said went way over budget. Tempers flared and the car was mothballed for years.

“Lindberg’s next idea was to team with me to find a car that was ready to race,” Freyvogel said.

Dennis Lindberg then bought a Cook-built Lakester from Dave Haller in Washington. He commissioned Freyvogel to build a turbocharged 540 cubic-inch big block Chevy to power it. They also added suspension components tailored to one-mile events. A Lakester features a sleek, aerodynamic design and share many rules with Streamliner, but mandate an open-wheel chassis. The car ran semi-successfully at the Bonneville World Finals in 2009, Freyvogel said. Although it was fun, he said, Lindberg and he had disagreements and they dissolved the race team.

“That’s when we decided if we were going to build another land speed car, we were going to do it for ourselves,” Freyvogel said. “Brandon and I made that decision on the way home from the Bonneville World Finals in 2009.”

A Different Kind of Car Build

The Carbinite LSR streamliner is powered by a twin-turbo, fuel-injected 540 cubic-inch big block Chevy, which the car owners say makes about 2,600 horsepower at 30 pounds of boost.

Even though Speed Week was cancelled in 2014, Freyvogel and Barnhart took the car to Bonneville for a test run last year. They kept increasing speed in 50-mph increments, testing steering and handling, and evaluating the suspension.

They got the car up to 273 mph on their second pass. (Speeds are measured in averages at Bonneville, and are typically recorded between the fourth and fifth mile mark.)

“We had a fuel pump failure,” Freyvogel said. “But the car drove great. It was bumpy at 100-125 mph. Then it started smoothing out the faster I went. We were pleasantly surprised with how well it steered and parachute deployment.”

While much of the Carbinite LSR streamliner had to be built and designed from scratch, in terms of the internal automotive parts, about 70 percent are conventional, over-the-shelf parts, Freyvogel said.

“We want that as much as possible,” he said. “We want to be able to get replacement parts. The front spindles and suspension are all different. But the turbochargers and all the engine stuff—that’s all conventional parts.”

The engine setup is similar to what you’ll find on an offshore racing boat, he said.

“It’s an engine that has to withstand long, sustained, wide-open throttle,” he said. 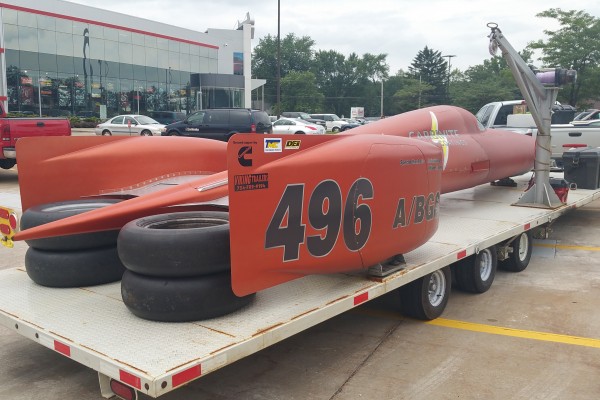 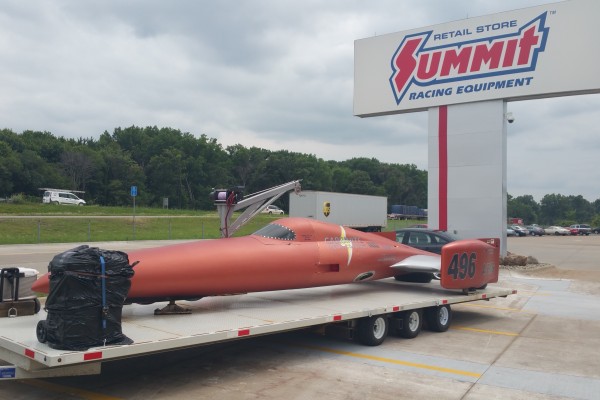 Because efficient design and engineering is paramount when building land speed racers, the builders designed the entire car by computer on the front end, and also designed parts to serve multiple functions for space economy.

For example, the car’s fuel tank also serves as a structural component. The water tank does, too, along with five other functions including holding water for both engine coolant and the intercooler—which is mounted to the water tank. The radiator is also mounted on the water tank wall and submerged in ice water, Freyvogel said.

The streamliner rides on special Mickey Thompson LSR tires that cost $780 a piece to lease from the tire maker.

“They’re experimental. There’s a six- or seven-page document that you have to sign before they even ship the tires,” Freyvogel said. “There’s very little rubber on the tread because if you put a whole bunch of rubber on the outside diameter, the tire won’t survive the rotational G load. This is also why the front tires are turned pieces of billet aluminum as the 21-inch rubber tires will not survive the rpm needed to go 500 mph.”

Craig Breedlove, 78, is a land speed racing legend. He is five-time world land speed record holder and was the first person to reach 500 mph and 600 mph in a land speed car back in the 1960s.

Wealthy adventurer Steve Fossett (the first man to fly non-stop around the world in a hot-air balloon) in 2007 was planning to break the sound barrier with a land speed record target of 800 mph in a car designed by Breedlove, called the Spirit of America-Sonic Arrow.

The program manager for Fossett’s race crew was Eric Ahlstrom. And Ahlstrom teamed up with Freyvogel and Barnhart to design this Carbinite LSR streamliner.

“He’s basically a third partner,” Freyvogel said of Ahlstrom. “Not only would Eric instruct us on the basics of aerodynamics, he would not let us take his word for anything. He would make us read the text books until we understood the concept ourselves.”

Ahlstrom built many of the molds used to build the body panels.

“He’s an engineer that’s not afraid to get dirty,” Freyvogel said.