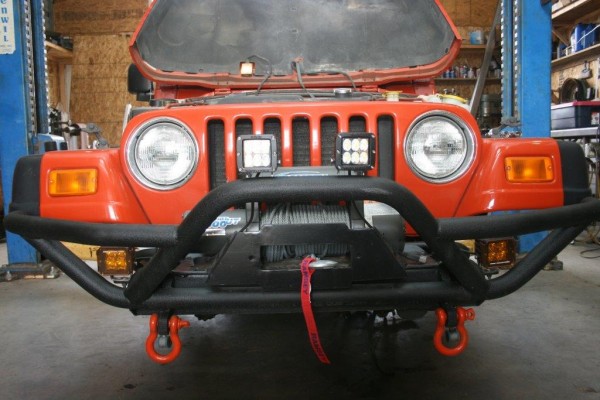 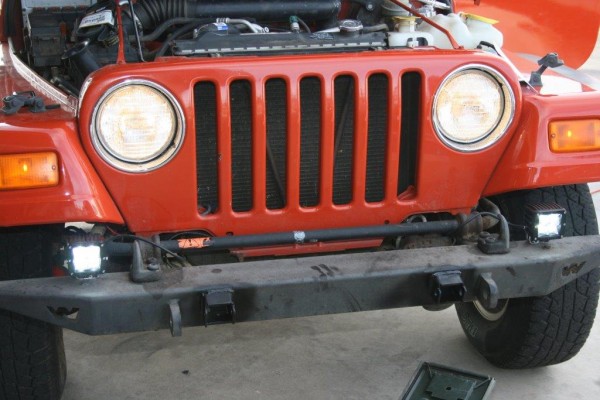 2. This 2005 Rubicon Unlimited was purchased in New Hampshire after a decade of New England winter driving, so the original but aftermarket bumper had to go.

First step is removing the bumper-to-frame bolts with an impact wrench. Rust from the winter road salt made this difficult.

Rust is readily evident on the frame and front sway bar. We sprayed on Rust Converter (which sprays on clear and dries to a dark gray while converting rust to primer), followed by Rustoleum black after it dried.

After a test fitting of the front bumper, we realized that a shim was needed on each frame rail before we mounted the winch plate.

A second fitting showed that the shims would level out the winch plate.

Kevin Lake’s cutting the flat steel for the winch plate. We forgot to order a winch plate from the bumper supplier.

With the frame rails and sway bar painted, we bolted on the front bumper and tow hooks (the steel shim is beneath the tow hooks). The fit of the winch plate was tested.

Kevin is welding up the winch plate’s strengthening rib, which makes the plate more rigid to support the Ramsey 9500 winch better.

My first view of the Rigid Industries’ LED lights, in this case the six-LED D2 units.

Wiring in the Dually fog lights, we used the Jeep’s factory fog light wiring so that I could control them with the factory switch.

Front bumper, winch, and lights are mounted and finished. As I said, the lower fog lights are wired into the OEM fog light switch, while the higher driving lights will be wired through a relay to the Jeep’s high beams.

The rear of the Jeep was much more affected by a decade of New Hampshire road salt than the front.

The one-owner 2005 Rubicon Unlimited was completely original except for Warn bumpers (probably installed before he took delivery) and steel rocker panels. This rounded-out “W” is indicative of the amount of rust on the rear of the Jeep.

Even with liberal applications of PB Blaster, removing the rear bumper was a chore.

The rust was so bad; Kevin had to drive the sockets onto the bolts with a hammer.

A couple of bolts had to be cut off with the “flame wrench”—a cutting torch.

Held in place by Vice Grips until we insert new bolts or make new brackets, the RRC tube bumper protects the rear quarter panels and provides a secure hook up if a tow or tug is needed on the trail.

19. The bumper also provides a fairly comfortable seat during lunch stops if the tailgate is open. We’re waiting until after painting to mount the swing-away tire carrier on the bumper.

Jaded is a strong word.

Let’s just say we’re not always easily impressed. But when we opened the two huge packages from Rugged Ridge and the smaller package from Rigid Industries, we were pleasantly surprised. We’d seen Rugged Ridge bumpers online and liked their looks, but were still impressed when we saw them up close. When paired with the Rigid Industries LED lights, the bumpers looked great.

We installed the bumpers and lights on our 2005 Rubicon Unlimited to give it added toughness, safety, and visibility.

The Rugged Ridge RRC front grille guard bumper added much-needed protection to the front-end of our Jeep. It’s crafted from heavy-duty .120-wall tubular steel, treated with a special coating, and then powdercoated for a long-lasting, no-rust finish. It comes with welded tabs for four off-road lights and two reinforced D-ring attachments (a winch plate can be added). The bumper’s side supports provides fender and fog light protection but does not change the Jeep’s width.

Rugged Ridge’s RRC rear bumper has a reinforced hitch and spare tire carrier. Manufactured from the same .120-wall tubular steel as the front bumper, the rear bumper has a frame-mounted platform that features a heavy-duty grid-like system with raised sides for the ultimate in protection and ground clearance. All RRC rear bumpers feature a reinforced hitch box designed for off-road accessories (not designed for heavy-duty towing). The tire carrier mounts your tire off the rear bumper, taking the load off your tailgate. With a grease fitting and special latching mechanism, this tire carrier is capable of holding up to a 35-inch oversized tire.

Up front, Rigid Industries’ Dually LED lights fill all four welded tabs on the RRC bumper. Mounted higher on the bumper’s upper loop (in order to have a greater distance for the beams to illuminate more of the trail), the D2 six-LED driving lights reach out more than 800 feet. Mounted low and wide for close-in, wider coverage, the pair of four-LED lights are for fog and snow.

Rigid Industries LED lights produce very high light output and require very little power to run them. This eliminates the need for additional power and reduces the drain on your battery compared to tradition lighting. LEDs are solid-state devices with no moving parts. This means they are better able to withstand shock and vibration than the more traditional halogen, HID, and xenon lights.

Rigid Industries D-Series Dually D2 lights are said to be the most-powerful LED lights with the highest total lumen output available in a 3 x 3-inch finned aluminum housing. They feature a six-LED design that can be used for anything from a reverse light on an SUV or truck to a handlebar light on a motorcycle or a floodlight on a trailer. They produce 2,600 lumens of light while using only 15 watts/3.8 amps of power.

Also, with a 50,000-plus hour lifespan, Rigid Industries’ four-LED lights can also be used for anything from a reverse light to a floodlight. They produce half the lumens of the six-LED design (1,300) while using a few more watts (17.3). While mounted on the Jeep’s original bumper, these lights—with amber lens covers—may have saved our lives (or at least saved several hours of travel time) when we were caught in a heavy snow storm on I-70 in a Colorado ski area. Their low-aimed beams spread light on the road in front of us, allowing us to continue in four-wheel drive.

Follow along to see how we installed the bumpers and lights in the slideshow above.

Video: How to Install AMP Research PowerStep Step Bars on Your Truck or SUV