The first-generation (1966-77) Ford Bronco has been a popular off-road vehicle since its introduction. However its successor, the 1978-96 full-size Bronco, outsold it by a large margin. Designed to directly compete with the Chevy Blazer, the big Bronco was roomy, comfortable, and could be loaded with creature comforts—exactly what the market wanted and the first-gen Bronco could not deliver.

Yet the big Bronco doesn’t get the same off-road adoration as its elder cousin. It should, though. The full-size Bronco can be built to handle the places 98 percent of us go wheeling. Based on F-150 pickup mechanicals, the truck is easy and affordable to modify; many came from the factory with automatic transmissions, power steering and disc brakes, and four-wheel drive. With plenty still around, a late model Bronco is affordable, especially when compared to the pricey first-gens.

That’s where Marc Sorger comes in.

After years of racing Mustangs in the National Auto Sport Association’s (NASA) American Iron Series (you can read about his last Mustang build here), Sorger decided to go back to one of his first loves, off-road racing. That’s one place where a full-size Bronco’s qualities can really shine.

“I signed up for Pre-Runner class for the 200-mile race the Central Oregon Desert Racing Association will be running this summer,” Sorger said. “I’m also going to run the short course series in Class 8 4×4 at Central Oregon Off-Road Race Park. When built correctly, a full-size Bronco is ideal for both types of racing to withstand the strain of racing/off roading. Its Twin Traction Beam front suspension offers superior wheel travel over a solid front axle.”

The first order of business was finding one. After looking for months for a 1980-85 model with a four-speed (a rare option), Sorger’s daughter piped up and said she and her husband had an ‘84 they would be happy to sell.

The parts list for creating a race-ready Bronco is surprisingly basic. Other than the eight-point roll cage, everything else is pretty much a bolt-on affair. In fact, Sorger’s recipe is a great starting point for building a very off-road capable Bronco. Depending on how many creature comforts you retain, the truck would be suitable for street use as well.

OnAllCylinders will be dropping in on Sorger over the course of his Bronco build. For now, take a look at what he has done so far. 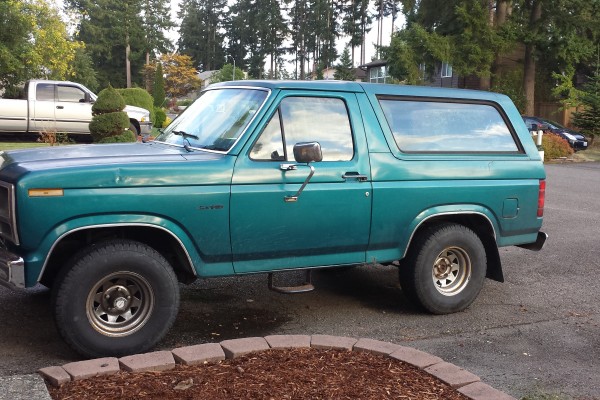 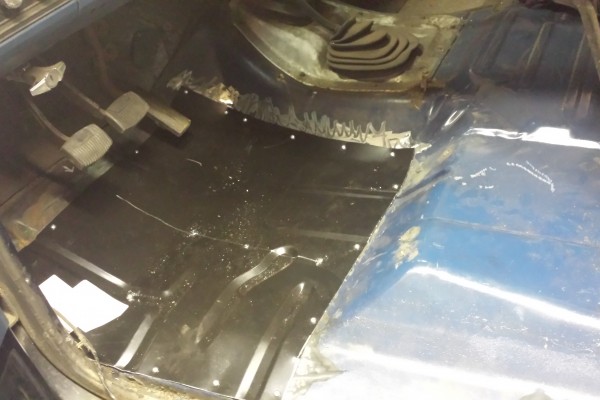 After looking for months for a 1980-1985 Bronco with a V8 and a 4 speed manual, Sorger just about gave up finding one. “I mentioned to my daughter Shelby what I was looking for, she said that her and her husband had one they would sell me,” Sorger said. The Bronco is 1984 Custom with a 302, a four-speed, and an NP235 transfer case. Dig the snazzy steps.

The Bronco was pretty sorry looking, but solid. The driver side floor pan had some rust issues, so Sorger zipped in a new Sherman Parts patch panel to fix the problem.

Even if the stock seats were legal for competition (they aren’t), they were heavy and beat up. Ugly, too.

Sorger replaced them with these Summit Racing highback racing seats and a pair of G-Force five-point harnesses.

Out comes the tired old 302. Rated at 142 horsepower from the factory, the engine was barely sufficient to move the heavy Bronco around town, let alone off-road.

To make more room for the big wheels and tires, Sorger put air nibbler to sheetmetal to open up the wheelwell openings. The resulting gaps in the sheetmetal were rolled and welded up for a cleaner appearance.

The Bronco won’t be climbing many hills in its new life as a desert racer, but it can do so if called upon. Next on the list are the roll cage and a set of Yukon Gear lockers and 4.56 gears for the Dana 44 front and Ford 8.8 rear axles. That’s coming up in the next exciting episode. (Image/Marc Sorger)