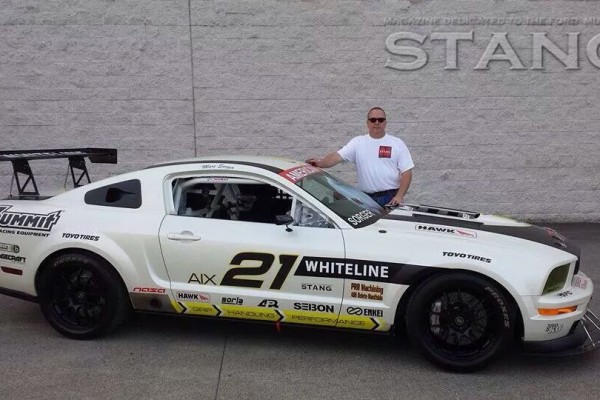 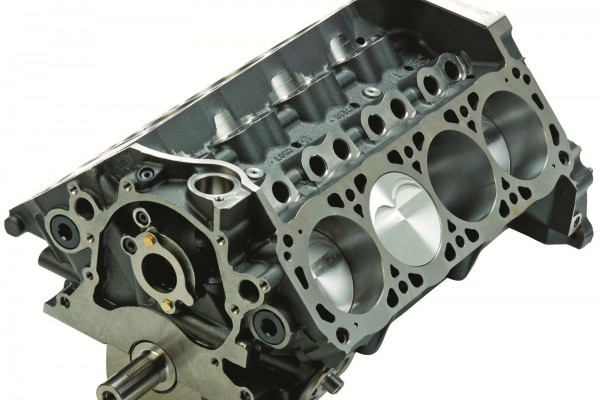 That’s Marc Sorger standing behind his 2008 Mustang GT. Marc has raced the car in NASA’s American Iron Extreme class since 2012. The Mustang has had three engines—a supercharged version of the 4.6L Modular it was born with, a 358 cubic inch Ford/Yates NASCAR engine, and now a 363 cube Windsor based on a Ford Racing 363 Boss short block. The new engine will meet the rules in both American Iron Extreme and American Iron. The latter class has stringent power-to-weight ratio rules.

The 363 Boss short block ready for its cylinder heads. The Ford Racing head gaskets are designed with a graphite core and a pre-flattened steel-wire ring so they won't brinell (indent) aluminum heads. The heads studs are from ARP, the lifters are COMP Cams Endur-X, and the timing chain set is a Summit Racing true roller.

This is the combustion chamber side of an Edelbrock Victor Jr. cylinder head. Those chambers measure 60ccs and feature blended valve bowls for improved flow through the 2.05 inch intake and 1.60 inch stainless valves. The rest of the Victor Jr. is pretty good too—210cc intake/75cc exhaust runners, CNC gasket-matched port entries and exits, and 1.550 inch dual valve springs good rated for .670 inches of valve lift when using a roller cam. No wonder Edelbrock says the Victor Jrs. are good for over 500 horsepower right out of the box.

A better view of the 363 with its new Edlebrock Victor Jrs. in place. The rocker arms are COMP Cams’ Ultra Gold rollers. The 1.6 ratio rockers have a very stiff extruded aluminum body that has an arced channel and contoured top, similar to a bridge design, to give the rockers an exceptional strength-to-weight ratio. The rocker body has additional CNC contouring to improve clearances for valve covers and springs. COMP even replaced the trunnion retaining clips with a durable spiral lock type clip, similar to the locks that hold a piston pin in place.

Marc converted the Canton Road Race oil pan to accommodate an external oil pump. Here you can see where Marc installed a pickup tube for the oil pump, which is a NASCAR dry sump unit converted to single stage wet sump pump. A return line to the oil tank is plumbed on the other side of the pan. This setup provides much better oil control and reduced crank windage compared to a conventional wet sump oiling system.

Edlebrock and Holley provide the air and fuel induction duties. The manifold is an Edelbrock Victor Jr. single plane that helps boost power from 3,500 to 8,000 rpm, right in the meat of a road racer’s operating range. The carburetor is a tried-and-true Holley 750 cfm double pumper. A Summit Racing dual-feed fuel line will keep the carburetor fed.

Here you can see the ribbed front accessory drive. From left are the oil pump, a Summit Racing front cover, and the water and power steering pump from the old NASCAR engine. You can also see the MSD Pro-Billet distributor and ignition wires.

Sitting underneath the Ford Racing aluminum valve covers are a pair of Doug’s mid-length headers. The headers are designed to fit a 351 Windsor in 1969-70 Ford Mustangs and Torinos, but are a perfect fit in the SN197’s engine compartment. The ceramic-coated headers have 1 3/4 inch primary tubes.

Marc fabbed a three inch dual exhaust system with Borla XR-1 mufflers. Note the beefy band-style exhaust clamps and the heat shields just above the collector pipes. You can also see the Tex Racing T101A clutchless four-speed transmission that Marc got from the Roush Yates NASCAR operation. It moves power back to an 8.8 inch rear axle with 3.73 gears, a Yukon Gear DuraGrip posi differential, and Yukon Gear 31-spline axles.

The 363 at home in Marc’s Mustang. The air cleaner housing is made from carbon fiber, and is another NASCAR piece Marc got with his 358 engine purchase.

The rest of the Mustang is just as good as the engine that powers it. Marc bent up the roll cage from 1 3/4 inch, .120 wall DOM tubing; the folks at The Mustang Shop also fabricated a fuel cell out of a 1970 Mustang fuel tank. Chassis bits include KW double-adjustable coil-overs front and rear, Whiteline tubular rear control arms with a Watts link and adjustable sway bar, and Baer 14 inch four-wheel disc brakes with Hawk pads. The Mustang rides on 285/680R18 Toyo Proxes RS1 tires and 18 x 10 Enkei PF01 wheels. Marc recently sold the car to a fellow American Iron competitor. He will handle crew chief and suspension tuning duties for the new owner.

Marc Sorger is a diehard racer. At age 13, he and his dad built a 1957 Chevy with a tunnel-rammed 301 small block and 5.13 gears (“I won a bunch of races and money with that car,” Marc recalled). He is licensed in NHRA’s Motorcycle, Super Street, Super Gas, Super Comp, Top Dragster, Advanced ET, Comp, and Funny Car classes; his quickest and fastest quarter-mile pass is 5.04 seconds at 304 miles-per-hour in CLASS.

He has a National Auto Sport Association (NASA) competition license that also allows him to compete at Sport Car Club of America (SCCA) and International Race Drivers Club (IRDC) events. His playground of choice is NASA’s American Iron Series, where he runs a 2008 Mustang with support from The Mustang Shop of Kent, WA.

Designed to be an affordable way for amateur road racers to compete and have a genuine shot at winning races and national championships, the American Iron Racing Series may be the ultimate Ford Mustang vs. Chevy Camaro battleground.

The Series consists of three classes:

• American Iron (AI) is limited by a power-to-weight ratio and other factors to keep the cars on an even playing field. The class is open to any American pony car made since 1960 running four, six, and V8 engines.

• American Iron Spec Iron (SI) is a spec class for 2005-2010 Mustang GTs. Cars can be modified with Ford Racing parts and performance packages and must use a spec Toyo tire.

Marc competed in the AIX class. He upgraded the Mustang’s 4.6L with all-forged internals and a centrifugal supercharger cranking out 20 psi of boost. That engine made 743 horsepower at the rear wheels, but had cooling issues that led Marc to search for another engine.

“The supercharged engine proved reliable, but I had issues keeping the coolant temperatures under control during long stretches at wide open throttle,” Marc said. “After fighting that problem for a year, I sold the engine and got a 358-cubic-nch engine and transmission that was raced in Mark Martin’s Roush/Yates Ford in 2003. We swapped the flat tappet cam for a custom Crane Cams mechanical roller cam with the same specs. We also installed a 950 cfm Quick Fuel carburetor, and I made a set of equal length stepped headers for it. That engine made 680 horsepower at the wheels, which is roughly 840 at the flywheel.”

While Marc did well in American Iron Extreme, he also wanted to be able to run in the American Iron class as well to improve his chances of winning a championship in 2014. Since American Iron is governed by power-to-weight ratio rules, he had to build yet another engine to meet the criteria. He went with a Ford Racing 363 Boss short block assembly with a COMP Cams Xtreme Energy solid roller cam and a pair of Edelbrock Victor Jr. aluminum heads. Topping the long block is an Edelbrock Victor Jr. intake with a 750 Holley double pumper.

The 363 made 482 rear wheel horsepower on the dyno and will make even more once the carburetor jetting is sorted (it was very lean during testing).

“It’s making more horsepower than I thought it would, and way more than American Iron power-to-weight ratio rules allow,” Marc said. “I will have to put a restrictor plate on the engine to make the car legal for competition.”

Marc recently sold his Mustang to a fellow American Iron competitor who will campaign the car in 2015. Marc will be handling the crew chief duties.

“The person that bought the car is a long time customer of mine and The Mustang Shop,” Marc said. “He has been road racing a stock Mustang Cobra and drives both a new supercharged Ford Raptor and a GT500, so he knows his way around horsepower. I will be crew chief on the car and setting up the chassis to suit his driving style. He will do well in American Iron.”

But that doesn’t mean Marc will be without a fun ride of his own. He loves the Mustang’s 363 power and manners so much, he’s building another one for a 1984 Bronco pre-runner truck that he will take off-road racing. It’s hard to keep a good racer out of the driver’s seat.

Check out the slideshow above as we show you the highlights from the Iron Man 363 build. Then, watch the video below to hear what all those cubic inches sound like. You too can build a rip-snorting, overpowered 363 just like Marc’s. He sourced all of the parts from Summit Racing, and the company has put together American Iron Mustang Combos so you can duplicate the build.